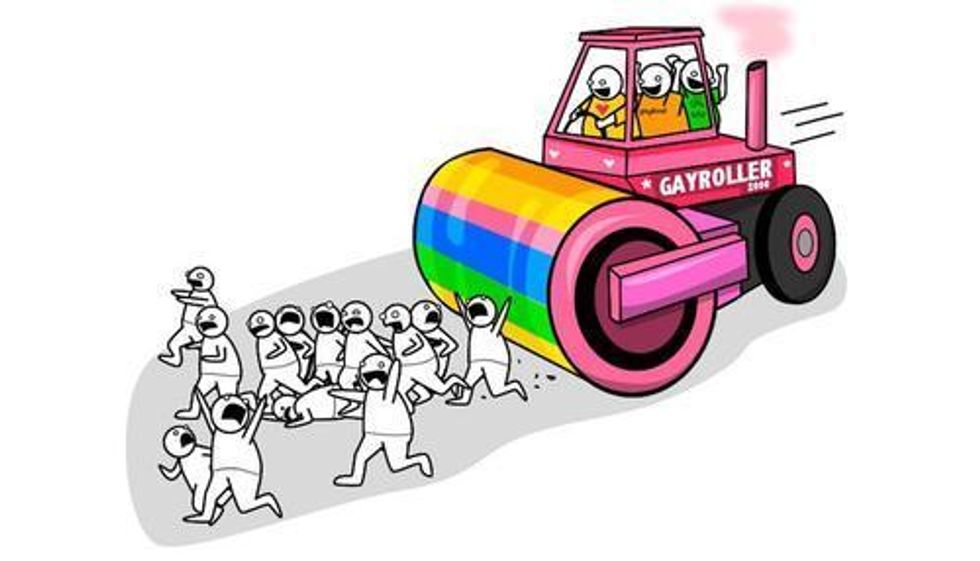 Ever since June 26, the day which will live in infamy, when the Supreme Court gave America the right gay throatcramming she deserved, wingnuts have been observed in various states of utter, pants-shitting meltdown. And much of it, against the backdrop of the death of the Confederate flag, has centered on the gay rainbow, and how it is lynching the good American Christians, and how the White House did a 9/11 to the world when it was lit up in rainbow colors. Truly we are living in tragic days.

One of the wingnuts who issued a giant wet clarion fart about how the rainbow flag is a symbol of terrorism, Holocausts, and oppression was John Nolte of Dead Breitbart, who, as we have scientifically established, is dumber than a knapsack full of syphilitic fucks, and he's quite distressed to report that the rainbow flag has claimed more victims. Five victims, specifically, four Marines and a Navy man, in Chattanooga. Yep, the gays did it:

Did the gay rainbow flag provoke Muhammad Youssef Abdulazeez, the 24 year-old naturalized American citizen born in Kuwait who murdered four Marines and a Sailor Thursday, to commit his heinous crime?

He's just asking, and the answer is no, you fucking sebaceous cyst.

Abdulazeez, who was shot and killed by police Thursday, was a devout Muslim. And one thing we know about devout Muslims is that many vehemently oppose same sex marriage and consider homosexuality a sin.

Just last month, a mad dog racist murdered nine innocent people in a South Carolina church. For weeks, the mainstream media blamed a flag — for weeks the media coordinated a shaming campaign against what many see as a symbol of hate and oppression.

Actually no, the media did not "blame a flag" for those murders, they blamed Dylann Roof, the Confederate-inspired racist who murdered those people, and this also led to a greater discussion of the role of the Confederate flag in Southern society. But good try with the news analysis thing!

The gay rainbow flag is seen by many Christians as a symbol of hate and oppression — and for good reason. Under that banner, there has been an all-out assault by the media and the Left against our religious freedoms. [...]

Moreover, the defiant act of flying of the gay rainbow flag, especially in the wake of the Supreme Court’s ruling that legalized same sex marriage in all 50 states, is undoubtedly offensive to devout Muslims, and therefore provocative.

Wait a minute, we are confused, because we haven't heard about devout Muslims crying like pussies about how the gay rainbow flag is oppressing them, so what the hell does that have to do with a crazed Muslim murdering Marines? Wouldn't Nolte's argument make more sense if one of Breitbart's commenters were released from adult daycare without a chaperone and went and murdered people because of the rainbow flag? Wouldn't that at least make it seem like Nolte is TRYING to string thoughts together like a good writer, as opposed to being a wingnut welfare pity hire?

Under that banner, on the same day of the Chattanooga terror attack, a Jewish man was physically threatened in person and on social media by Inside Edition’s Zoey Tur, a man who identifies as a woman.

Haha, you mean this thing? About how a "Jewish man" -- AKA never-nude pussy boy Ben Shapiro, who may or may not be Nolte's "work wife," ALLEGEDLY -- was made to look like the tiny, crying baby he actually is, on national television, by a transgender journalist? Well, hate to break it to ya, but that didn't happen because Shapiro is Jewish! That happened because Shapiro is a pants-shitting anger-bear who likes to talk big, but is, in reality, just a little boy who gets his Pull-Ups in a piss-soaked bunch when his minuscule worldview is threatened. As we have noted, Tur should not have let her anger get the better of her, but that doesn't mean the whole thing doesn't make us LOL.

Bring this bitch in for a landing, Nolte:

It is time to shame and marginalize the gay rainbow flag — this offensive, provocative symbol of hate and oppression must be tossed on the ash bin of history…

Before it kills again.