Dead Republican Congressman Had So Many Families 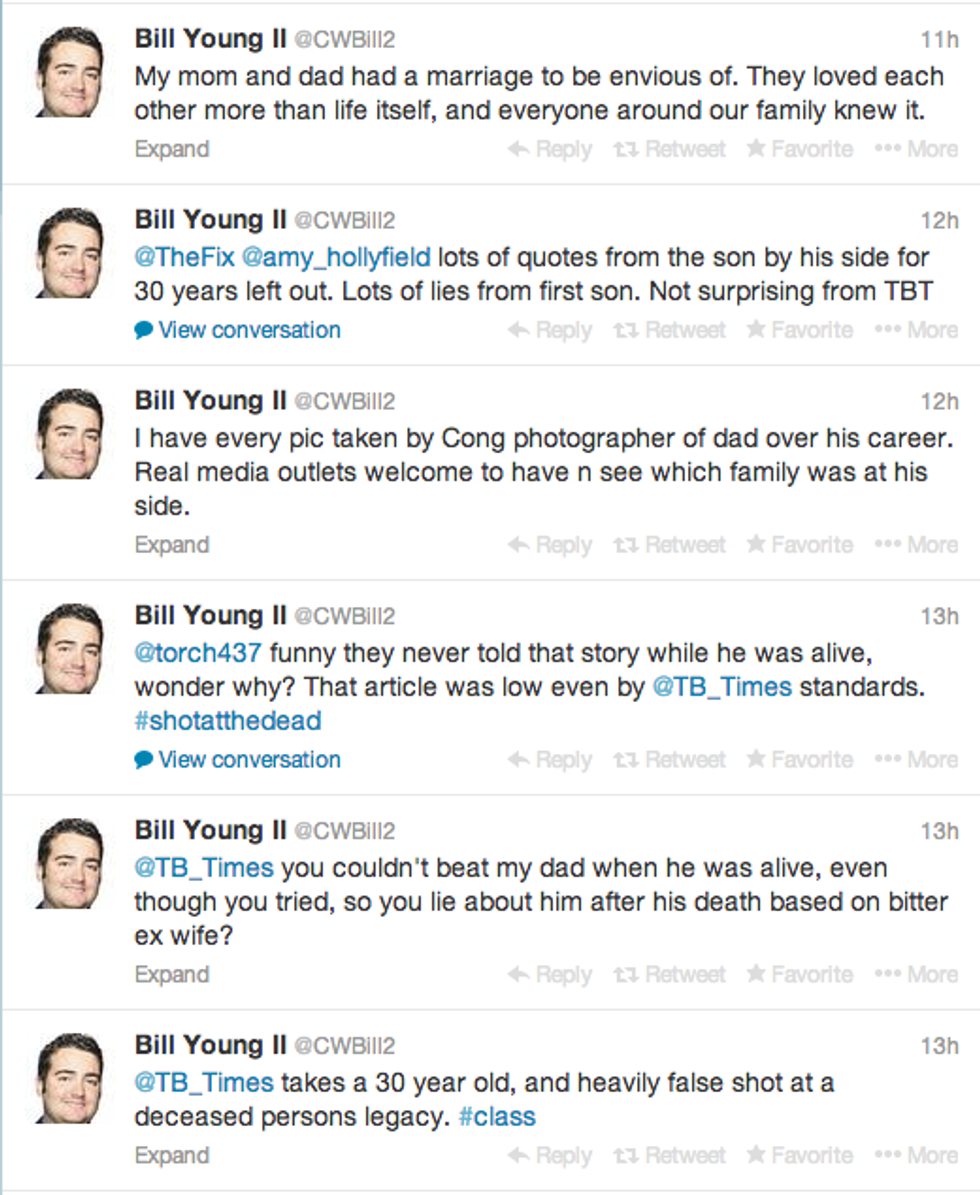 Last night a story about Sarah Palin made its way around the Internet that was so grotesquely sexist that we were put in the disgusting, angersome position of having to defend Sarah Palin. It basically called her a whore a bunch for slutty-sluttin' it up in college -- PS did you know she also spread 'em for a black man??? -- and having an affair. All the fingerpointing and whore-screaming was supposedly in the service of pointing out her hypocrisy as a "family values" Christian and Duck Dynasty and whothefuckcares, it was awful.

Being or having been a goodtime girl doesn't prove you are a "family values" hypocrite. Having a family, though, knocking up your secretary after being married for 36 years, leaving your family for your secretary, hushing it up since you are a congressman, and never seeing your three children again except to drop off some Christmas presents once while declining to come in because your secretary wife is sulking in the car at the mere existence of your former family, and then PRETENDING YOUR CHILDREN NEVER EXISTED up to and including at your funeral, all while getting "family values" awards from rightwing Christian lobby groups -- now THAT is what we in the business call "a real lulu"!

Bonus points for having a new wife so crazy and bitter and insane and awful, we think she might be an actual witch.

The Tampa Bay Times's story on the late Florida congressman C.W. Bill Young is a hell of a yarn. You will want to read it and come back here please.

You read the interviews with the sad kids, and how they mostly stopped trying to call or see their dad after a few years went by without hearing back. You read that one of their stepbrothers announced their existence from the lectern at the funeral -- he didn't think it was right that their very personhood had been memoryholed. And you got to the interviews with Beverly, the erstwhile secretary and "new" wife of 30 years.

Let's relive it, together!

Beverly Young and the congressman's first family also disagree about what transpired around the time of the divorce.

Beverly Young says the congressman harbored a deep resentment because his children rebuffed his attempts at contact after the divorce — a direct contradiction of accounts given by his first family.

"Bill had no relationship with those kids," she said in a phone interview. "Not by his choice, by their choice."

Bill Young II, 29, the congressman's first child with Beverly, agreed that Terry and his sisters could have done more to stay close to their father.

"Those things can go two ways," he said. "They say he didn't initiate anything. I didn't see them show up at his door."

Well, no, Bill Young II, they said they tried to initiate contact lots of times, and he wouldn't call them back. Don't feel bad! You are not responsible for your hideous parents! Anyway, wonkers, remember the name Bill Young II, because he is about to have an epic Twitter meltdown later in this post!

But let's get back to Beverly, she seems great!

To Beverly Young, Terry [Young's son] has come forward now because he "is trying to get rid of his guilt for being a horrible son."

Young even once claimed that he "never had a son named Terry," his wife said.

Mrs. Young, 58, said she has wondered if her husband's first children resent her for being younger than they are.

Asked whether any photos of Young's first family were included in the photo montage at his funeral, Mrs. Young replied: "Hell, no. Why would I do that? Why should they be? They played no part in his life whatsoever. Consider that courtesy of me."

"Consider that courtesy of me." Well then we shall!

After that interview, Beverly Young, who is often outspoken about issues she feels passionately about, emailed the Times questioning this story.

"I have a hard time believing after a 30 year loving, successful marriage you would attempt to make Bill's life and marriage to me look anything less than it was," she wrote.

" … It's sad, that after thirty years [first wife] (Marian Young) still can't accept the fact that he never loved her. … She attempted to make him stay in a loveless marriage by having her children, but once they were out of his home and grown adults he wanted to experience real love, life and happiness. And that's what we did. We did it when, where and how we wanted to."

Man, it must be so hard to be Beverly, with all those people insisting on continuing to exist even when you don't want them to! But how is your relationship with your own family, Lady Macbeth?

More recently, a division within Beverly Young's family emerged over Bill Young's vacant House seat. According to his wife, Young hoped that David Jolly, a lawyer who had served as his aide, would succeed him.

Bill Young II recently told the Times he was unaware of his father having a favorite candidate. He supports Kathleen Peters, Jolly's opponent.

"You have hurt me beyond belief," Beverly Young told Bill Young II after a Dec. 6 Tiger Bay meeting as a Times reporter stood nearby.

When asked whether the conflict over endorsements had damaged her relationship with her son, she replied: "I have no relationship."

Sure. We're sure she will. She seems very loving, a very good mom with a very good heart and not a woman with what sounds like borderline personality disorder or Livia Soprano at all.

Just remember, everyone, the timeless lesson of Lilo & Stitch: "Ohana" means "family," and family means nobody gets left behind unless you are the late beloved Florida congressman Rep. C.W. Bill Young, then you just get another one and fuck em.