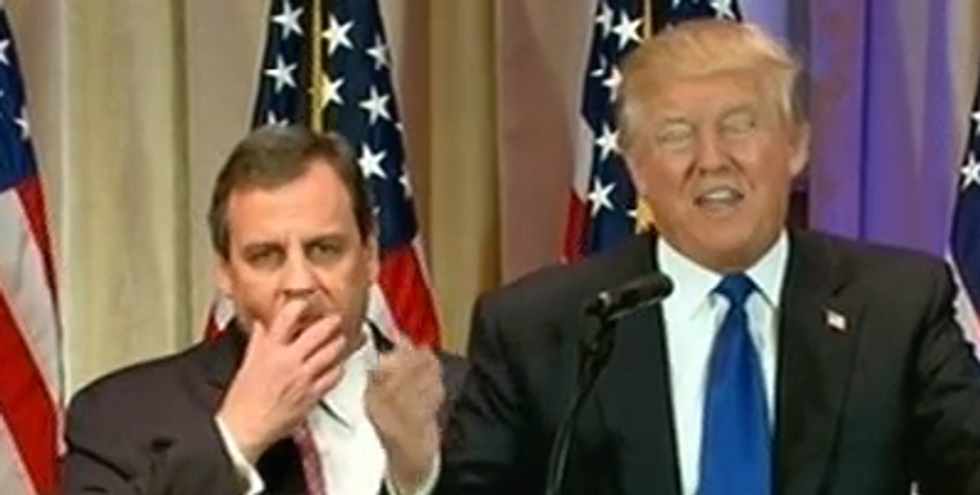 Chris Christie knows how to pick a winner SEE WHAT WE DID THERE?

[contextly_sidebar id="cfivKFAyibRrhSEgXuMWixw0goWRefAn"]So, what did everybody do last night? Did you make history by being some sort of lady girl Vagina-American who won Super Tuesday? Did you give a speech at the Mar-a-Lago resort about how your name is Donald J. Trump and you Made America Great Again on Tuesday by winning all the Republican contests? If your name is New Jersey Gov. Chris Christie, you stood behind Trump and managed to convey ALL THE EMOTIONS you were feeling -- bitter, confused, forlorn, "No Lunchables In My Suit Pocket" -- while America watched. Also, you picked your nose.

[contextly_sidebar id="MlLqXdwT2MDomvnbBSQHgMz9NhhOES1J"]Truly, y'all, it was pathetic. Christie endorsed Trump last week, because Christie is pitiful and rude and obnoxious and a huge loser, and the only way for his political career to go anywhere at this point is to solar eclipse the shadow of a rude obnoxious loser who is actually winning. And he doesn't seem to be too happy about it, no siree!

What were you lookin' at, Chris Christie, as you and Trump stood there looking like actual human characters on "South Park"? Were you thinking about all the #sads you are feeling because your approval rating among your own New Jersey voters is now only a measly 27 percent, and even those measly few voters probably kinda hate you also too? What happened? New Jersey used to LOVE YOU! (Or so you said, LOL, delusional fuck.)

Were you wondering how it could be possible that SIX newspapers in New Jersey -- real newspapers, not Girl Scout Cookie Achievement Newsletters or anything -- are now calling on you to resign from the only political job you have aside from fluffer-slobbering all over Donald Trump's grundle-muffin, for the CRIME of said muffin slobbering? How could anybody be so mean?

[contextly_sidebar id="EYg1wHgS3ZUIdjKxkCwzVbRAQTtvqUi1"]Did you have a brief moment where you tried to stoically remind yourself that goddammit, you're Chris Christie, and for fuck's sake, you used to BE SOMETHING? People used to think YOU were the biggest Republican dick in all of America. You were a dick to women! You were a dick to Jimmy Carter! You had hot sex tips for how to put your waffle cone in your lady without making babies come out! You even had a whole "Bridgegate" scandal associated with your name, a scandal people really cared about a whole lot, you bet, oh how exciting that story was, tell us more!

YOU WERE A DANCER FOR CHRIST'S SAKE.

[contextly_sidebar id="S9OFlZO43gq9ZfYwM0lKP7sf7omJCt7U"]But it's all over now. You are Donald Trump's bottom, and he is a BRUTAL top. So might as well pick your nose, eat more snacks, roll around in your piddlyshit $5 million fortune and be sad some more, the end.