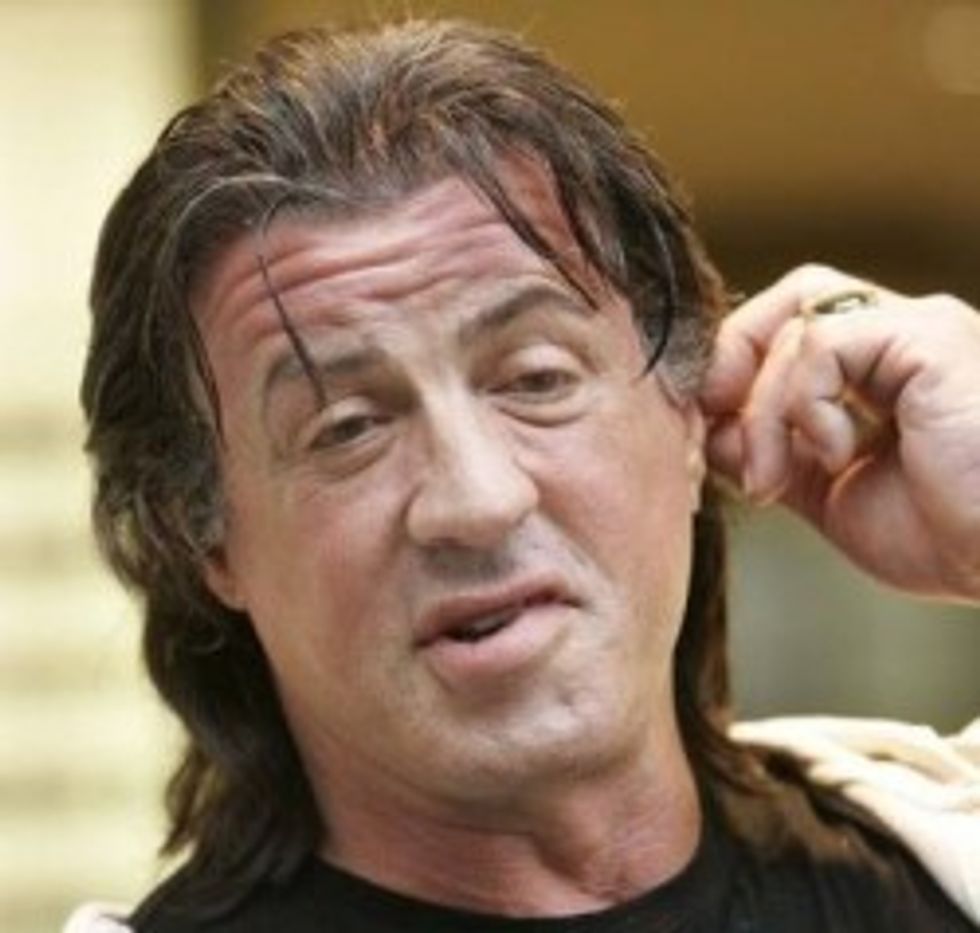 About 35 years ago, amentally challenged man named Sylvester Stallone somehow typed a movie screenplay and sold it. The movie was pretty good, and the role was also written for Stallone's "acting," as the story told of a retarded man beaten to death by a handsome black American, while people cheered to disco music. Now, this same actor is writing a new screenplay (a Twitter post) about how Barack Obama is a "Manchurian Candidate." Let's hope this Obama didn't get elected yesterday!

Like all action-movie actors of the 1970s/1980s who haven't yet died or been so totally forgotten that they're not even allowed a column on World Net Daily, "Sly" Stallone has either become or always was a drooling wingnut. Have you ever actually been around actors? While most are hapless liberals, there's a special category of very short, very dumb steroid cases who, without fail, become jingoistic laughing stocks in their dotage.

So what did ol' Rhinestone have to say about Nobama, who did not actually run for re-election yesterday as it wasn't a presidential election year? (We know! Hard to tell.)

We couldn't really settle on a "representative Twitter," so here's the whole string:

# Dear one @shacmail You are right I just pity intolerant bullys who think they know how to run the but HATES any one who might have ideas 11:08 AM Nov 2nd via web

# NO @clontz I am not , how bout you ? are you smarter then the characters I play? Written any produced screenplays lately? Enlighten me .... 10:55 AM Nov 2nd via web

# To emotional,people, I'm just mixing it up.Getting the blood going ! Makes ya passionate, don,t it .Good! Happy with things? OPINIONS? 10:48 AM Nov 2nd via web

# A great quarterback is only as strong as his team,Right? The MAN need a stronger line, people! 10:40 AM Nov 2nd via web

# The last MAN started the mess now the NEW MAN wants to make permanent.... Ignore the lies, OPEN your eyes! 10:32 AM Nov 2nd via web

# the Manchurian Candidate was a movie about fake president who was put there by foreign enemies to destroy America . Scary concept. Rise up! 8:44 AM Nov 2nd via web

# I voted did you? Gotta get the Manchurian Candidate out of the drivers seat before were ALL soaring off a cliff into Oblivion...Be smart. 8:35 AM Nov 2nd via web

So, among other things, Stallone either never saw or completely missed the actual story of The Manchurian Candidate,, which is about a brainwashed right-wing elitist sent by a playing card to kill a presidential candidate. Whatever; "Manchurian" sounds Kenyan.

Simple licensing procedures could prevent all of this heartbreak and shame, while making America safer in the process. Do you let a toddler drive a semi-truck? No, of course not -- not without a license. Twitter use must be licensed. (The fees could either make a profit for Twitter, or reduce the "National Debt.") [AV Club]