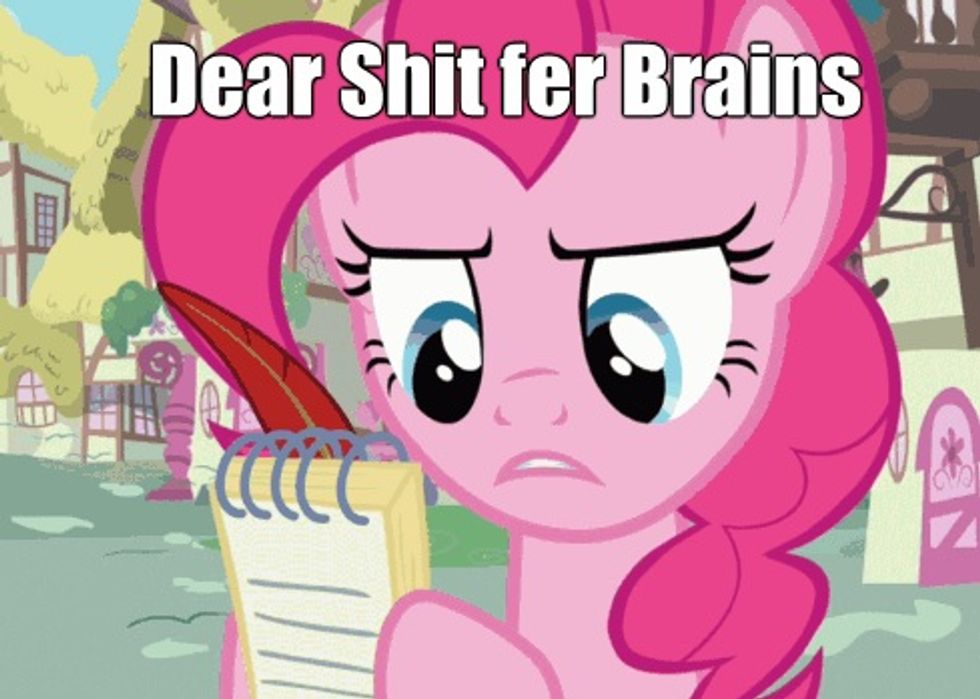 Happy Labor Day, workers of the world! While you and your grillables marinate in anticipation of the big holiday Bar-B-Q/bonfire, we bring you these offerings from the comments queue. Just be careful not to leave them out too long -- like mayonnaise, they go bad in the sun.

First up, since it mentions jerbs, we have this reply to our piece on North Carolina senatorial candidate Thom Tillis, who will defeat Kay Hagan by writing numbers on a whiteboard and calling it math. "Scottyncstate" seems to have mixed feelings about his home state ... that, or he thinks Yr Wonkette is based in North Carolina?

Wow ... What thoughtful debate! So glad I left this redneck pool of idiots. You want a democratic legislature and a return to massive unemployment? Go for it. I'll sit back in my adopted state of Texas laughing my a$$ off at you while we continue to create 49 out of every 50 jobs in the nation. Oh, and that's REAL math (although I doubt any of you haters know how to do that)

That's pretty impressive math, and we completely believe it, because it's real math. You do have to wonder what wingnut talking point Scottyncstate is mangling here, or if it occurred to him that he's saying that Texas has 98 percent of all new jobs, and the rest of the country has to fight over the remaining 2 percent. Or maybe he really believes it.

Another Texas comment, this time on our story about the totally realthreat of an ISIS attack coming out of Mexico -- a "threat" that has been largely covered only by paranoid rightwing sources. Your ugly vile snarking about how Texas would be no great loss was not appreciated by "Jeff_Childers," who is probably named Wally or something:

I can see why those who have commented so far would like to give up Texas without a fight, can't stand the thought of hard working people being self sufficient and creating the energy you all crave to power up your blowhard verbal diarrhea machines. You can all rest easy in the knowledge that if we are invaded by terrorist in Texas they won't make it to you simply ass, fuck nuts who think the US government will protect you and your poodles. Texas should be its own country and not associated sigh a bunch of spineless pussies.

We suppose this is where we get to point out that "self-sufficient" Texas is actually pretty good at taking money from the federal government, possibly because oil is not edible. In fact, in terms of tax revenue versus government support, Texas is the 18th most dependent state in the nation. We aren't especially worried about nonexistent terrorists, Wally, but we are a wee bit concerned that Texas is making the rest of the country dumber.

Jeff_Childers was back 30 minutes later to complain that Wonkette is suppressin' him:

I must fall into the category of "you hate me" because you won't post my thoughts and all you want to hear is your own bullshit. Good luck ever finding truth when you are only listening to yourselves regurgitate each other's bullshit.

You know what, Wally, that's a risk we're willing to take, even if it deprives us of your brave truth-telling.

Our story about the Minnesota man tased by police for sitting in public while black, and then criminally thinking he didn't have to comply with their "Show us your papers" command, drew this legal analysis from "c0mons3nse," who is one

It doesnt matter what color your are...you could be neon orange, you have to identify yourself to the police

Actually, no. As we said pretty clearly in the article, under Minnesota law, you don't have to provide any identification, even your name, unless police have actual suspicion that you're engaged in illegal activity. The police who harassed and tased Christopher Lollie never accused him of a crime; they just knew he was a criminal because he was a black man who didn't want to show his pass for being in public.

An important correction from "Mouse_31," who pointed out that we were completely wrong in our piece about Charles C. Johnson's very credible suggestions that Michael Brown had a juvenile murder record, maybe. We had noted that it was pretty amusing that Johnson had tweeted a message "confirming" Brown's juvenile record two days before he tweeted another message saying that "two law enforcement sources" told him Brown had such a record. Mouse_31 wants the world to know that we unfairly besmirch Mr. Johnson:

Hate to rain on the parade, but he did actually tweet about his tip at 12:08pm before tweeting the confirmation at 7

Excellent detective work, Mouse_31! Maybe you could explain that to Mr. Johnson, who presented the chronologically impossible "sources" and "confirmation" in his very own post:

None of this, of course, gets to the real point: Whatever juvenile record Michael Brown may have had, it has no bearing on whether his shooting was justified. Maybe Officer Wilson had psychic awareness of Brown's juvie record?

We got an outpouring of plain ol' unfiltered racism from "sallieparker," who was driven to an unaccountably strange rage by a June article in which human cumstain neckbeard Gavin McInnes branced out from his usual repertoire of MRA misogyny and launched into a racist tirade about Neil deGrasse Tyson, who he figured looked like a thug in the 70's. We can't tell if Sallieparker is trolling or not, considering the pretended "funny Asian Engrish" typing, but hey, she sent a comment, it's racist, and this is where we run the stupidest comments:

You give me brreak, Joe! Your pictured Dyson's negro not cool-and-groovy-looking, he just look like every other of his breed in the 1970s. Ugly-ugly. Gross, you might say.

Sallieparker's email address is from a "uk" domain -- so pip-pip cheerio white power to you too!

Also, speaking of the racisms, "runlikehell2" chided us for being entirely too naïve in our piece on one KKK faction telling another to stop being so openly racist. You see, runlikehell2 explains, there actually is no such thing as the KKK!

You guys realize that these Klan organizations are all run by the feds? No, seriously. The feds hire people to infiltrate and run these organizations so they have a list of potential terrorists.

OK, but if that's the case, mister smart guy, then who took Joey Ramone's baby away, huh? "FBI" and "DHS" don't even rhyme with "away."

Do we have any tone trolls? We most certainly do! "Ledphoot" was very very sad that we would stoop to making jokes about the tragic death of an innocent "instructor" at a tourist attraction where it's loads o' fun to let your 9-year-old fire a fully automatic Uzi:

I saw the video and it is truly sad that somebody lost their life and the poor child will be emotionally scarred because of what happened. Reading these comments is even worse than seeing a man lose his life at the hands of a child due to a case of bad judgement. People exercise bad judgement all the time. Texting / Drinking and driving leads to a lot of deaths and injuries. Not monitoring children around swimming pools. Falling asleep with food in the oven. Many sports involve unnecessary risks. And poor parenting skills are abundant in this country, it's obvious from many of these posts. How about a little compassion and sympathy for what happened? Quit trying to make a political point due to somebody's lapse of judgement.

Excellent point. Who among us hasn't handed our tiny child a military-grade submachine gun for fun, with unfortunate results? Why do you monsters insist on treating a legitimate business that rents out automatic weapons to 8-year-olds (with parental permission, of course) as if they were somehow inherently irresponsible?

Also, "will" was very disappointed with the manner in which we criticized that Republican Senate candidate whose campaign ad included a clip from an ISIS beheading video. You see, we apparently failed to meet will's high standards, because we condemned the ad, which he liked, but we were also "biased," which he didn't like:

I was looking for a non-biased condemnation of this video, and aside from the Christian Science Monitors and the Huffington Posts, I looked here. Unfortunately, this is all over the place with juevinile tones to ice the cake at the end. I know, my comment will never appear, because this is for Tumblr kids who get sick of pictures.

God, you simpletons! Will you never cease your puerile, biased condemnations, with pathetic, childish tones icing the cake? Where, oh where, will "will" ever find a website that meets his high standards? You poltroons are truly beneath his notice.

Also, "will" realized, too late, that he'd included a typo in his comment. Well, by gum, he is NOT going to let us mock him for a typo, either, because we're just the kind of immature jerks who would attempt to assert our superiority (with NO JUSTIFICATION) over an intellect like "will" simply because he made an innocent typo:

Juvenile, even. (Yes, a typo... not only am I used to comment systems functioning without issue in 2014, I\'m also spoiled and used to \"edit\" privileges). The bratty tone tells me I have to cover such asinine bases.

God, you morons make "will" sick! Get out of his sight! Also, hahahaha, the stupid fuckhead inserted a backslash right in the middle of "I'm." What a stupid fuckhead!