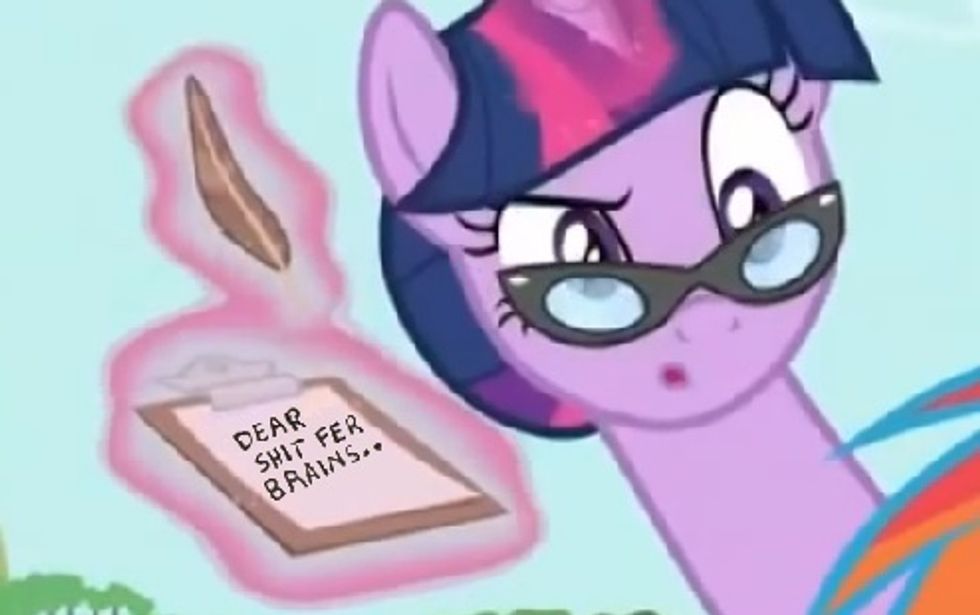 Attention, Wonkerinos! We have an important message -- five, actually -- from a reader who was miffed that today's Wonket did not giveAlex Jones and his merry band of truthseekers their due. "Groovychickedy" just wants to set the record straight for us:

One cannot simply brush Alex Jones under the carpet anymore. Alternative media has grown 1000% in the last two years. No one believes what the TV is telling them anymore. Infowars must be more legitimate than you are making them out to be, Senator Josh Miller had to de-activated his Facebook account due to the backlash. When has one of your stories made a Congressman issue an apology or cause them to de-activate their social media accounts? Guns are baked into the bread that is America. The Second Amendment protects all the other amendments, even your right to speak like an unAmerican Communist.

Damn straight! If Alex Jones and his Keyboard Kommandos aren't legitimate, then how could they possibly troll a Rhode Island state senator's Facebook account into submission, huh? He had to de-activated it! If that's not evidence of a relentless pursuit of the facts, we don't know what is.

Protip: Do not bake guns into your America Bread without first ensuring that the clip is empty and the chamber is clear; dry-firing into the flour bin is recommended for safety.

And then, shortly after groovychickedy realized that we moderate comments, we got these messages:

Why, thank you! We laughed, too! Especially at your complete ignorance of how the First Amendment works -- you definitely do understand it every bit as well as you understand the Second! You see, as we like to explain to you liberty lovers from time to time, Wonkette is a private bidness, as Saint Molly Ivins would say. We choose to have comments here, and, as private bidness people, we like being able to say who can stink up our virtual parlor with their big smelly feet and unwashed swimsuit areas -- and that would be our dear, beloved commentariat, not a bunch of shouty demandy strangers who think nothing of jumping up and down on the furniture and insisting They Will Be Heard. You want to exercise your First Amendment Rights? Go start a blog. You might also want to read up on the difference between "censorship" and "editorial decisions." Hint: our domain name ends in ".com" not '.gov"

Then groovychickedy did some Internet Detectiving, looked up our server and web host, and sent this blistering J'accuse:

Wonkette is registered in PANAMA, not even USA... +507.XXXXXXX

Which would be pretty spiffy detective work, proving us to be dirty foreigners, except that when groovychickedy looked up the "507" they decided it had to be a country code (Panama) not an area code (Minnesota). And to think that George HW bush went all that way to grab Noriega in Panama when he might just as well have been in Rochester.

Finally, this serene kiss-off from our latest Censorship Victim:

You know, If I were you, I would blast out all my comments and make me look like a fool....I gave you enough food to feed the trolls on this site for days. Just a thought for the thought police.

Aww, bless your heart. Guess you showed us. You know what finally gave you the victory over our dumb censorship? Your gun, which protected all your other rights.

We also got a couple of flag-bedecked comments from "reddawn 89a," whose avatar simply must be seen to be appreciated. Reddawn89a took some time out of their busy schedule of examining the pixels on Obama's birth certificate ad shouting "Wolverines" to let us know that they can't wait for Dinesh D'Souza's exciting new movie "What If George Washington Had Never Been Born Because Obama Killed Him?"

Looks good, I'll definitely watch it. D'Souza is a smart guy, unlike the depraved trash that runs this so-called media outlet.

Oh, we get it -- if filthy lieberals make fun of it, it must be GOOD! This guy is playing 11th-dimensional pocket pool, to be sure. Our most recent Derp Roundup, which looked at Matt Drudge's truth-challenged claims about paying a tax penalty for Obamacare before the IRS is even set up to collect those fees, also drew this comment:

Unlike the depraved garbage that is this website, Drudge's website actually offers a legitimate source of useful knowledge and information.

"Tword7" just wanted us to know that they would no longer stand for all the racism in our piece the other day about Mitt Romney's heroic pantsing of Barack Obama's wimpy response to Russia:

haha... this article feels like a support group for liberals. Listening to you guys sound off on Romney sounds a lot like the stuff only the 1960's deep south racist haters could produce. Racism isn't really an issue anymore, but thanks for reminding me that true unamerican hatred and anti-mormon bigotry is still alive and well with your pathetic group of far left neanderthals.

As far as we could tell, the rampant anti-Mormon bigotry consisted of one comment that made apune, or play on words, out of "moron/Mormon," and another comment that mentioned "magic underwear." God, we are just such monsters. Tword7 continues:

Romney was the best president the US never had. He has more wisdom, class, and good judgement than Obama's entire family. But thanks for giving us the president who you would rather "have a beer with"... what a joke. Enjoy that beer while our country becomes everyone else's bi*ch. We need another military draft. Once we start bleeding again for what we believe in, then all the pathetic liberal ideals will crumble just like the sand it is founded upon... I cant wait for the resurgence of old fashion American values and hard work to make a comeback. Articles like this and the people that like this stuff remind me just how sick the liberal mind actual is and gives me encouragement because there is no way it will prevail... "and great was the fall thereof"... Cant wait.

Oh, golly, have we ever been shown the error of our ways. We will get right to work on working hard and having good old American values, starting with cleaning the sand out of our comments queue. And then we'll look forward to tword7's support of the only bill to resume the military draft, which was introduced in the House by that patriotic conservative, Charles Rangel.