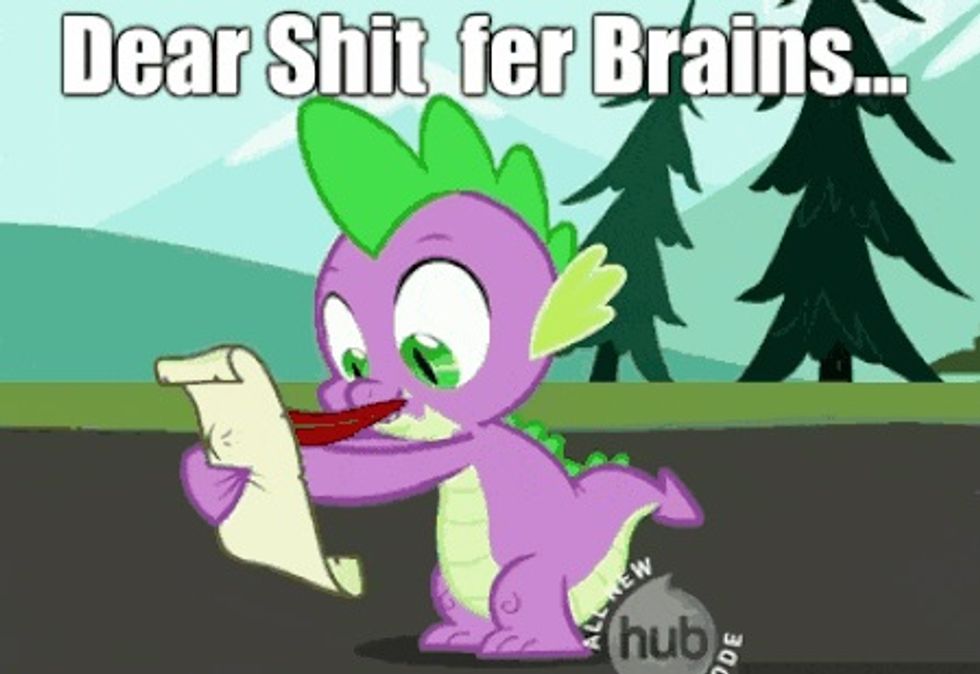 We have been down to sump out the comments queue, and man, what a mess. We have quite the assortment, and let's get right to it with this brief note from "Vfunct," who was not impressed with our headline about thepoor schlub who got fired after he told the story of the Great Palin Bumfight of 2014. That wasn't really all that hard to follow, we thought: "Palins Scalp Witness To Their Epic Snowbilly Battle As First Sort Of Reported By Your Wonkette." You guys got that, right? Well, Vfunct was Most Displeased:

Can you rewrite the headline in English please? Also, please don't use nerd-words like "wonkette".

Why can't you call your blog something nice, like "Buzzfeed" or "Gateway Pundit," huh? Even so, Please don't use nerd-words like "wonkette" is definitely going on the list of possible coffee mug slogans.

Would-be commenter "dutchs2014," who apparently would like to exhume, reanimate, and run Ron Reagan for something this year, was frankly annoyed that the partygoer felt he had been ill-used for talking to the media:

Oh, yeah, if I have parties at my home I'd LOVE to hire someone who will blab every sordid detail to the media.

First off, we love that conditional, and sympathize -- if we had parties at OUR home, we'd have to vacuum! -- although if we had parties where the Palins showed up and went Full Methbilly, we certainly wouldn't fire anyone for sharing the surreal event with the world. Unless we found out he'd invited them.

We got called out big time by wannabe Grammarsturmbannführer "aamiller," who noticed that we had A ERROR$ in a line from our piece on poor old Rep. James Clyburn, who merited a BREAKING!!!!!!! notice from Fox News when he mistakenly said "sexting" instead of "texting." And boy oh boy, did aamiller ever get us good!

Or maybe aamiller could have just noted that we shoulda said "gets" instead of "get," because after all, "also too" is not an error, it is a Wonkette Running Gag (#724 of 11,390 and counting). Still, we feel right badly about that, and will see to it that we never make another typo ever again, for this is truly the most important thing a person could ever leave a comment on. Sheesh. It's not like we mixed up Tennessee and Kentucky again, after all.

Reader "thisjakes" caught a more serious sin in our comments section (which we do not allow): Comment Plagiarism, which is SRS BSNS! And dear Wonketteers, it pains us to say that thisjakes is correct: One of you did indeed swipe a comment and repost it on Our Fair Mommyblog. In our story on the imminent arrival on Meet the Pressof priapic nepotism beneficiary Luke "Shut the Fuck Up Luke Russert" Russert, one of you just plain went all Rand Paul and stoled a line from a comment left on the Crooks & Liars blog. And thisjakes let us know about it. Three times, several hours apart:

You could kind of see the forehead veins bulging, right there on the computer monitor.

Our Big Mark Sanford Divorce exposé drew two comments from "resharpen," who has... issues, we think. The first was fairly succinct, and fairly smoked with fury:

what a jerk Sanford is He is the Narcissist from Hell, He always blames everything on someone else. He is Never at fault. And he does whatever he wants - Appalachian trail, my foot. And he didn't hire a lawyer????? Oh yeah, he just assumed he'd win, cause he is soooooooooo perfect, And how can he invoke Jesus? Doesn't he remember that one of the 10 Commandments says NOT to commit adultery??? and Snakey Sanford: good luck THIS TIME on getting another gf. Yeah, you are just SOOO trustworthy; any woman in America would want you. (any without a brain, that is).

Twenty minutes later, it was clear that "resharpen" had more to say. Much, much more to say:

I am going through a divorce, and YEP, MY husband announced to me that he will be his own lawyer. He and Sanford may be twins, separated at birth. He and Sanford could have a go at 'Who is the Biggest Narcissist' contest. Like Sanford, my estranged husband acts superior to me saying "I will NOT waste money I must use to put my kids through college on some lawyer". when I told him that I am keeping my lawyer, he began, as he always had, to Bully Me. And I would NOT be surprised one iota if Sanford is as big a bully. My husband started screaming that I, by having a lawyer, was depriving my children of their 'college money'. I hung up, and texted him that: 1) If he was so concerned about our kids & money for college, he shouldn't have taken so many out-of-state vacations since we have been separated, And then gave him my lawyer's name and tel. no, and told him to call her with all his 'concerns' about the divorce. I can only imagine the bullying Sanford put his ex-wife through, and his now ex-Soul Mate, No wonder his ex wants him to get counseling, especially in 'anger management'. Thats code for BIG BULLY. Narcissists talk a Great Game, but after a while they show their true colors, and they ain't pretty. Ladies, and men, if you meet a narcissist in the road, RUN like Hell!

We are genuinely sorry to hear that you are having such a rough time. Why don't you just have a couple more Appletinis and tell us all about it? We promise we won't just go off and watch videos while you type. Heh. Key and Peele are hilarious.

And finally, a slew of comments from "chastityrocket," who we really wanted to think well of because that's a pretty good pseudonym, and because his/her/its heart's in sort of the right place, disgusted at the awful behavior of Adrian Peterson. But wow. Chastityrocket loses contact with ground control, is what we're getting at. It's often a pretty good clue that a comment may be headed for the Dear Shitferbrains column when it uses second person this strangely. Who on earth is the "you" that chastityrocket is addressing here? Yr Wonkette? Adrian Peterson? Other commenters? "Bob" from Twin Peaks?

30 -40 years ago you might have gotten away with this. This is simply child abuse. because his daddy did it to him doesnt give him the right or justication to beat the shit out of a 4 year old sick bastard. daddy diddles a child and then the child molests his kid that ok with you? or how about 30 year ago it was ok to call Black people Niggers. This is unacceptable. I hope that nasty bastard never breeds again or plays again. we idolize the wrong people in society. Teach your children to grow up like a decent human being not a sad masochist.

We like that "sad masochist" typo, to be sure. Somewhere in the single minute between their first and second comments, chastityrocket hit the CAPSLOCK (and possibly the Angry Powder) and never turned back. Here's a sampling:

Sounds like you got ahold of some Orange Sunshine there, chastityrocket. Everything's going to be fine. You're very high right now. You'll probably be that way for about five more hours. Try taking some vitamin B complex, vitamin C complex... if you have a beer, go ahead and drink it. Just remember you're a living organism on this planet, and you're very safe. You've just taken a heavy drug. Relax, stay inside and listen to some music, Okay? Do you have any Allman Brothers?