Deleted Comments Of The Week: An Armed Society Will Teach Black Teens Some Manners 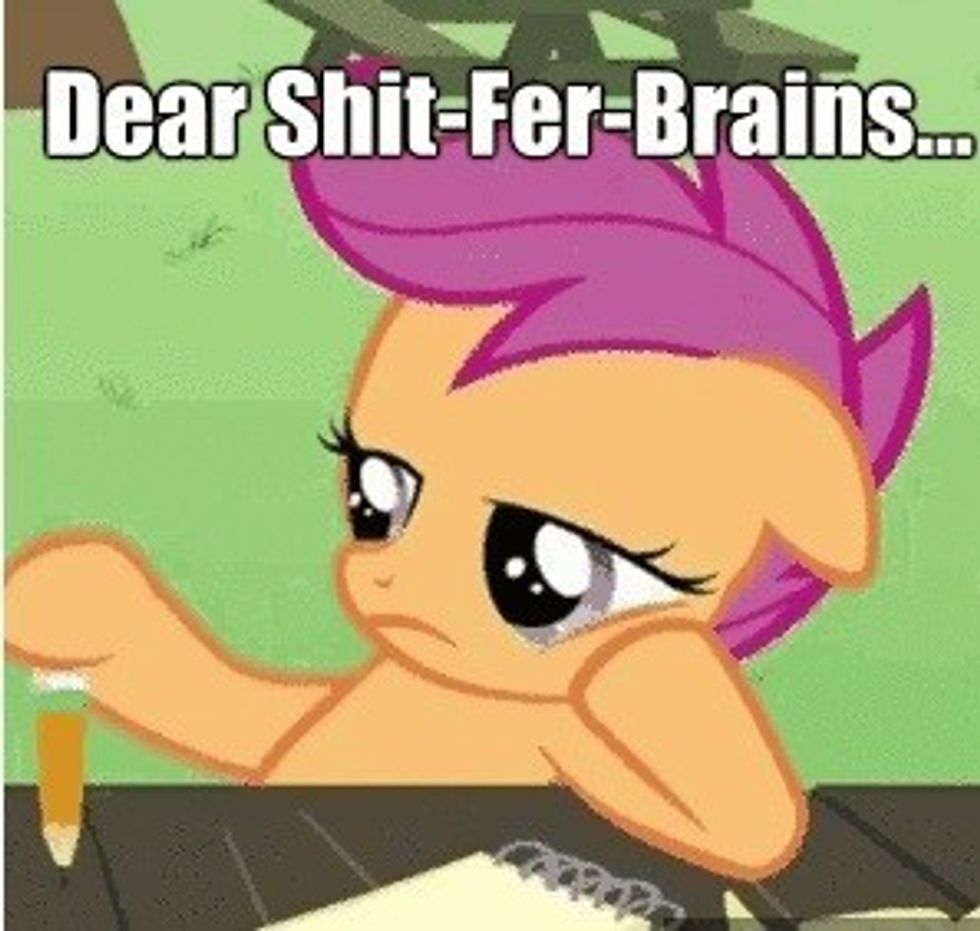 It's time for our weekly mucking-out of the ol' comments queue -- a chore that we manage to be more diligent about than we are when it comes to changing the water in our betta fish's tank. Sorry about that, Flushy, but the slime is just a lot thicker in the comments queue. This week, we have some fresh steaming nonsense from a couple of Internet warriors who are quite unhappy at the life sentence handed to Florida sociopath Michael Dunn in the first-degree murder of Jordan Davis. According to one "Jim Smithill," Jordan Davis got exactly what he deserved for being a black teenager in a vehicle that was rudely playing loud music -- as we all know, it's the thuggish rear-seat passengers who cause the most trouble:

Those punks should have been the ones exercising some consideration. And the mommy's so angry. Too bad she forgot to teach her punk thug wannabee some manners and respect for others.

It's SO TRUE! Lucia McBath really has some nerve to criticize a brave American with a gun for protecting himself from her unmannerly son by shooting him to death.

Also, we should note that Mr. Jim Smithill believes that only cowardly wusses hide behind noms de blogue:

Hey Dok Zoom. Very courageous to post this blog anonymously. In other words you're a coward.

Egad! Yr. Dok Zoom has been called out! We're not entirely sure why Mr. Smithill thinks our pseudonym is anything sinister, as we've mentioned our name (Marty Kelley*) here previously. Or maybe there's an actual challenge here: Yr Doktor Zoom takes his nym from The Flash's nemesis, Professor Zoom, and we note that Mr. Smithill's email is similarly themed: professor_marvel2001@[redacted], so perhaps he wants to arrange a genuine comic-book-style duel, a supervillian against a fraudulent wizard from Oz? It's on, Mr. Smithill -- when Eric Holder debates Cliven Bundy in Las Vegas, we'll meet you in the same venue for a snark-off. Bring your best Hunter S. Thompson references, big guy.

The same post also brought us a whole bunch of stupid from "GloriaAlred" -- get it?! She's a scummy liberal, but this commenter is a conservative! Haw Haw! -- who also has Thoughts on the killing of a black teenager and on what a cool dude Michael Dunn is. Some of them lack context, since they're replies to other comments, which of course Wonkette doesn't even allow. But they're pretty witty, for certain unhinged rightwing values of "witty":

Stop being racists and calling a convicted murderer a sociopath, you monsters! All he did was shoot an evil one -- a 17-year-old kid -- dead over loud music, fail to call 911, and then drive off and order a pizza, just like anyone else would in similar circumstances.

In addition to fans of a murderous sociopath, we also heard from "BradF333," another genuine Climate Skeptic, in response to our piece on Paul Ryan's assertion that scientists are only pretending to have evidence for global warming. Get your Climate Denier bingo cards out; the free space is marked "it still snows in winter." BradF33 has some Genuine Facts!

I'm sorry to have to disrupt your worldview but Paul Ryan is exactly right and the majority of Americans know he's right. First of all that 97% figure was proven to be bogus a long time ago, but warmists, like creationists, hold on to their religious beliefs and the statements of their prophets long after they are proven wrong. Second, U.S. realists know that weather and climate change are not strongly related, it's the idiotic AGW scientists that try to prove that cold winters are a proof of global warming, of course the AGW fanatics believe this ridiculous ranting. Finally, as any scientist knows, models based on an hypothesis must predict behavior. In this instance, ALL of the models failed miserably. This means the hypothesis is flawed, in other words, climate scientists do not know the processes that drive climate change, which is basically what Paul Ryan said. So far 50 additional hypotheses have been suggested to explain this critical aberration, none have come close including the "warmth is being stored in the ocean's depths", which NASA scientists themselves proved to be wrong (NASA does have some real scientists). All of this writer's ranting and repeating of warmists spin doesn't change the facts.

That's pretty good! Oh, sure, there are multiple surveys showing that 97% of climate scientists agree that human-caused warming is real, but it was totally disproved because there are lots of geologists, medical doctors, and engineers working for oil companies who dispute it, and they are scientists too! Also, did we mention that it still gets cold in the winter?

BradF33 has Moar Insights, of course:

This line of thinking is exactly why we believed the sun revolved around the earth for centuries, all you have to do is look up at it to see this is true. The fact that the earth WAS (this trend stopped 18 years ago) getting warming while we were using fossil fuels proves only a interesting coincidence, not a scientific fact.

Aw, the old "Global Warming Stopped 18 years ago" line! That's so cute! And a wonderful line of bullshit!

And if we have a climate denier, we may as well throw in a creationist! Our recent piece on a nifty video outlining the evidence for evolution in whales made "jvkohl," who is apparently on the Kohl junior varsity team, very unhappy:

Serious scientists continue to debunk the pseudoscientific nonsense of evolutionary theory, and theorists fail to provide experimental evidence of biologically-based cause and effect. http://www.nature.com/news/does-evolutionary-theo...

We kind of loved this one, because jvkohl includes a link to a Nature article that doesn't debunk evolution at all -- it presents a debate between biologists who think the traditional neo-Darwinian model needs a major remodeling to include new evidence, and others who think the new evidence isn't substantial enough to really alter the current model. Neither side in the debate considers evolutionary theory "pseudoscientific nonsense." But thanks for playing, jvkohl! It's cute when creationists notice that scientists argue with each other a lot and then conclude that science is bunk! And by the way, this is also a terrific point in favor of the validity of both evolution and global warming -- scientists just love to make a name for themselves by finding evidence that disproves established thinking, but the evidence has to hold up. That's why you aren't finding any creationists in peer-reviewed journals, Bucky.

We'd also like to take a moment to clear out a few older comments that hardly need any context, because while they're brilliant, they aren't especially specific.

Whew! That was a lot of cleaning! It's nice to have a less-crowded comments queue from time to time; now all we have to do is scrape out some of these up-to-date comments about how Mike Brown got what he deserved. We'll get to those real soon, we promise.

* (but we're not the children's book author/illustrator of the same name -- he lives in New Hampshire; we live in Boise. Yr. Dok Zoom is also a good bit older. We'd hate for him to get any hate e-mails, so please direct any such nonsense to us right here at doktorzoom at-sign wonkette dot com)