Deleted Comments: Why Aren't You Fighting The Devil Instead Of Mocking The Duggars? 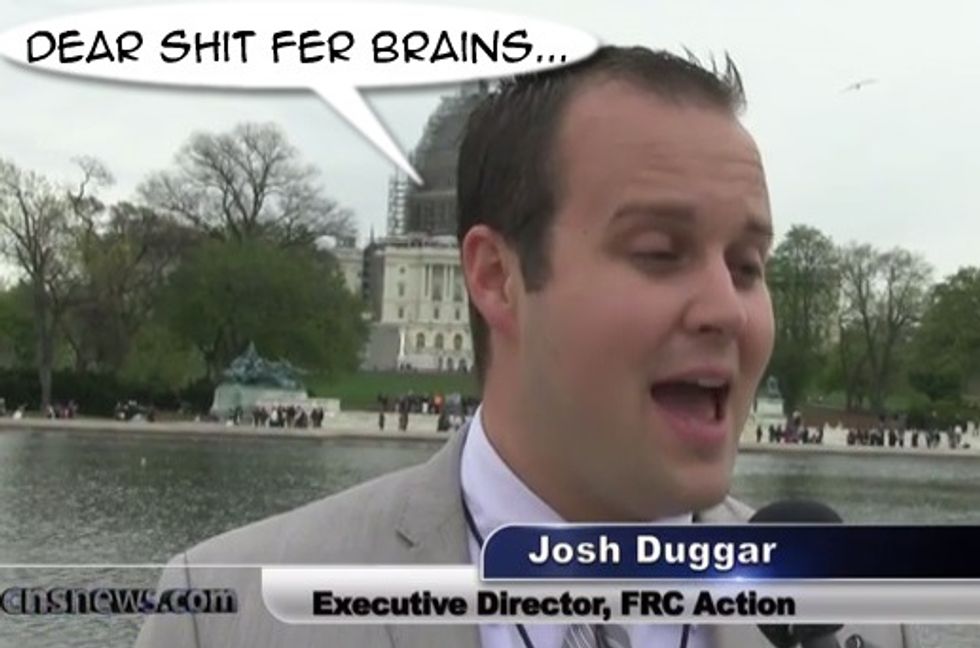 I must object! Josh isn't even IN this one! You morans can't even tell your Duggars apart!

Looks like we must have written words about the Duggars this week, which is always good for some astute contributions from the family's fans. Our story on the comically inept grifting/missionary attempts of Jill Duggar Dillard and her Mandatory Husband, who aren't actually certified as missionaries by their church, brought us some Deleted Comments fodder.

There's "Ruth," who's pretty sure that we only hate the Duggars because we don't care about murder, or something.

I think you just hate this family and the way you say about them is not true they are not as bad as you have said. Can you leave this family alone. They are Christians. How many Christians in USA and how many killings in USA why can all those Christians convert all those killers other than pointing ☞ to the Daggers

It's quite possible that English isn't Ruth's first language, so we'll overlook the syntax and get right to what makes this comment wonderful: that "pointing ☞ at the Daggers" bit. That pointing finger symbol, which we think is simply darling, really does a terrific job of adding emphasis, or at least of making you wonder what Ruth was thinking. Also, too, we're not sure whether Ruth is telling us to leave the Duggars alone, because if we don't, that will somehow interfere with their important work of "converting killers," or if maybe she's imploring us to stop slagging on the Duggars and spend our time converting some killers ourselves. Finally, we must point out that we do not hate the Duggars. We're annoyed by them, but we love them in a way, too, since they're almost as good for pageviews as ☞ Bristol Palin.

We got some more Serious Jesusing from "Nikki," who suspected that the article was sarcastical, but just in case, wanted to clear up an important point of doctrine:

I realize this was prolly a silly sarcastic joke,.... but I do hope you know that God doesn't save people based on "certification" from earthly humans. You hear or read the Word, you believe in your heart, God sends His Spirit to call you to salvation, your choice to accept or deny, confess with your mouth if your accept Christ as your Lord. You do not have to be certified to witness to someone else and tell them about Christ! All us humans are the same, we're all sinners, the only difference with a Christian is they accepted Christ and are saved by grace, that's it. And that invitation is open and free to all.

Thanks for clearing that up, Nikki. Your sermonette probably worked wonders, and while we haven't actually heard from anyone who found the Light by reading it, that's probably because the moment their eyes were opened, they abjured Wonkette and all other ungodly things forever.

We also got a sincerely sincere bit of preachiness from some poor Christian who tried to save us from ourselves, then deleted their account, either in a spirit of quitting this place and shaking its dust from his or her sandals, or because they simply couldn't handle our relentless taunting. So we have no username, just the enigmatic label "Guest," which maybe is fitting, given how the angels walk among us anonymously and all. The problem with us, says the Holy Guest, is we keep looking at the Duggars, and not to The Lord:

This how article shows how consumed you are with their life. It is Jesus that saves not the Duggars, Jesus always has a way of informing people of the real truth in any type of way.

There missions were donations, not funded by a church organization which makes it okay if people volunteered their contributions. If you were actively involved in any ministry you would understand that. This shows your lack of knowledge of the savior and how different types of ministry happens.

Instead of bashing them with your words, get on your knees and pray that they are doing the right thing. Words don't change actions, actions change actions.

Besides this whole "Battle of the Duggars" isnt a battle of flesh and blood it is of the enemy. He will do anything in his power to steer people away from true eternal love, given that the bible has predicted everything that has happened and is happening. We are in the end times and even if I wasn't a believer, Jesus has been proven to be real which would cause me to at least check it out. Regardless, Jesus loves you because are one of his, rely on your own truth seeking and not someone else's. Just because one group doesn't like chocolate triple brownie fudge ice cream doesn't mean you can't like chocolate triple brownie fudge ice cream.

Tell us more about how Jesus is ice cream? As several commenters noted in the comments we don't allow, the fact that the Duggarkinder were funded by donations doesn't "make it okay," seeing as how the alleged "missionary" organization had applied for a tax exemption, which means gallivanting around for TV shows on money that you're supposed to be saving souls with actually is not okay. But we will take under advisement your suggestion that we should be using this blog to battle "the enemy" instead of making fun of the Duggars, just as soon as we see Satan doing anything nearly as ridiculous as they do. Like suggesting that we get on our knees and pray, since actions are far more effective than words. That right there is some sophisticated thinking.

"Guest" also replied to someone who said something about with this epic born-again cliché, plus some interesting elaborations on where you can get to know God:

God is everywhere, you can be on the toilet and talk to God, even if you have not accepted him

Also there is this being called the Devil. He comes to kill,steal and destroy, which is why many peoole refuse to believe .

Instead of despising it [the Bible], read it for yourself then form an opinion.

We have to hand it to God -- we tend to just laugh when people call us up and it's clear they're calling from a restroom. We're also not entirely sure why "Guest" chose that particular example to apply to Yr Wonket. Should we be insulted?

In other Godstuff, we got a couple of long rants from a "Frank Newman" in reply to our month-old piece on the goofy Homeschool Mom who's protesting all the Islamic propaganda in the Tennessee public schools, which her kids don't even attend. We'll spare you the full text, which is mostly devoted to nitpicking, line by line, an image posted by another commenter, and give you a few highlights: For one thing, Christians may look forward to the End Times when Christ returns in triumph, but those nasty Muslims actually ARE trying to end the world by beheading everyone who doesn't bow to Islam. Also, too, everything we dumb liberals know about Christianity is "the result of deficient, revisionist and warped indoctrination by politically correct, leftist teachers and media," but thank goodness Jesus loves us all, even sick liars like Wonkette readers:

The truth is, God loves even you - obviously a nasty, lying hater. of anyone who doesn't buy-into your anti-Christian, moral relativist worldview. And the point you are missing about Christianity is that if we have any true humanity or "morality" in us, then our response to that love (unless we are just too lost to ever believe it could be real) can only be limitless gratitude and reciprocated love for Him. Get it? Oh well, anyways, I hope so. To start, check your ego... that's always where stupidity and lies originate and tend to grow.

In another reply, to someone who mentioned the Crusades, Frank Newman wanted to let us know that there are NO parallels between medieval Christians and today's Islamic extremists, because No True Scotsman would ever kill in the name of Jebus:

You have no idea of the real truth. True Christianity has NEVER been the source or reason for unnecessary or unjust wars and killing. Period. In fact, by definition i.e. based upon the clear teachings and message of Christ such violence could never come from one of His true followers. No, it has always been at the hands of people who either were trying to use the power of the "christian" authority to force others to submit to them or, much more often, it has been people, such as the Muslim extremists of today, who hate Christians. So, clearly, it is YOU who and people like you who have been similarly fooled and led to believe all the lies about the crusades etc., who need to "wake up". Seriously, it doesn't take that much energy nowadays to do some real, in-depth research on the subject of the crusades (or anything else), as long as one has the willingness to sift-through all the politically correct, leftist, revisionist history denigrating and demonizing Christians, in order to get at the real truth.

READ A BOOK! But not just any book -- find one that presents the Crusades in their true light, as a purely defensive fight against Muslim provocations.

And finally, a brief word that's not about Jebus, but worth noting. Our story mocking Rand Paul's brilliant idea to stop school shootings -- window stickers explaining that anyone trying to do murder will get murdered by the school's armed paramilitary faculty -- brought this chiding from a wit calling himself "Ron Paul":

Try everything, even the really stupid ideas! If you really cared about kids, you'd get more guns in the schools, for safety, and at least see how it works out.