Deleted Emails: How's Your Garbage Piece Of Shit Website No One Cares About? :) 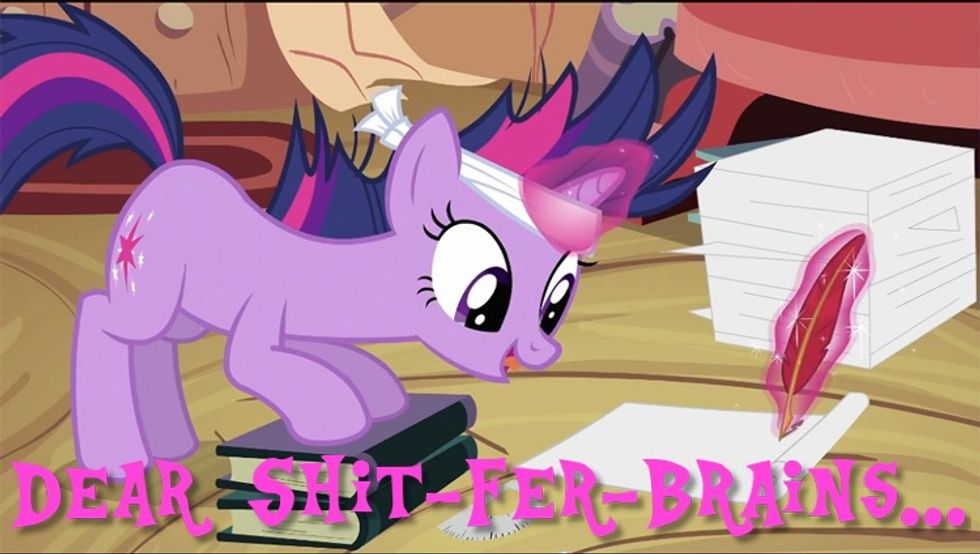 We have some good old-fashioned email for you today, Wonkers. With so much communication shifting to texts and the Twitters, we're simply delighted that "Jacob" took the time to send a sincere, personally-crafted message from his outbox to Yr Editrix's inbox. It's a testament to the disappearing art of the email rant. The heading is the same as today's headline (you don't mess with perfection), and the text reads thusly:

You guys still pretend anyone but your friends and family read your mediocre shit?

The quality of writing is almost equal to that of my high school newspaper. It's so obvious that Dr Cuck is just happy to be there with all the promiscuous young "feminists". (Rebecca sure does look like the typical, miserable Secularist Leftist hag though!:)

Keep fighting the good fight in between cashing those welfare checks Dr. Fat and Rebecca Skankopf! (Thank God Trump is going to make you work for your welfare!)

There's just so much to love about this email, from the smiley at the end of the subject heading, to the boilerplate warning that Donald Trump is going to make us get off our welfare-taking asses and make us work for once in our lives. As everyone knows, one of the first bills Barack Obama signed was the Welfare For Leftish Bloggers Act, which guaranteed that all progressive mommybloggers would be guaranteed a government check, to be supplemented with additional covert grants from George Soros. (Contrary to popular myth, however, the Illuminati provide only a dictatorial party line that we must follow, but no funding, the cheap lousy bastard overlords.) That must be why we're always asking our readers for donations, after finally deciding to stop selling ads, which was just a cover anyway, seeing as how writing isn't work. If there were really a market for jokes about politics, surely SNL would have included a fake newscast since 1975.

She'd have gotten away with it if it weren't for those meddling kids!

And those insults! "Miserable Secularist Leftist hag!" We can attest to this: Rebecca is simply one of the most mirthless, unhappy people in the world. At least until she's had her coffee. Almost as good as a high-school newspaper? That's... original, you bet. Mind you, if high school newspapers are writing like Yr Wonkette now, then high school administrators have really gotten a lot more permissive than we thought they were. (Actually, some of them are pretty awesome).

Ah, but the true genius here is "Dr. Cuck" and "Rebecca Skankopf!" -- we both briefly considered changing our names in homage. Or at least launching a comic book (Netflix adaptation to come later) called "The Adventures of Skankopf and Dr. Cuck," about welfare-dependent bloggers who roam the country in a van, lying about Donald Trump until they're brought to justice by the Pepe Police and made to actually work for a living. Sorry, Evan, Jacob didn't come up with an amusing nickname for you, so you'll be a minor character at most, at least until Jacob notices you. Decision's out of our hands. As for "Dr. Fat," we're not thrilled -- true, Yr Dok Zoom is not svelte, but that one felt like an afterthought.

The line about "Dr. Cuck" merely being here to hang out with all the promiscuous young "feminists," however, is a filthy lie. For one thing, there's not actually a Wonkette office, only a Sekrit Chat Cave, so there's even less there here than in Oakland. For another, I will happily testify under oath that all my virtue-signalling is directed at my employer, because I am here not to win points with all those young feminists, but with Yr Editrix. I'm pretty sure "shameless sycophant" is somewhere in my contract, as is a brief bio of Waylon Smithers.

Ah, but there was more! Rebecca sent Jacob a brief thank-you note saying "lololol -- thanks buddy, needed a pickmeup this morning :)" And she received a reply!

You're welcome buddy. Keep turning in those high school essays like you're a real journalist!

Also, why do you think it is that there are no real female, chess grandmasters? I'm curious to hear the stinky, feminist perspective ;)

Maybe Dr Zoom can chime in with the fat, flabby, self-hating, cuck perspective...

Another masterpiece of the genre! Dumb women don't play chess, so why should they vote? Or something. But hey, I was challenged to weigh in (with quite a bit of weight!) on the question, so I googled it. Best answer appears to be that women just aren't into chess. In fact, a 2006 study found that, at the novice level, boys and girls drop out of pursuing chess at equal rates, and "in locales where at least 50% of the new young players are girls, their initial ratings are not lower than those of boys." The authors conclude there's no innate chess-unworthiness in ladybrains; rather, the relatively small number of women grandmasters simply reflects the smaller number of women who play chess.

God, I am such a cuck. I went and spent a few minutes looking stuff up instead of challenging Jacob to a duel. As everyone knows, research is a fundamentally feminized response to unanswered questions. It's the last refuge of the self-hating.

Rebecca wrote back to "Jacob," citing personal experience (just like a woman would):

I don't know, I'm actually a very poor chess player. Are you a grand master? That's so cool! Nice!

"Jacob's" reply was a genuine surprise:

Now I feel bad. Demonizing each other isn't fun! (After your little Two Minutes Hate for me though, I felt I had to respond from well within the safety of Trump's America, for the glory of the Republic and all the moral, indigenous patriots out there listening to Hannity and Rush every day!:)

That was a pretty quick reversal from the confident trolling tone of the first two messages! We have no idea what "Two Minutes Hate" we incited against Jacob; Rebecca asked, but received no reply, we don't see any "Jacobs" in recent editions of Dear Shitferbrains, and none have been banhammered lately. Or maybe it was all the Orwellian attacks we've unleashed on Donald Trump and other "indigenous patriots" lately, so he felt he needed to defend himself and His People? We suppose, since we had his email address, we could have written to ask "Jacob," but Rebecca's "Which Two Minutes Hate did we do of you, Jacob?" didn't get a reply. Plus, that would be an awful lot like doing "research." Or even "work," which might cause us to lose our welfare.

In any case, we're willing to feel a little more kindly toward "Jacob" for realizing that once he started interacting with the miserable secular leftist hag, he had trouble keeping the vitriol going -- or got bored, maybe? Did he actually start to realize he was talking to people, not a mere cartoon of a leftist? Yr Dok Zoom is a cynical old old cuck, so we're unsure how sincere that "I feel bad. Demonizing each other isn't fun!" actually was -- perhaps that was still more trolling, meant to fool the gullible liberals? Reality is difficult these days. "Jacob," if you're reading, go ahead and drop us a line.

Or not; we're awfully busy undermining America's morality and hating ourselves, you know.

Yr Wonkette is supported by reader contributions; please to throw us money using the "Donate" linky below, because Uncle Sugar just isn't sending us the welfare checks like he used to.