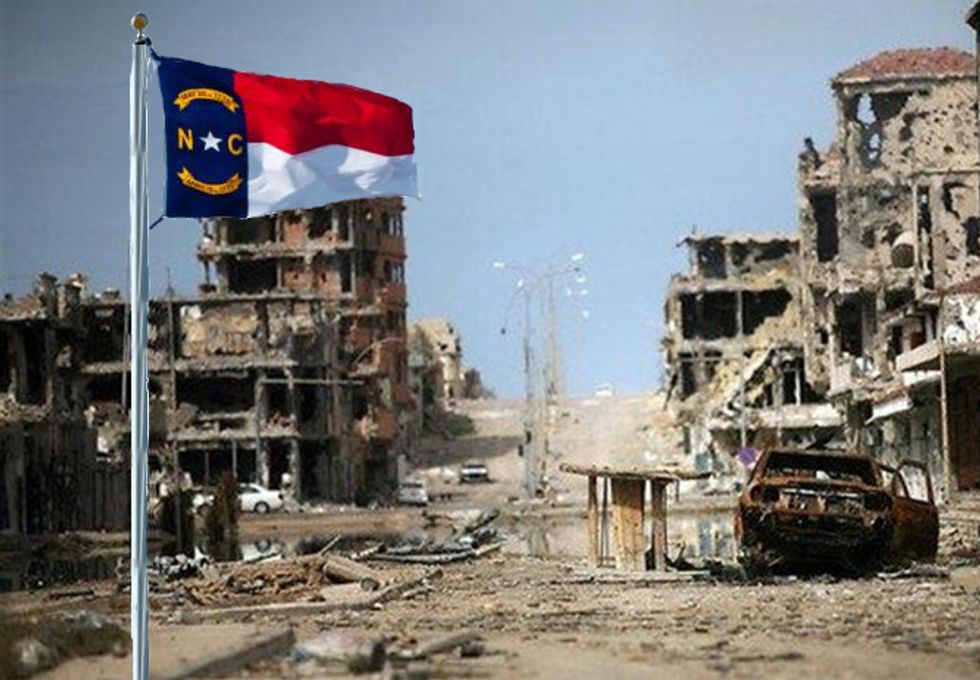 It might be time to send the United Nations, or at least Jimmy Carter and maybe Doctors Without Borders, to North Carolina, seeing as how a group of experts on measuring how well democracy functions in nations around the world has evaluated North Carolina's electoral system and found the state no longer has the essential features of a functioning democracy.

Andrew Reynolds, of the Electoral Integrity Project, briefly explains how he and his colleagues have developed tools that "measured 50 moving parts of an election process and covered everything from the legal framework to the polling day and counting of ballots," and applied them to studies of 213 elections in 153 countries; he says their methodology is "widely agreed to be the most accurate method for evaluating how free and fair and democratic elections are across time and place."

Reynolds says he never would have believed that applying the EIP's methodology to his home state would result in its electoral process receiving a score of 58 out of 100 points, earning it a place

alongside authoritarian states and pseudo-democracies like Cuba, Indonesia and Sierra Leone. If it were a nation state, North Carolina would rank right in the middle of the global league table – a deeply flawed, partly free democracy that is only slightly ahead of the failed democracies that constitute much of the developing world.

Congratulations, North Carolina! Perhaps someday you can hope to score as well on voter registration as, say, Rwanda, which gets a whopping 84 points, or an overall score as good as Tunisia's (74 points -- the best in Africa). As it is, you're just barely ahead of Kenya, Mauritania, Algeria, and Burkina Faso. There's a slogan for your license plates! "North Carolina: Slightly More Democratic Than Burkina Faso."

Oh, but in some aspects of functional democracy, North Carolina actually ranks worse than any country on Earth, which ought to be a matter of pride for the state lege:

Indeed, North Carolina does so poorly on the measures of legal framework and voter registration, that on those indicators we rank alongside Iran and Venezuela. When it comes to the integrity of the voting district boundaries no country has ever received as low a score as the 7/100 North Carolina received. North Carolina is not only the worst state in the USA for unfair districting but the worst entity in the world ever analyzed by the Electoral Integrity Project.

Damn. And most states are satisfied if they're doing better than Mississippi! At least the Justice Department told North Carolina to get its redistricting act together.

Chief among North Carolina's problems with representative democracy is that while Republicans win a little over half the statewide votes, that translates into nearly 100% of the legislative power:

The GOP has a huge legislative majority giving it absolute veto-proof control with that tiny advantage in the popular vote. The other party wins just a handful of votes less and 0 percent of the legislative power.

North Carolina doesn't do democracy very good. At least not if it lets Democrats win.

And then there's Amendment 2, the transgender potty law, which remains in effect after this week's legislative bait-and-switch special session. That, plus the suppression of African American and Latino voting rights, wins you another low score for democratic autonomy.

When, in response to losing the governorship, one party uses its legislative dominance to take away significant executive power, it is a direct attack upon the separation of powers that defines American democracy. When a wounded legislative leadership, and a lame-duck executive, force through draconian changes with no time for robust review and debate it leaves Carolina no better than the authoritarian regimes we look down upon.

So, how to fix it? Start with the simplest of democratic principles: Admit that one party can't have all the power all the time. If it's bad for Zimbabwe or China, it's bad for North Carolina, too. Take the drawing of legislative districts away from the single-party-dominated state legislature and give it to an independent commission (even a conservative bastion like Arizona can handle that!) And respect the will of the voters, for godssake. If you lose an election, you don't get to rewrite all the rules so the new guys have to ask the old guys "Mother may I" before appointing a cabinet.

Keep working on democracy, North Carolina! Before you know it, you'll be right up there in the 60 to 70 range with Cameroon, Sierra Leone, and Namibia!