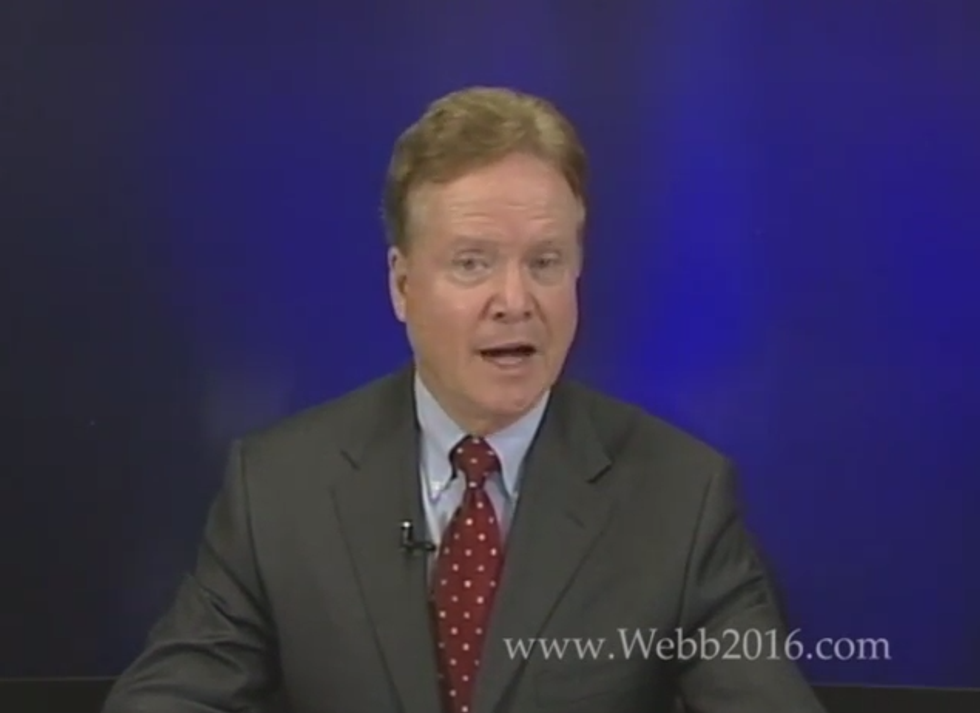 Oh, hey there, Jim Webb, what've you been up to since you stopped being a "Democratic" senator from Virginia? Been writing some books? Been private sectoring, for America and freedom? Been reconsidering whether ladies can serve in the military after all?

Ah, looks like you've been writing a letter to 'Merica and making a home movie to express your rather grand delusions of grandeur about maybe being the next -- hahahahahahahahahaha (sorry, hard to get through this with a straight face) -- president of the United States. Of America!

All righty, Jim Webb, go ahead and make your opening pitch. We'll listen (for the first few minutes anyway).

I’d like to take a few minutes of your time to ask you to consider the most important question facing America today: Is it possible that our next President could actually lay out a vision for the country, and create an environment where leaders from both parties and from all philosophies would feel compelled to work together for the good of the country, despite all of the money and political pressure that now demands they disagree?

As one who spent four years in the Reagan Administration but who served in the Senate as a Democrat, I believe it is possible.

It's a little early in the morning for the Reagan drinking game, but damnit, now we really need a drink to catch up with Jim Webb, who is obviously drunk and confused and thinks he's applying for a job at No Labels, where saying "Reagan" and "Democrat" in the same sentence gets you bonus points because it means you are fluent in the language of "both sides do it" and have sworn an oath to uphold that most sacred of American values (after Jesus and bombing all the countries, obviously): bipartisanship.

You know bipartisanship is really important to the average American who dines regularly at the Applebee's salad bar, because whenever they are polled on the issues most important to them, they always say, every single time, "bipartisanship." Sure, let the Washington D.C. insiders care about the economy or national security, but in the heartland, what your average Joe The Plumber talks about with the kids and the missus at the farmhouse table is how it sure would be neat if Republicans and Democrats could work together in a friendly way to accomplish nothing at all whatsoever, but cooperatively.

For those folks, Jim Webb just might be their man. At least he seems to think so.

Over the past few months thousands of concerned Americans from across the political spectrum have urged me to run for President.

In that spirit I have decided to launch an Exploratory Committee to examine whether I should run for President in 2016. I made this decision after reflecting on numerous political commentaries and listening to many knowledgeable people. I look forward to listening and talking with more people in the coming months as I decide whether or not to run.

We shudder to imagine the political commentaries he reflected on. Maybe some Peggy Noonan. Maybe some David Brooks. Maybe he's watched a lot of Sunday morning talk shows. That's how he learned that "a strong majority of Americans agree that we are at a serious crossroads."

With enough financial support to conduct a first-class campaign, I have no doubt that we can put these issues squarely before the American people and gain their support. The 2016 election is two years away, but serious campaigning will begin very soon. The first primaries are about a year away. Your early support will be crucial as I evaluate whether we might overcome what many commentators see as nearly impossible odds.

The stock market has nearly tripled during this so-called “recovery,” while ordinary income and loans to small business owners have actually decreased. I believe we can address these concerns while still supporting the American Dream of economic success for the risk-takers and visionaries who are at the forefront of the future. I’ve spent most of my professional life as a sole proprietor. I’ve lived under the load. We don’t need to overburden our economy with more government intrusion and additional piles of paperwork. We might begin by requiring an examination of all of the paperwork programs in our government.

Okay, enough, go ahead and close the deal, Jim:

Time is indeed of the essence. As I consider this effort I am asking that you support the exploratory committee with a donation and that you encourage other like minded Americans to do the same.

Yup, sure, we'll get right on that. You sure have made a convincing argument that you would be the best Ronald Reagan since Ronald Reagan, but who is maybe a Democrat? It's not clear. But as we all know, when it comes to electing a president, no one gives a damn about political parties. So it really doesn't matter whether Jim wants to be a Reagan-style president or a one-time-I-was-a-Democrat-style president. The point is, bipartisanship and also he needs money, please give money.

Yeah, we'll be sure to share that with all of our like-minded friends. If we can find any.