Senator Mocks Crazies With 'Each Sperm Is Sacred' Amendment 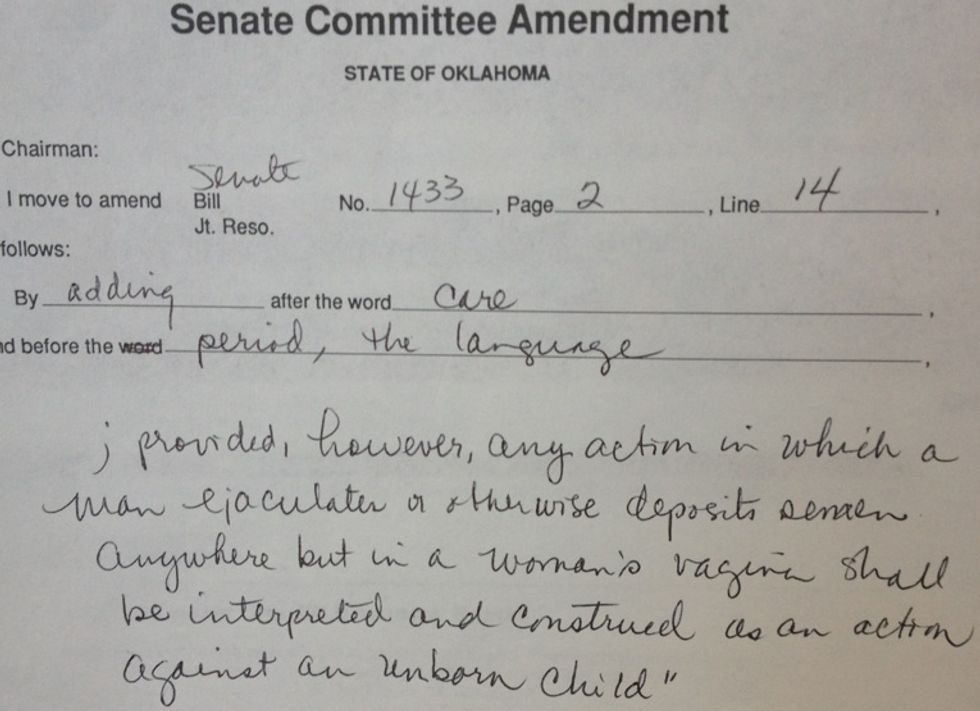 To make a point, which is a thing that congresspersons occasionally do, Democrat Constance Johnson, State Senator from Oklahoma, proposed an amendment to the state's personhood bill this week that would render punishable by law ANY sperm that does not enter into a competition with its squiggly brethren to make a baby! The personhood bill, spearheaded by some Republican freaks, is intended to define life as beginning at conception, i.e. a zygote should have all the rights of an actual born human, like being allowed to get married to a person of the same sex in the state of California, ahahhaa. Senate Bill 1433 states that an unborn child "at every stage of development [has] all the rights, privileges, and immunities available to other persons, citizens, and residents of this state." Johnson's amendment, intended to highlight the insanity of this, essentially states that Each Sperm Must Find Its Egg. Amazing.

However, any action in which a man ejaculates or otherwise deposits semen anywhere but in a woman's vagina shall be interpreted and construed as an action against an unborn child.

The thing is this is probably something that Rick Santorum believes to be true, thanks for giving him this great idea.

Johnson has since retracted her amendment, satisfied that she made her point that 1433 is odious.

The personhood bill, which unfortunately is still real, has some other weird clauses, including one which seems to suggest that if a woman "accidentally" drinks herself to death or something while pregnant, that's OK, which, why even go to this place of your imaginations, "law"makers?

Nothing in this section shall be interpreted as creating a cause of action against a woman for indirectly harming her unborn child by failing to properly care for herself or by failing to follow any particular program of prenatal care.

In other strangely related Sperm News, the striking down of Prop 8 in California on Tuesday prompted Rep. Louie Gohmert, a Republican from Texas, to say on the House floor that he is DEEPLY OFFENDED that some people/judges think that sperm doesn't always have to be joined with an egg in perfect harmony. Said Gohmert:

The court, as I understand it today, struck down a law that said marriage is between a man and a woman. It's interesting that there are some courts in America where the judges have become so wise in their own eyes that they know better than nature or nature's God. Nature seemed to like the idea of an egg and a sperm coming together because of pro-creation. Apparently [the judges] thought the sperm had far better use some other way biologically, combining it with something else. But the voters of Iowa came back and said you know what, if you're not smart enough to figure out actual plumbing...then perhaps we need new judges, and that's what they did.