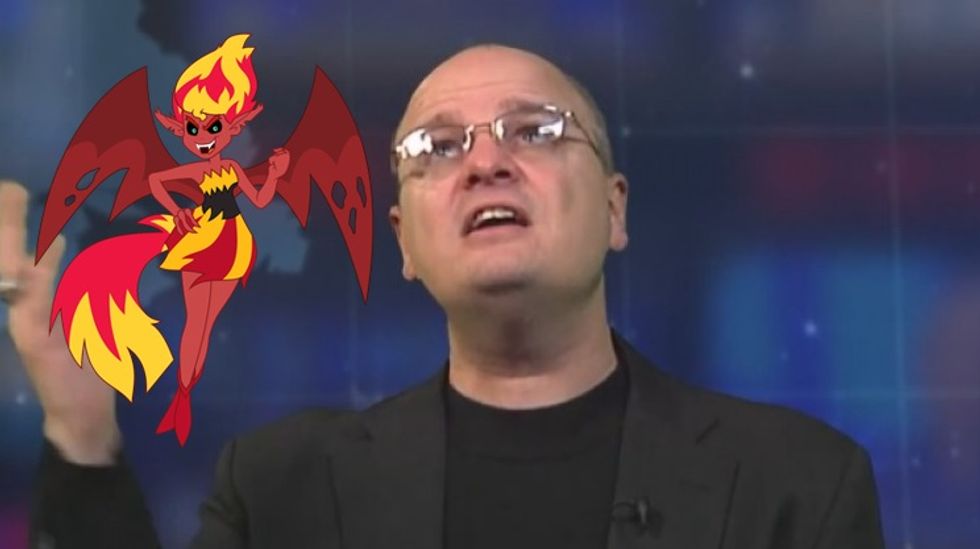 Whatever. This is just a minor setback

Spirits of sin and evil must have infested Colorado Tuesday, since that's the only possible explanation for the surprising Republican primary loss by Wonkette frenemy Gordon Klingenschmitt, whose brief career as a member of the state legislature is now over after a single term in the House -- where perhaps he should have stayed instead of running for the state Senate. No matter what the issue was, you could count on Klingenschmitt to be on the absolute wrong side of it. He's the sort of guy who could probably find a reason to oppose fixing potholes because asphalt is brewed in the demonfires of Hell.

And so, a fond farewell to "Dr. Chaps" -- a nickname he was fond of because he used to be a Navy Chaplain, not because he favors leather fetish gear ... or so he'd have us believe. He's certainly not leaving the Internet/Radio Preacher business anytime soon, so we can't really expect an actual goodbye, but at least he won't be filling the Colorado Statehouse with the stench of sanctimony and asparagus pee.

Just in case you'd somehow missed this paragon of moral scolding and pure stupid, let's remind you of some of Gordon's Greatest KlingenHitts:

Klingenschmitt first became a Little Big Deal in religious Right circlejerks for his brave opposition to oppression of Christians, for which he was quite literally martyred, except without the dying for his faith part. But he definitely suffered for his faith, or at least for his pigheaded decisions related to it, which are exactly the same thing. Back in 2006, way back before Barack Obama destroyed America, Klingenschmitt was drummed out of the Navy for his righteous refusal to obey Godless Pentagon orders that (he claimed) prohibited chaplains from "praying in Jesus' name." Except that's not what happened at all. It's true that the Pentagon directs chaplains to limit themselves to nonsectarian prayers at "command functions" where all personnel are required to attend, but there was never a prohibition on mentioning Jesus in religious services, and Klingenschmitt was never disciplined for praying to Jesus even at command functions. What did get Klingenschmitt kicked out of the Navy was his decision to wear his Navy uniform to a March 2006 White House demonstration against the Pentagon policy, at which he spoke and prayed, in defiance of a longstanding military policy against service members participating in political events while in uniform. That got him court-martialed. So yes, his entire career as a Genuine Victim of Christian Persecution is based on a lie.

Once he started running the rightwing Christianist gravy train, Klingenschmitt quickly got a reputation for reliably loony pronouncements about faith, especially about The Gays and Demons. Demons everywhere:

When he was elected to the Colorado House of Representatives in 2014, Klingenschmitt was less than successful at driving all the demons out of the state. Klingenschmitt continued his internet/radio show, creatively titled "Pray in Jesus' Name," for the one thing he became famous for, factually incorrect or not. But suddenly, since he was actually in government, people who never paid attention to his bloviations started hearing about this wacky preacher/legislator who said terrible things on the radio. Like in early March 2015, when Klingenschmitt reacted to the horrible murders of three Muslim students in Chapel Hill, North Carolina, by proclaiming it proved how persecuted Christians are. And then, just a few weeks into his freshman term in the House, Klingenshmitt Godsplained that a horrific attack on a pregnant Colorado woman happened because God was punishing America for allowing abortion. (Awful details follow, skip down a few lines if you want.)

A pregnant woman in Longmont, Colorado, was attacked by a complete stranger who cut the fetus, 7 months along, out of her womb and left the woman to die, in an attempt to steal the baby. The fetus died as well, and the assailant was arrested when she took it to an emergency room, claiming she'd delivered it prematurely. Klingenschmitt explained this is exactly what happens when nations allow legal abortion:

This is the curse of God upon America for our sin of not protecting innocent children in the womb and part of that curse for our rebellion against God as a nation is that our pregnant women are ripped open.

CO Rep. Klingenschmitt Booted By Fellow Republicans For Being A Jerk

That was pretty thoughtful of God to allow a pregnant woman to suffer for the whole nation's sins. Mysterious ways and all. The victim survived, and when Klingenschmitt tried to donate $1000 to a GoFundMe campaign that had been set up to help her, she told the pastor/state representative to go stuff it up his God-hole. The House Republican leadership didn't appreciate having an unhinged guy hurting the body's reputation either, so it booted Klingenschmitt from a couple of committee assignments -- leading Dr. Chaps to whine that he was being persecuted by the government for his private thoughts of faith, which were privately broadcast all over the interwebs.

After that embarrassment, Klingenschmitt agreed to only do his radio show when the Legislature wasn't in session, which still left him plenty of time to say crazy Jesus shit. He fretted that the government was fixing to send gay people to do butt stuff right in front of you on your own couch, and got some much-deserved national attention when he told Jessica Williams of "The Daily Show" all about why God gets a sadface when transgender people poop in the wrong toilet:

Gordon Klingenschmitt, elected official, has some lunatics for you. Enjoy!

And just at the start of June, Dr. Chaps met an interracial couple who think gay couples are gross and should be banned, so all liberals must stop comparing marriage equality to Loving v. Virginia, because here are a black woman and white man who know there's nothing similar to their marriage and filthy sodomites' marriages, not at all. No, not even the parts involving doing laundry and fixing the roof.

And now, bereft of the opportunity to make any laws, Dr. Chaps has to go back to the only thing he's good at, saying stupid shit that the rest of us make fun of him for. We have a feeling he'll get by. Despite his best efforts to pray them away, The Gays insist on hanging around, Colorado just chose a nice transgender candidate for Senate, and the nation stubbornly refuses to be a theocracy, so we'll still have Gordon Klingenschmitt to kick around. Metaphorically.