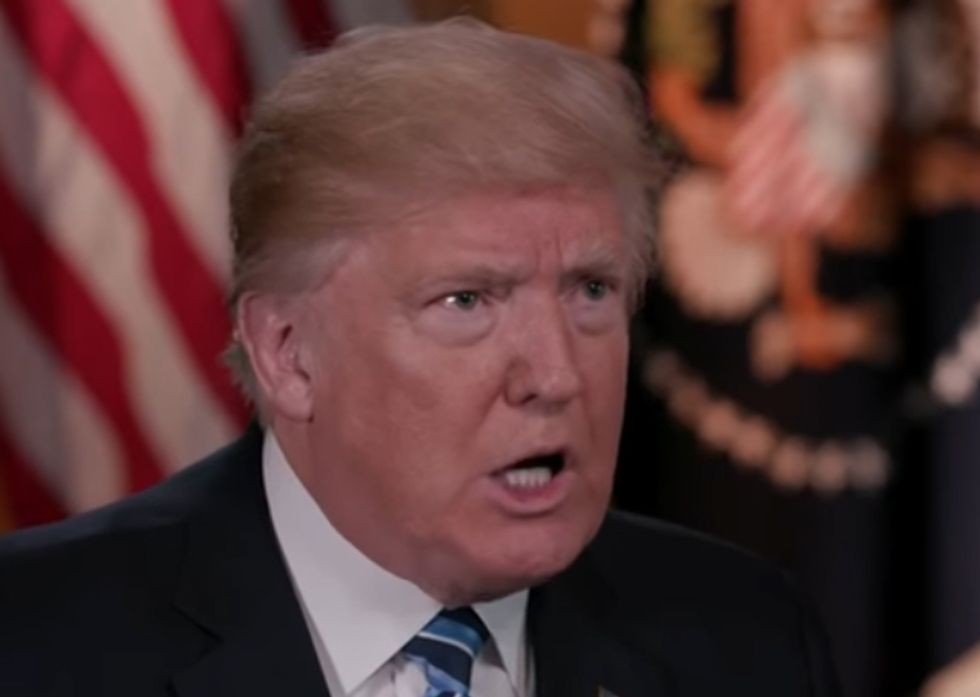 HAS YOU SEEN IT?

Red Alert, America, because your president is even fucking crazier than he was yesterday, and on top of that, he's somehow managing to get dumber and more racist.

No, we're not talking about how he just accused MSNBC's Joe Scarborough of murder on Twitter, but that's a thing!

No, we're not talking about how Trump's response to learning that NBC's Matt Lauer is some sort of sex perv, JUST LIKE HE IS, is that news executives and anchors should be fired for reporting the actual news, but that's also a thing!

Maggie Haberman has a scoop in the New York Times that builds off the recent revelation that Donald Trump thinks Donald Trump was lying when Donald Trump admitted Donald Trump likes to grab women by the pussy. (Haberman has a new detail about that, by the way, and it is that the president doesn't recognize the sound of his own voice. Ayup.) The new thing? Oh, it's just that Trump is searching the White House couch cushions and the corridors and the nooks and the crannies, still looking for proof that Barack Obama (a real president) was born in Not America. What's that thing in Melania's armpit? It's Donald Trump's honker, sniffing around to see if Obama's long-form birth certificate is hidden up in there!

In recent months, [advisers] say, Mr. Trump has used closed-door conversations to question the authenticity of President Barack Obama’s birth certificate. He has also repeatedly claimed that he lost the popular vote last year because of widespread voter fraud, according to advisers and lawmakers.

One senator who listened as the president revived his doubts about Mr. Obama’s birth certificate chuckled on Tuesday as he recalled the conversation. The president, he said, has had a hard time letting go of his claim that Mr. Obama was not born in the United States. The senator asked not to be named to discuss private conversations.

That's right, anonymous Republican (we assume) senator, chuckle away! The president may be verifiably insane, as he clings to his racist, baseless belief that the black guy who actually earned the office in which his decaying ass now squats might not be a real American. Ha ha! What a knee-slapper! Whichever Republican (we assume) senator whispered that in Maggie Haberman's ear is invited to go fuck himself.

The Washington Post serves up its own casserole of Trump batshit, reporting that Trump is adorably telling everybody he's ever met he's DEFINITELY FOR SURE CERTAIN Robert Mueller's investigation will be over by the end of the year, and that he will be declared innocent of all charges. While it's cute if he really believes that (his lawyer Ty Cobb has been insisting to him that it's true), it's also disturbing, because what happens when January 1 passes and Mueller doesn't show up in the Oval to give Trump a lick-job and a framed plaque that says, "NO RUSSIA, NO RUSSIA, YOU ARE THE RUSSIA"?

One outside adviser to Trump warned that the president would “blow a gasket” if there was no statement of exoneration by year’s end.

We laugh at these things, because for Christ's sake, otherwise, we'd spend all our time weeping for the state of America (and TERRIFIED, since we're closer to war with North Korea than we've been in years, to the point that Hawaii is bringing back its Cold War air raid sirens). But laughing aside, Jonathan Chait points out at New York mag the thing we all know and suspect, which is that it's highly possible Trump believes his lies, which would suggest the president's Very Good Brain is irreparably broken:

If Trump actually has the ability to convince himself of his own lies, it would suggest a possibility far more dangerous than even his critics have previously assumed. He might be in the grip of a mental-health issue, or at least one more serious than mere sociopathy. And the mutterings that he might need to be removed from office through the 25th Amendment could grow more serious than many of us have expected.

Mike Pence, you know what to do. Just fucking do it, you white-haired bigoted Ken doll from hell!

Wonkette salaries and servers are fully paid for by YOU. If you love us, click here to fund us!