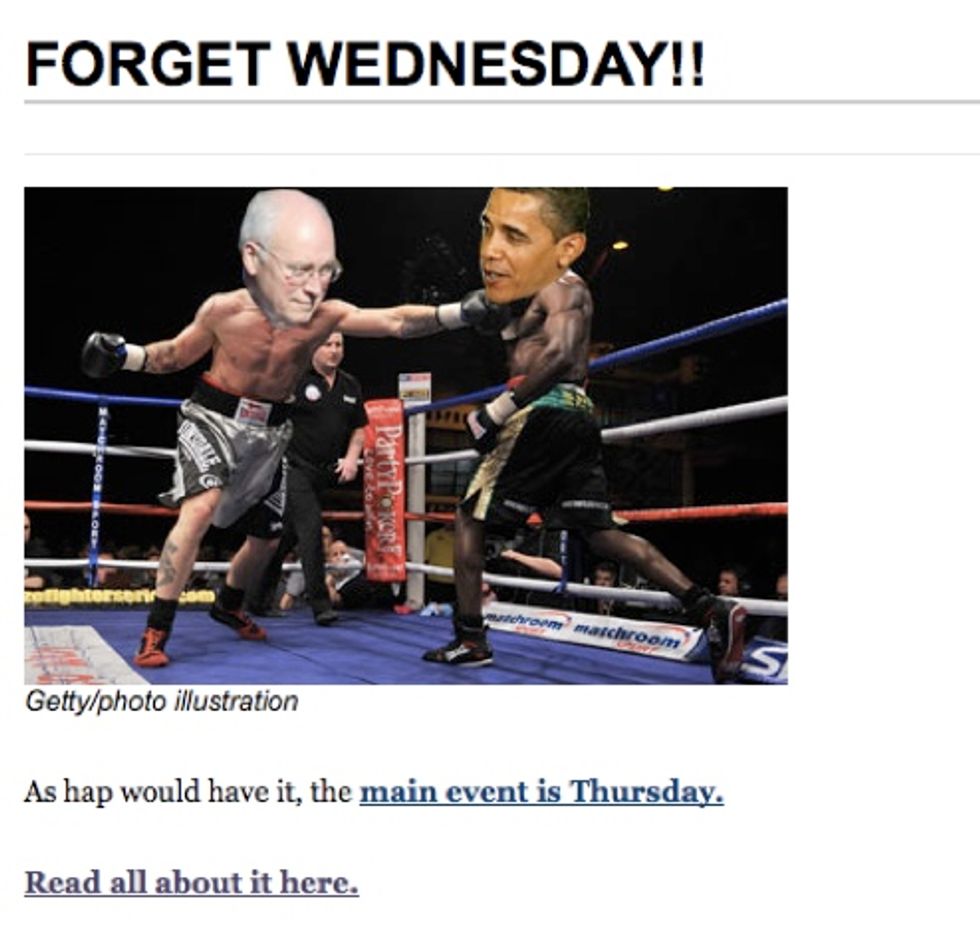 Often is the question asked:Are Dick Cheney crazy, stupid, or lying? Even if you don't limit yourself to choosing just one, it's tougher to answer this question about Cheney than it is with many of his peers. Consider this quote, typed out by POLITICO from Cheney's recent appearance on Hugh Hewitt's radio show "I Am Always Angry And It's All Your Fault":

“I think the Benghazi thing is one of the great — it’s not just an embarrassment, it’s a tragedy, because we lost four people that night. And what I always recall is her testimony saying, ‘What difference does it make?’ And the fact of the matter is it makes a huge difference.”

FOUR PEOPLE! Dick Cheney is so, so hurt that Obama and Hillary won't take responsibility for these FOUR PEOPLE who died horribly serving their country (even though Hillary did take responsibility by literally saying the words "I am responsible"). ...FOUR PEOPLE! Go and seek medical attention for the rage-stroke (ew) you just had, then ask yourself: What in the hell is this man trying to accomplish?

The most straightforward explanation is that he thinks he's doing the GOP a favor by "hitting" the Democrats. But nobody listens to or even likes Dick Cheney except people who are thoroughly terrible and bad at critical thinking and are therefore already solid Republicans. Anyone on the fence about King Obama The Worst is statistically more likely to think "Well if that dick Cheney hates him he can't be all bad," rather than "Yeah, Darth is right!" So: Crazy, stupid, or lying?

Cheney said while he was glad bin Laden was captured, the administration missed out on key opportunities because it wanted to declare victory too quickly and hasn’t acknowledged the 10-year intelligence gathering that made it possible.

“By going public the way they did, they lost, I am convinced, some opportunities,” Cheney said. “You don’t go out and broadcast the fact that you’ve got the guy. You want to take that intelligence and be able to exploit it over the next few nights, and wrap up large parts of the network. … They were in such a hurry to go out … and announce victory, that I’m convinced that they probably did not get maximum damage out of the intel that they had captured.”

This is why we are going with "deluded;" it's quite clear that Cheney feels in his "heart" that, no matter how much the Obama administration accomplishes in foreign affairs, a third and fourth term of Bush-Cheney would have done better. It's the apotheosis of "Psh, I could do that" syndrome. We imagine that, deep down inside, Cheney feels a strange feeling -- you or I would recognize it as self-doubt, maybe even remorse -- but he's not emotionally equipped to deal with it, so it passes through a catalyst of pride and anger and belligerence, and comes out as this pathetic drip-drip of hateful nonsense. (Also maybe a little bit of "stupid" because, Bin Laden? The man whose administration couldn't find Bin Laden on a map marked "A MAP OF WHERE BIN LADEN IS AT ALL TIMES" is reminding people about Bin Laden as a way of somehow hurting Obama, whose signature foreign policy success was... killing Bin Laden?)

“I think the incompetence of this administration in the way they’ve handled these kinds of affairs, especially in the Middle East, is one of the worst aspects of this presidency [...] If you’re a friend and ally of the United States in that part of the world tonight, you’d have to say what’s this guy all about? Can we count on anything he’s told us? … At the same time, our adversaries out there no longer fear us.”

This could be Barack Obama in 2008, correctly noting that the Bush administration's foreign policy, intricately shaped by Dick Cheney, was premised on lies, long on unfounded self-confidence and short on everything else. But no, it's Dick Cheney in 2013. When will this man Cheney off and go Cheney himself? We will gladly trade the occasional writes-itself post for Dick Cheney going away forever. He can leave his new heart, though. It might be useful to someone who isn't already dead inside.