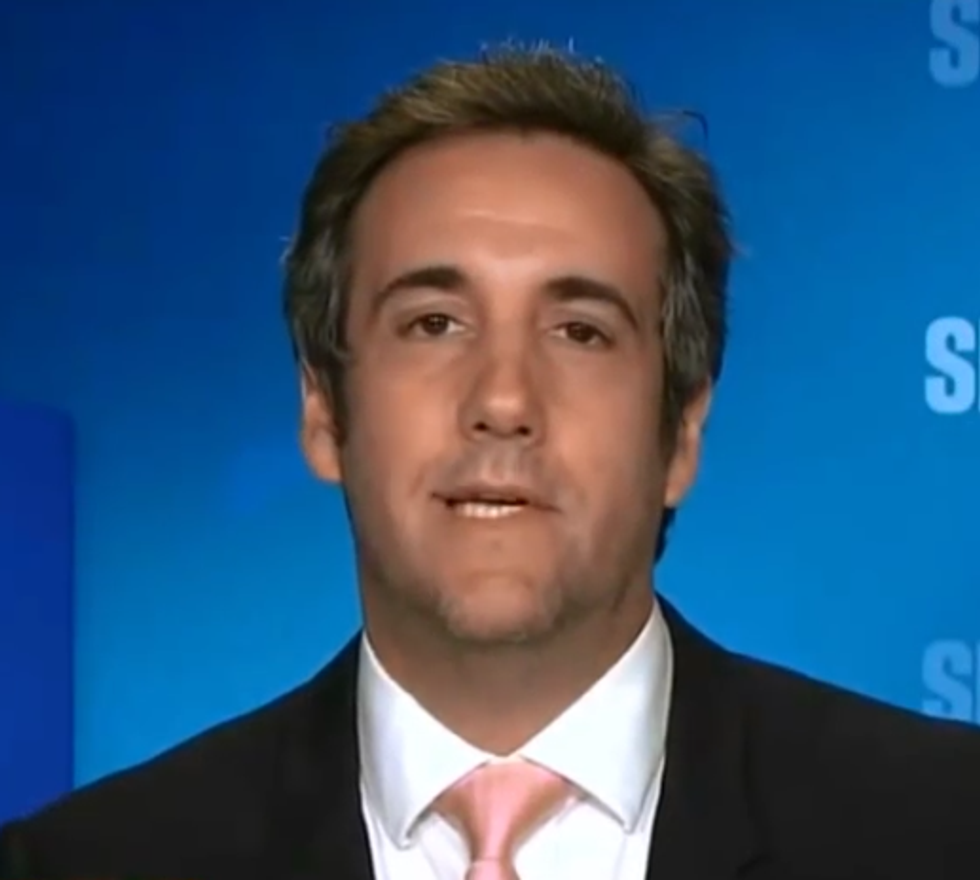 sexxxxy, if "gross" is your thing

You know the sniveling dickwhistle pictured above. He is the guy who opens his weird mouth and protests "SAYS WHO?" all the time, who serves Crown Prince Pussgrab of the Mar-a-Lago Pussgrabs, as his personal lawyer. His name is Michael Cohen, and he likes to put on the big mobster lawyer attitude, because what the Trump regime lacks in brains, it tries to make up for in weak-man's-idea-of-a-strong-man machismo. ANYWAY, he is a dick. He has weirdo connections over in the "Russia slash Ukraine" part of the world, just like seemingly everyone Trump has ever met, and he either hand-delivered a peace plan from his pro-Russian pal in Ukraine to disgraced former National Security Adviser Michael Flynn, or he sent it to Flynn in a candy-gram, or he did none of these things, depending on which source you believe. (All the sources were "Michael Cohen," talking to different newspapers.)

[wonkbar]<a href="http://www.wonkette.com/614250/ok-everyone-its-time-to-chill-out-about-rachel-maddow-right-now-jesus-christ"></a>[/wonkbar]And once again, he is a dick. Specifically, for the day of March 15, 2017, he has chosen to be a dick to Joe Brzezinski-Scarborough, who does the "Morning Joe" program, and who agrees with many people who think it was Donald J. Trump himself, or somebody in his organization, who orchestrated the leak of two pages of Trump's 2005 form 1040 tax return to journalist David Cay Johnston, after which it ended up on Rachel Maddow.

UH OH! Here comes Michael Cohen to defend his daddy Trump, with a huff and a puff and a GRRR ARGH:

How does "I know who has his taxes" in any way refute the idea that Trump or somebody in his White House may have leaked them? Meh, whatever, argle bargle, who gives a fuck.

J-Scar additionally ain't give a fuck about Cohen's "Angry Weenus" song and dance, and responds to it with a resounding "SAYS WHO?":

And finally, he ain't give a fuck, because literally half of Twitter came to the same conclusion last night, because we KNOW Donald Trump and his band of merry sycophantic creeps aren't competent enough to organize anything as well as their immediate response to last night's Rachel Maddow program (not that their response was "good," but it's a mighty low bar). Scarborough also has a final dig about the nugget of poo Trump smeared on Twitter, about Obama doing a "wire tapp" on him:

[wonkbar]<a href="http://www.wonkette.com/613914/joe-and-mika-officially-dumping-donald-trump-like-the-filth-he-is"></a>[/wonkbar]DAYUM, he is done with Trump's shit. We reminded you earlier that both Joe and Mika seem to have been evolving as of late regarding the Trump regime. It's like all the things liberals and decent Republicans have been saying about the autocratic shitweasel in the White House are true!

This is a far cry from back in the olden timey days, when Joe and Mika were acting as informal "advisers" to Trump, visiting him at Mar-a-Lago and shit. Gosh, they could have even been there at the same time as Cohen was! Joe 'n' Michael could have crossed streams in the boy's room, not that they'd ever do such a thing! SAYS WHO?

Anyway, we continue to congratulate the "Morning Joe" team on their slow promenade into Reality Land, and we vow to keep encouraging them as much as they need.

They have held Wonkette's baby after all, so we are basically related.

Wonkette is supported entirely by Readers Like You! Support us with money by clicking the happy banner below!