Did A Transgender Try To Watch Pat Robertson Poop? 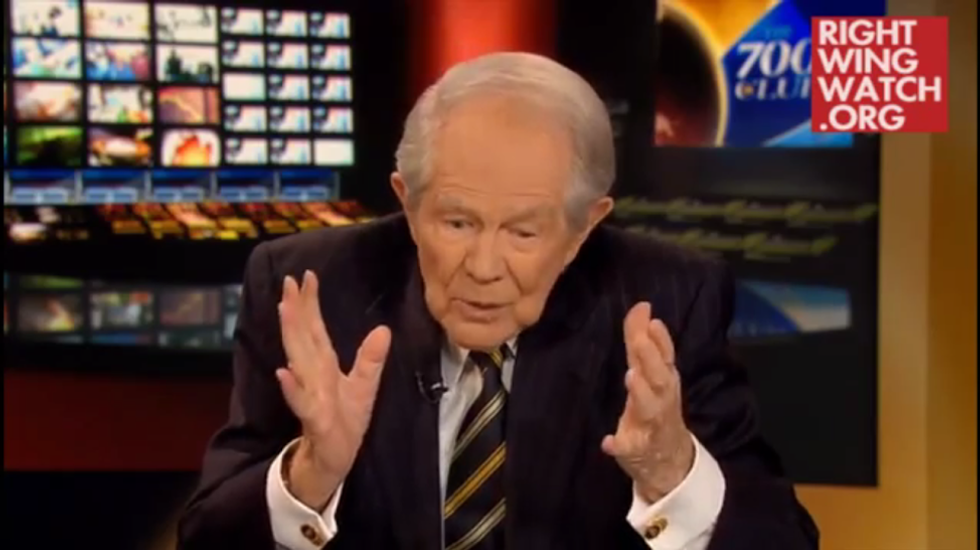 We are very serious with the journalism question we are asking here. Pat Robertson told his "viewers" on The 700 Club that "so much" of the time, transgender people are big fakers who just want to sneak into the wrong bathrooms so they can see everybody nakey, even though most people do not get nakey in public restrooms. They DO poop though.

Check out this statement, then we have a bone to pick with Pat Robertson:

I think it's just perfectly reasonable to say look, we don't want men going into women's bathrooms. We don't want predators going out where little girls are. We don't want voyeurs having free access to the women's locker rooms during games when they're changing clothes. [...]

I said on this program several years ago that if somebody, honest to goodness, feels that she is a woman trapped in a man's body, then she has a perfect right to take hormones and have surgery and change to what she really feels, and think somewhere along the way there was a biological mistake. But people like that are relatively rare. So much of this other stuff is put up, it’s put on and it’s just a fraud. And it’s one more opportunity for the left to demonstrate against some aggrievement they claim to have that doesn’t exist.

[wonkbar]<a href="http://wonkette.com/524076/gayphobic-hatemonger-pat-robertson-shockingly-cool-with-the-sex-changes"></a>[/wonkbar]What the fuck is Pat Robertson talking about? He did indeedsay on his show that transgender people are very real and that sex changes are A-OK with him if a person for real feels like they were born in the wrong body. And, uh, that is what this whole story is about. Like, the WHOLE FUCKING CONTROVERSY is about people like that.

Perhaps Pat is under the impression that there is a marauding horde of fake transgenders out there, who are suddenly pretending to be a different gender because it's the cool thing the Kids These Days are doing, like Snapchat.

Or maybe he has some secret Grandpa Pat magic knowledge where he can tell whether a trans person is real and legitimately a "woman trapped in a man's body," or if it's a pervy trickster who just wants to watch ladies poop.

Or alternately, maybe he's had the harrowing experience of a real live lady following him in to the bathroom with her finger over her mouth like this ...

...so they can try to see what Pat's face looks like when he's pinching loaves. DID THE FAKE-GENDERS DO THAT TO YOU, PAT?

OK in all seriousness, the point is that Pat is correct on one point. Transgender people are not all that common! They are a very tiny minority, and laws like North Carolina HB 2 discriminate against them directly. As in, the people being hurt by these laws are the people who legit know they were born in the wrong body and are taking whatever steps they choose to live in accordance with their gender identities, INCLUDING doing number one's and number two's in the bathroom that feels more comfortable.

These laws have jackshit to do with men in the ladies' room, predators going after little girls, or voyeurs in lady locker rooms during WNBA games or whatever else Pat Robertson is afeared of. HOW MANY TIMES MUST WE SAY IT OMG?

Unless Pat knows something we don't know. Please tell us your secrets, Pat Robertson, we promise not to tell anybody!