Did Donald Trump Ask If It Was Wrong To Be Sexually Attracted To His Daughter Ivanka When She Was 13? Asking For A Friend. 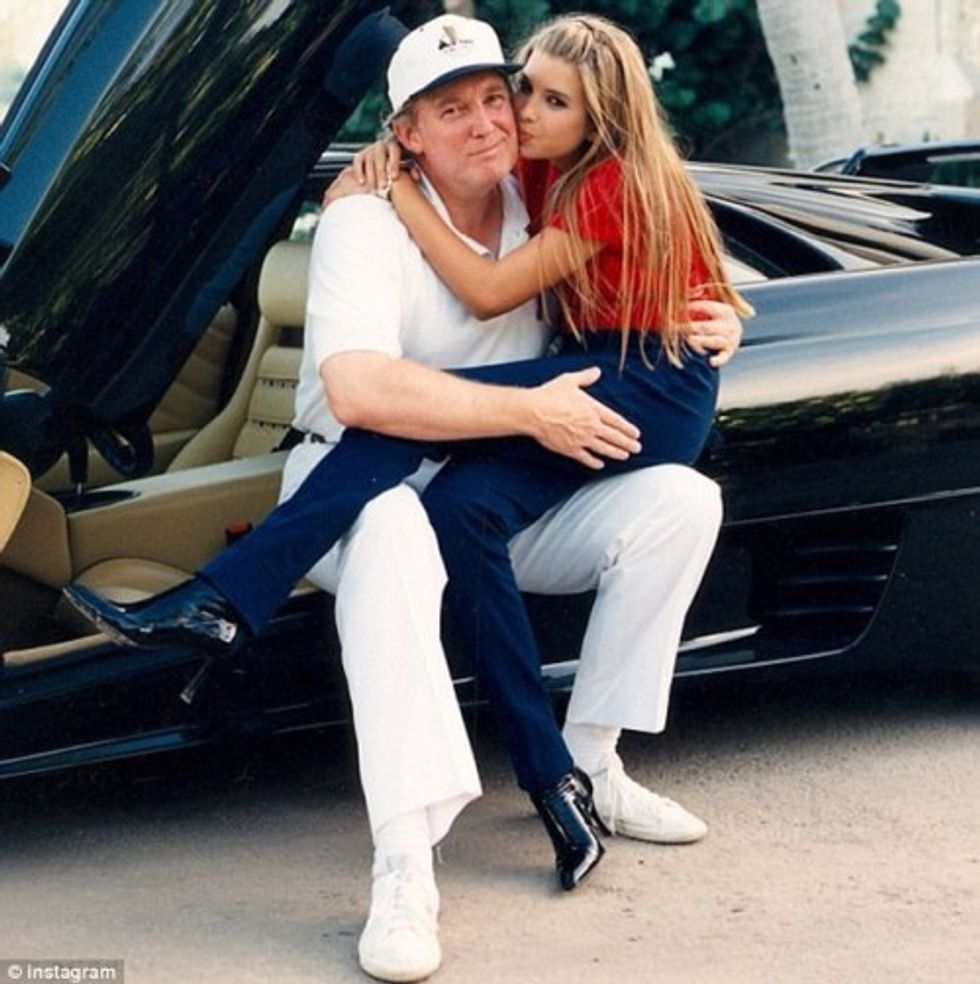 How could anyone possibly insinuate such a thing?

Welp, looks like Yr Wonkette is going to have to briefly put away our "Shut Up, Richard Cohen!" memes, at least for a day or so, thanks to a pre-Thanksgiving leak that made its way to Buzzfeed last week. (While some of us were having the Thanksgiving vacation the lord and your editrix intended!) Apparently Cohen's editors at the Washington Post axed a line in a column by Cohen in which he recalled a friend telling him that Donald Trump once asked -- purely in a just wondering about stuff way, of course -- whether it might be wrong to find his 13-year-old daughter really, really bangable. Like, more bangable than his wife. Or even Bugs Bunny dressed up as a girl bunny, but you can still tell it's just Bugs in a dress. Wonder why they'd have removed that?

The quote was circulated Monday in a draft of Cohen’s piece “Our Next President, The Godfather” that was sent to outlets that syndicate the column, a source told BuzzFeed News. The quote did not appear in the later, final version of the piece carried by the Post and other outlets.

Cohen’s column details the president-elect’s increasingly blurred familial and political ties as he prepares to enter the White House.

Blurred lines. We get it! In an original advance version of the column circulated last Monday, the line appeared as an aside in a reflection about Jared Kushner, like so:

Jared Kushner, our Tom Hagen, who married Trump’s stunning daughter Ivanka — “Can I ask you something?” Trump asked someone I know, about his then-13-year-old kid, “Is it wrong to be more sexually attracted to your own daughter than your wife?” — has lately lost some of this Boy Scout aura. It turns out Kushner’s admission to Harvard was preceded by his father’s $2.5 million pledge.

In the version of the column published Tuesday, everything between the dashes was excised. We can see why. It really interrupted the logical flow of the sentence, what with readers spitting out their coffee and shouting, "He asked WHAT??!!" and never getting to the important stuff about Kushner's Boy Scout aura or the donation to Harvard. Maybe there was a place for it, but not there.

Fortunately, WaPo editorial page editor Fred Hiatt had a perfectly reasonable explanation for the little snip there; he emailed Buzzfeed to explain,

“We (or the Washington Post Writers Group, our affiliated syndicate) edit every column to try to make it as good as it can be.

“We don’t think it would be fair to our writers to discuss the editing process, and don’t see what is to be gained by talking about things that are not published -- there are countless drafts that never see the light of day,” Hiatt added.

Nah, no point going over why an editor might decide to change every little comma, em dash, or anecdote about the president-elect of the United States having once, allegedly and second-hand, expressed purely hypothetical incestuous feelings about his pubescent daughter. There's just no reason to second-guess the wordsmithing process. A hyphen here, a barely repressed desire for a socially taboo act that's a criminal offense in all 50 states there, you can't expect an editor to keep track of every little change.