Did Donald Trump File $17 Million Insurance Claim Because A Hurricane Damaged His Ego? 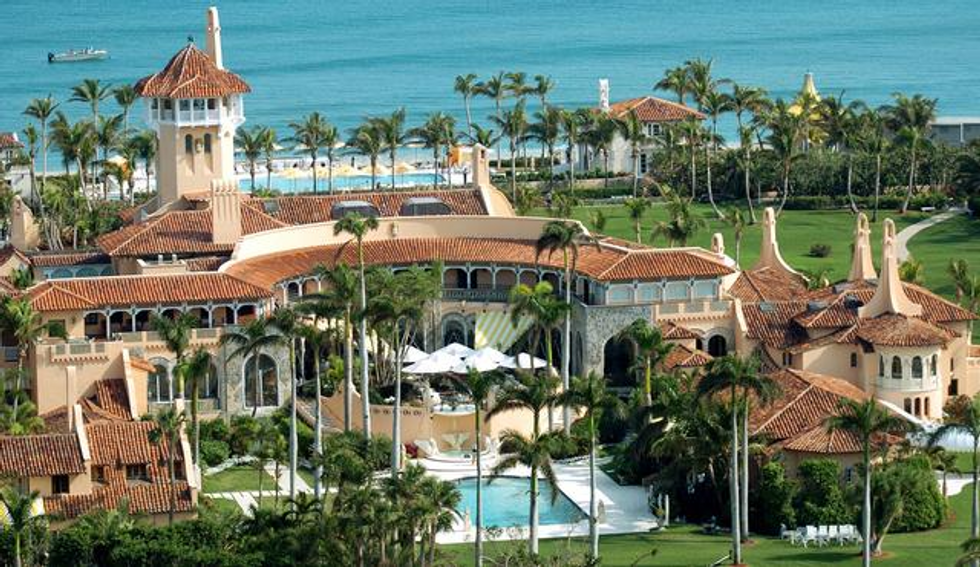 Hurricane Irma is heading directly toward South Florida, despite how Rush Limbaugh is pretty sure it's a #hoax designed by the Illuminati to line the thick pockets of Evian and Energizer. This means Donald Trump's tacky-ass southern outpost, Mar-A-Lago, is threatened. So we figured now would be a good time to revisit a story the AP broke last year, about how one time Trump took $17 million insurance ameros for Mar-A-Lago hurricane damage that may not have happened, at least not $17 million worth that anyone recalls.

The AP reported that, as of 2016, Forbes estimated Mar-A-Lago was worth about $150 million, and quoted Tim Frank, who was Palm Beach's planning administrator when the 2004-2005 hurricanes happened, who said damage to the tune of $17 million would have been YOOGE, and something they certainly would have known about. Yet they didn't.

Nobody else did either. Not even Trump people:

In an interview about the estate’s history, Trump’s longtime former butler, Anthony Senecal, recalled no catastrophic damage. He said Hurricane Wilma, the last of a string of storms that barreled through in 2004 and 2005, flattened trees behind Mar-a-Lago, but the house itself only lost some roof tiles.

“That house has never been seriously damaged,” said Senecal, discussing Mar-a-Lago’s luck with hurricanes. “I was there for all of them.”

The AP noted that just two weeks after Hurricane Wilma, Mar-A-Lago played host to the wedding of Trump's first son, GrundleSmack McLoserShits Junior, so we guess the club was at least in so-so shape. Or maybe it was COVERED IN RUBBLE and Junior tripped and fell on it and that's why his face looks like that. (Actually, the AP says Getty pictures from the wedding exist, and the house looks FINE.)

A couple years later, Trump was asked about the payout in a deposition, and said oh yeah, shit was rough, because, you know, the damages, oh the damages, they were tremendous:

“Landscaping, roofing, walls, painting, leaks, artwork in the — you know, the great tapestries, tiles, Spanish tiles, the beach, the erosion,” he said of the storm damage. “It’s still not what it was.” [...]

“We continue to spend the money because we continue to suffer the ravages of that hurricane,” Trump said. “We’re continuously spending money. It really beat up Mar-a-Lago very badly.”

Hurricane Wilma fucked that monkey grass right the fuck up. And the tapestries. At least three Spanish tiles flying in all directions. Beach went away entirely, because Hurricane Wilma was like "so many beaches, I'm gonna get sick of beaches." This shit happened, y'all.

Trump kept some of the money, though. Which is FINE. When you get an insurance payout, you do the fuck you want with the money.

But how did he get that much? Maybe he just was the best insurance customer ever and paid for a really badass policy that automatically pays out $17 million, even if the house barely breaks a nail during a hurricane. AP spoke to the guy who did the claim assessment, and my goodness, it seems he just can't recall:

The insurance adjustor who assessed the insurance claim, Hank Stein of VeriClaim Inc., said there had been damage to Trump’s golf course in West Palm Beach and damage to Mar-a-Lago’s roof and landscaping, but he could not remember details. [...]

Stein, who has since left VeriClaim for another firm, said he remembered water damage from rain after windows to an observation deck atop the mansion blew open. “I wish I could give you some more information on the breakdown,” he said.

It was probably the luxurious tapestries. Because if it was anything involving actual construction ...

The Republican mayor of Palm Beach at the time — and Mar-a-Lago member — Jack McDonald, agreed: “I am unable to comprehend $17 million in reimbursable damage.”

Jane Day, the city’s former historical preservation consultant, who helped oversee Mar-a-Lago’s conversion to a private club and who has visited in the years since as a guest, also was mystified. “This is the first I’m hearing of it.”

We offer all our thoughts and prayers for Mar-A-Lago during the coming storm, that it may make it through without any $50 million doorknobs coming loose or, God forbid, the gutters getting some sticks in them or something. That would be TOO 'SPENSIVE.

Wonkette salaries are fully paid by lovely readers like you! If you love us, click below and donate so we get paid!