Did Kellyanne Conway Just Shove Her Foot Up Her Husband's Ass Over His Mean Trump Tweet? 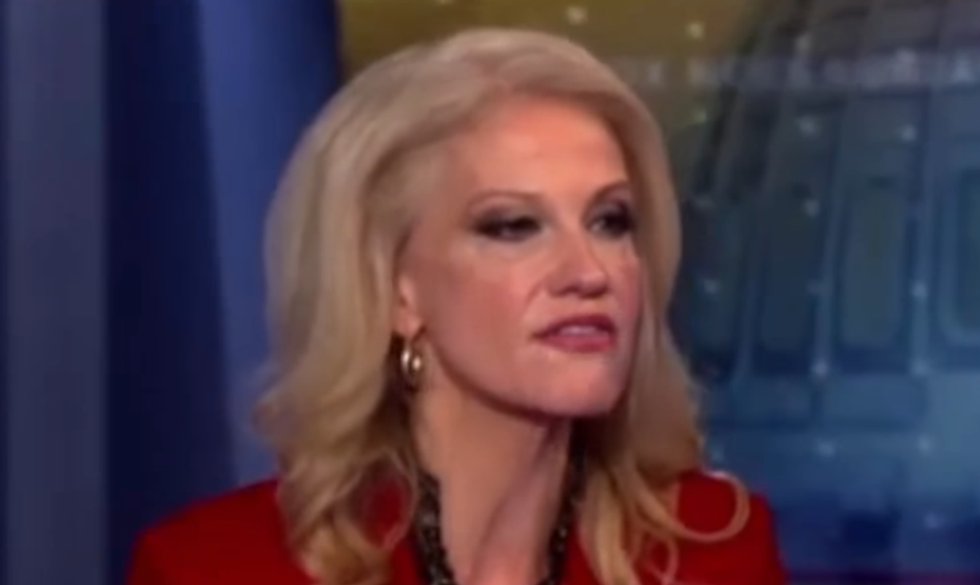 Earlier today, Kellyanne Conway went on the television to defend the indefensible again, which in this case was Donald Trump's lying/ill-informed/stupid tweets about the London attacks and his Muslim Travel Ban, which is not a ban (according to Trump's minions), but totally is a ban (according to Trump). His tweets came at an inopportune time, because right now the Trump regime is asking the Supreme Court to PLEASE take the case and say his travel ban is a really good ban that isn't a ban.

Conway told the critters on the "Today" show Monday morning to please stop obsessing over the president's Twitter Farts, because they are totally unimportant and don't represent Trump's true beliefs or policies. Or something. She was talking really fast and saying virtually nothing, as usual, so it was hard to figure out exactly what her point was.

One person who seemed to disagree about the importance of Trump's tweets was George Conway, legally wedded husband to Kellyanne, with whom she presumably shares a bed and the occasional sexxxytime. George is a big time wingnut lawyer who made his name as a Clinton-obsessed goon back in the 1990s (he was Paula Jones's lawyer!), and he was being considered for a Justice Department position until he "reluctantly" decided that "this is not the right time" for him to go to work for the Trump administration. He did not specify whether he was simply too busy washing his hair, or whether it's just because he's not in the mood to have his entire professional reputation ruined because he took a job in the Trump regime. Perhaps he sees what's happened to his wife's credibility and is like "NOPE NO WAY NUH UH DO NOT WANT."

Here is what George Conway tweeted this morning:

When we saw that, we were like "UH OH, you are going to be in BIG TROUBLE MISTER, and Kellyanne is gonna GIT YOU!" Well, it looks like we may have been correct, because it seems like Kellyanne, who used to be the blueberry princess of the entire exotic land of New Jersey, may have texted or Snapchatted her husband, or maybe she showed up at his office and threatened to go all Jersey Blueberry Lady on him if he didn't either delete the tweet or PLEASE CLARIFY that he still loves Donald Trump, who is the President of being Kellyanne Conway's boss.

KELLYANNE: Very good, George! Now subtly keep explaining that the president needs to listen to his lawyers and STFU on Twitter, because OMG, George, he doesn't listen to me or anybody else, like for real he is a man-baby who nods his head like he's listening and then immediately takes a dump on the floor when nobody's looking ...

KELLYANNE: Now say you love him again, George, and emphasize that you are only saying these things OUT OF LOVE, George, because remember, he only remembers the last thing he reads or the last person he's talked to ...

KELLYANNE: That's a good George. You may sleep indoors tonight.

We don't know if that's actually how it happened, but MAYBE IT DID.