Did Saudi Prince Torture A Guy On Jared Kushner's Info? This Is Not 'Good' 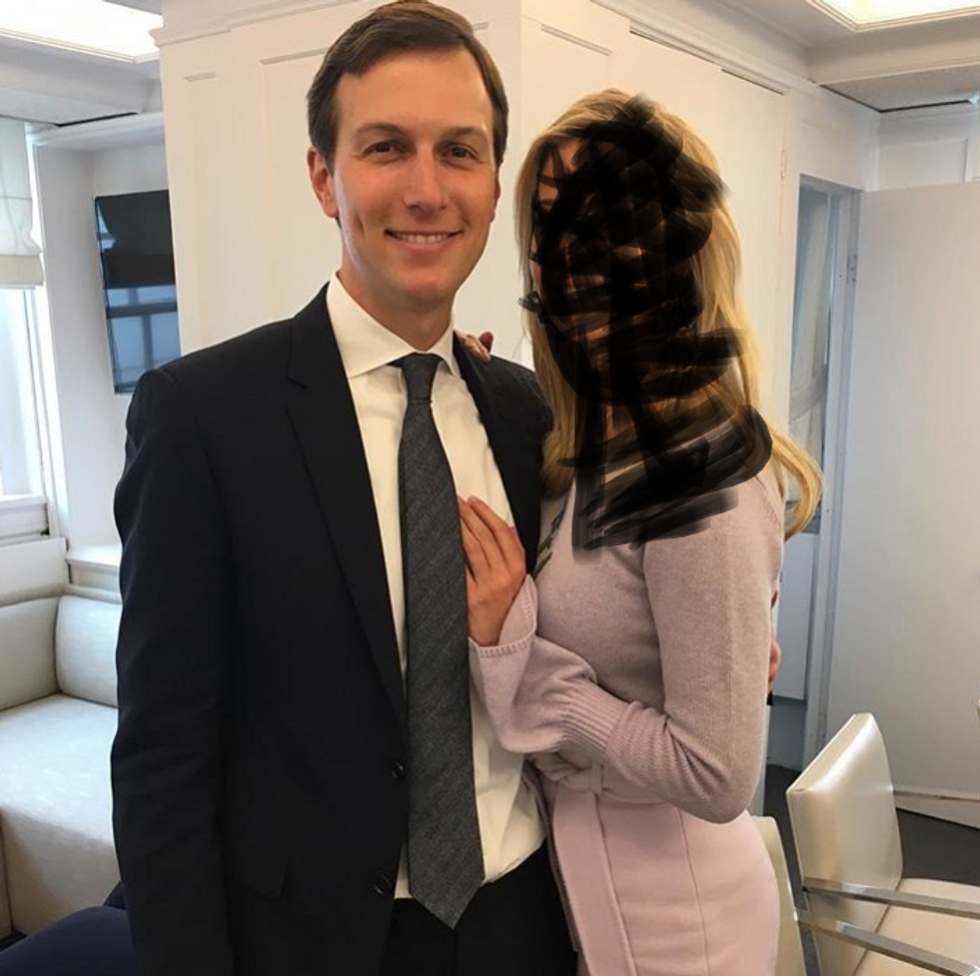 Is this the picture on the Saudi prince's nightstand? If not why not? (Orig. picture fromIvanka's Instagram)

Did we not JUST FINISH a story about the weirdo Saudi Arabian/Emirati angle of the Robert Mueller investigation? We did! What is this, a SAUDI ARABIAN SNARK MOMMYBLOG? Are those even legal in Saudi Arabia? Oh well, no matter, let's do another one!

Last October, Jared Kushner had a secret under the covers sleepover with Saudi Prince Mohammad bin Salman (the two boys are about the same age, after all!), whereupon they stayed up past bedtime every night and watched Skin-emax, shhhhhhhhh don't tell the King of Saudi Arabia or Ivanka!

A week later, Mohammad bin Salman AKA "MBS," who is next in line to the throne of King Salman, instituted a massive crackdown on his own royal family, and shit tons of people were arrested and got locked up, gratis, in the Riyadh Ritz-Carlton. It was weird, because at least one royal who got locked up in the luxurious slammer, Prince Alwaleed bin Talal, didn't appear to be a rival of MBS, but he is a loud critic of one Donald J. Trump, resident of 1600 Pennsylvania Avenue in Washington DC. Funny how he got locked up too, right? Oh well, let's not dwell on it.

Another royal rival of MBS's, Prince Mansour bin Murquin, was strangely killed in a helicopter accident just after Jare-Bear got out of Saudi airspace.

Well, well, well! Come The Intercept with a scoop, and it is that MBS has reportedly been bragging that he has Jared Kushner "in his back pocket," and also that he might have gotten the names of the royals who were disloyal to him by having his Bedtime Buddy Jared Kushner whisper them in his ear, based off what Jared read on Poppy's Presidential Daily Brief, back when Jared was allowed to look at stuff like that.

THE FUCK? First, some background:

In June, Saudi prince Mohammed bin Salman ousted his cousin, then-Crown Prince Mohammed bin Nayef, and took his place as next in line to the throne, upending the established line of succession. In the months that followed, the President’s Daily Brief contained information on Saudi Arabia’s evolving political situation, including a handful of names of royal family members opposed to the crown prince’s power grab, according to the former White House official and two U.S. government officials with knowledge of the report.

OK, so this is what Kush-Nugget had been reading on the potty for months. And then he flew to Saudi Arabia for his sleepover, which was No Girls Allowed, because pretty much everything in Saudi Arabia is No Girls Allowed. (Although MBS, amidst his corrupt fuckery, has instituted some reforms on that front!)

And after that, according to "sources," MBS told all his friends that Jared told him which Saudi princes were Total Basic Bitches who keep trying to make "fetch" happen, so he did a crackdown against them the next week. And some of the people MBS rounded up were in fact listed in Kush-wad's potty PDB materials. One was tortured to death in prison, and please remember, for the purposes of this post, "prison" is still defined as "Ritz-Carlton."

No really, this is happening right now, you are not having a weird dream.

Jared's spokesperson responded to this allegation by claiming, in essence, that "Nuh uh Jared did not tell his Saudi boyfriend that stuff." Duly noted. In fact, the spokesperson pulled the whole "I CANNOT EVEN BELIEVE YOU ARE ASKING SUCH CRAZY QUESTIONS RIGHT NOW!" rigamarole, so you know it's probably true.

Now, the Intercept does note that it's possible MBS is just talkin' shit, trying to be all "My boyfriend's father-in-law is the King Of America, aren't you so J of me right now?" Indeed, one of the quotes from MBS, reported by The Intercept, is that he told Crown Prince Mohammed bin Zayed of the United Arab Emirates that Kush-baby is "in his back pocket." It's entirely possible MBS already knew who to do crackdowns to, and didn't even need He Went To Jared whispering sweet nothings up the inner leg parts of his flowing robe.

But The Intercept also goes on to note that, if Kushner did this, it's WHOA IF TRUE no matter what, but if he did it without the permission of his father-in-law Dipshit McOrange, he also might have broken the law by jizzing classified information all over his Saudi boyfriend, all willy-nilly like.

WHY DOES JARED KUSHNER STILL HAVE A JOB IN THE WHITE HOUSE?

He's in the "back pocket" of MBS, he's apparently so buddy buddy with MBS and the crown prince of the UAE that they constantly sext each other on WhatsApp (seriously, because we guess Jared kept outing himself on Grindr by putting "Looking for a Saudi royal who will do that thing with his tongue Ivanka won't do"), and MEANWHILE the Kushner family is begging literally the whole world for a billion dollars to save their scraggly bankrupt asses, which has led bigwig government officials from several nations (including the UAE!) to be like "LOL this boy is FRESH MEAT," according to United States government intel intercepts.

Read the rest of the thing in The Intercept yourself, and then go back and read the OTHER thing we wrote about the Trump administration's Saudi Arabian foreign policy, which involves us shitting all over our ally Qatar (where CENTCOM is! and where 11,000 AMERICAN TROOPS are!), possibly because Trump is being bribed, and also maybe because Kush-rocket is mad at Qatar for failing to bail his ratchet ass family out of their hole.

As for Wonkette, we are going to fetch our inhaler.

Wonkette has no ads and is SOLELY funded by donations from YOU.