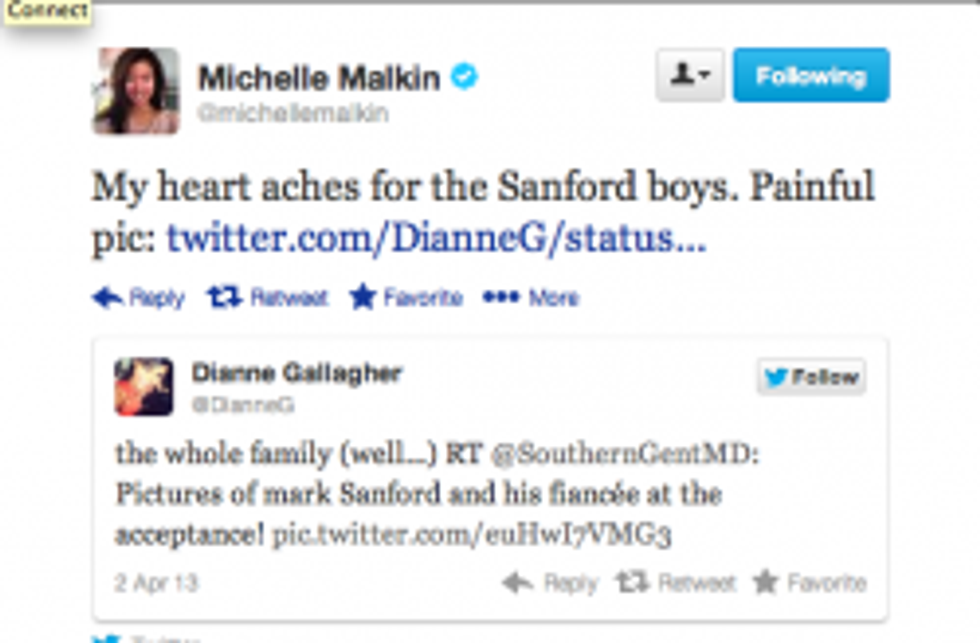 A few years ago Mark Sanford was enjoying his time in the national spotlight as one of those Republicans whose “nice" demeanor appealed to dull Politico reporters, and whose constant desire to kick the poors in the balls gave David Brooks tingly feelings in his swimsuit region. However within months of having his name being seriously considered as a possible 2012 Presidential Candidate, Sanford publicly committed career seppuku by admitting to an extra-marital affair in the weepiest and most melodramatic press conference in history. Surprisingly, a party that is effectively controlled by a small army of creepy televangelists can still feel a vestigial sense of shame, and thus Sanford was effectively toast...

Or so it seemed until this year, when Jim Demint left the Senate to become the Grand Imperial Wizard of the Heritage Foundation and was replaced temporarily by Congressman Tim Scott, leaving South Carolina District 1 open. Sanford used to be the Representative of this district back when he was a dick swinging foot soldier of the Moral Majority instead of the droopy hound dog who couldn't stop shitting on the carpet. This opportunity to re-ignite with an old flame without resorting to awful poetry has compelled Sanford back into politics, and it seems that Republicans across the state (and the country) are reacting to the news with about the same enthusiasm as someone being told “yeah it’s probably benign.”

Beyond the fact that Sanford’s name is indelibly marked with the crusty stain of his dulce de leche flavored affair, the fact that the South Carolina Democratic Party actually found a candidate who is not an accused sex-offender is scaring the hog fat out of the GOP:

The concern among national Republicans that [Democratic Nominee Elizabeth] Colbert Busch could steal the 1st Congressional District seat is so real that they’re prepared to do whatever it takes to shepherd the former Republican governor to victory — including dumping cash into the race, sources told POLITICO. But Sanford forces will have a hard time overwhelming Colbert Busch in the competition for dollars: Her brother is going all out to raise cash for his older sister

Colbert-Busch’s brother is the universally beloved Stephen Colbert, whose skills as a comedian would be a dangerous weapon even against a candidate who hasn’t spent the last four years constantly apologizing for being a giant hot mess.

So how does the Republican Party plan to support the campaign of a man whose ex-wife publicly exposed him as an insecure man-child whose political career only persisted due to the soft bigotry of low expectations (and sweet sweet federal money)? Well finding somebody to vouch for the poor asshole might be a good start:

Not a single member of the South Carolina congressional delegation has endorsed Sanford, an indication of his weak standing among his would-be Washington colleagues. Two House Republicans backed one of Sanford’s GOP primary rivals. GOP leaders are grappling with how to get the delegation on board now that he defeated former Charleston County Councilman Curtis Bostic in the runoff.

Mind you this is a party full of people who still allow David Vitter to speak in public about issues of morality and think that utterly detestable assholes like Jim Demint are kind and cuddly. Just how awful is Mark Sanford? Well he has even managed to put a bad taste in the mouth of hate crime sommelier Robert Stacey McCain, who has been wearing out the brim of his stupid hat while scowling at the thought of Mark Sanford re-entering congress:

[P]olls indicate that Christianity itself is now viewed as a liability by South Carolina Republicans, unless it is the cheap-grace gospel wherein Mark Sanford’s 2009 embarrassment is shrugged off as something inconsequential that only the Liberal Media Elite care about. There may still be Republicans who take “family values” seriously, but they are neither fashionable nor influential, and none of the Wizards and Gurus think that the anti-adultery vote will amount to a majority in today’s GOP runoff.

Mark Sanford is facing a well financed candidate whose campaign is being assisted by a notable comedian (which is a massive upgrade over the DCCC) and is so far unable to appeal himself to either the malignant asshole power brokers of his own party or the essential constituent group of grassroots racists. You would think that Sanford’s best strategy would involve downplaying his horrendous 2009 and highlighting other aspects of his candidacy, but apparently Mark has another plan in mind and will be doing campaign events with his former mistress (now fiance) in tow. Why? Because Sanford is both a political genius, and is in LOVE GODDAMMIT.

You know someone is a scummy monster when he has managed to disgust Michelle Malkin.