Do Republicans Hate The Trump Pee Hooker Dossier Because It's TOO TRUE? 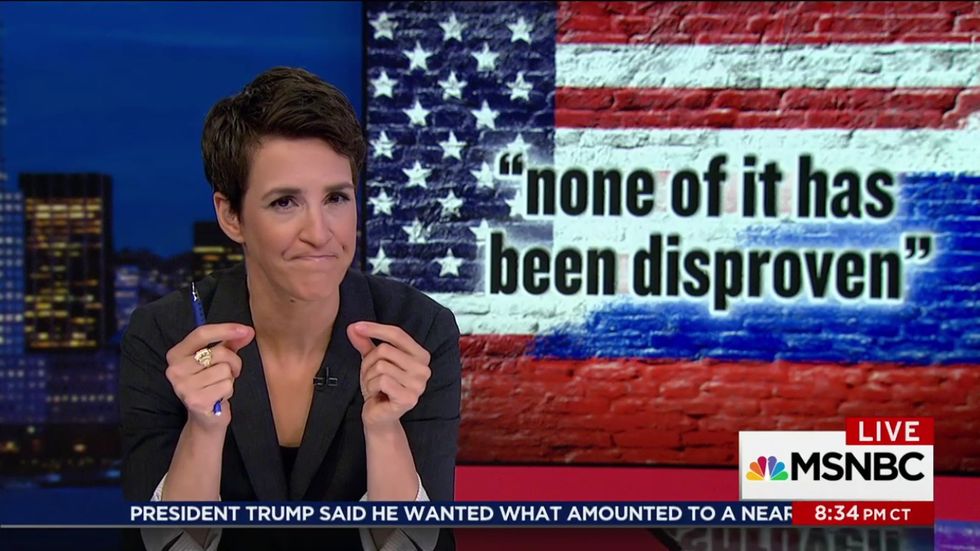 Hi Rachel, it's us, Wonkette!

Reuters had a piece Wednesday from investigative reporter Mark Hosenball, looking at how the various Congressional committees investigating Trump and Russia have been handling their inquiries, and it included a juicy, easily overlooked tidbit about the Steele Dossier, the collection of raw intelligence compiled by former MI6 spy Christopher Steele:

“As I understand it, a good deal of his information remains unproven, but none of it has been disproven, and considerable amounts of it have been proven,” Democrat Sheldon Whitehouse, a member of the Senate Judiciary Committee, said in an interview with Reuters. He did not elaborate.

Oh hot damn, whoa if true! It sounds to us like, if nothing (nothing!) has been disproven, and "considerable amounts" have been proven, maybe the problem for Trump-loving Republicans on these committees is that the dossier, with all its claims of massive Russian collaboration with the Trump campaign and illegal business dealings by the Trump organization, and ALSO ALL THE PEE SEX, is too correct for their comfort. Therefore, because they love the GOP and Trump far more than they love America, some of these legislators feel compelled to shit all over the messenger.

GOP Senator Richard Burr, chair of the Senate Intelligence Committee, alluded to this last week when he and his Democratic counterpart Senator Mark Warner gave a "progress report" on their investigation. Burr said they had "hit a wall" and only had been able to reconstruct the dossier backwards to June 2016 or so, and begged for Christopher Steele to come talk to his committee. But Rachel Maddow broke news that night that actually he was very willing to talk to them! It seems more like Burr and Steele have been having a tiff about the terms of Steele's testimony, over whether the spy will reveal sources and the like. Regardless, that investigation is chugging along.

But those OTHER two Congressional committees, Jesus lord WTF.

In the Senate Judiciary Committee, GOP Senator Chuck Grassley has been holding dog-and-pony show hearings trying to create a conspiracy theory that it was RUSSIA that hired the intelligence firm Fusion GPS to make up salacious fake news about Trump, in order to help HILLARY. The smoking gun, of course, is that Fusion has had a Russian client before, therefore ALL ITS WORK must be for the Russians. Chuck Grassley, stupid man, is apparently unaware that in the free market, an intelligence firm or a law firm or a Jiffy Lube might have MORE THAN ONE client, and that changing the oil on a Camry owned by a Russian one time does not actually mean they are "working for the Russians."

Meanwhile, in the House Intelligence Committee, chairman Devin Nunes is doing much of the same dog-and-pony shit, issuing subpoenas to Fusion GPS and sending his crack team of investigators to harass Christopher Steele in London, in the Russia investigation he's supposed to be recused from. Devin Nunes's bad behavior has been well-documented in the august pages of Wonkette, so no need to rehash it here. All's we know is that motherfucker is either blindly in romantic love with Donald Trump, or the Russians have a pee tape on him too. (Or both!)

Rachel Maddow interviewed Mark Hosenball, the Reuters reporter, on Wednesday night, and they discussed how we already knew certain things in the dossier had been corroborated, like the summer vacation trip Trump idiot Carter Page took to Moscow. The Trump administration has admitted he went to there! Now, the dossier alleges that Page was doing backroom dealings with Russia, negotiating for the sale of a large stake of state-owned oil conglomerate Rosneft to a confusing consortium of actors, and investigators may or may not have corroborated that specific meeting (yet), but he sure as shit was in Moscow when Steele said he was!

Likewise, Trump idiot lawyer Michael "SAYS WHO?" Cohen tried to "debunk" a part of the dossier that mentioned his name back in January, when Buzzfeed put the whole damn thing online. Cohen tweeted a picture of his passport, which PROVED (did not prove) he had never been to Prague in his life, and definitely not in August/September 2016, as the dossier suggests. We understand why Cohen would want to get in front of that allegation, considering how it's one of the dirtiest allegations in the entire dossier, even dirtier than a beefy Trump clapping his hands while hooker ladies pee everywhere:

On Maddow's show, Hosenball noted this has not been disproven, adding that "certainly it's possible to get to Prague from overland in the European Union without using a passport across a whole bunch of country lines." In other words, STFU with your passport picture. As Wonkette noted months ago:

Of course, [Cohen] reportedly vacationed in Italy last July and wouldn’t have gotten his passport stamped if he took a short hop, skip and jump to the Czech Republic real fast.

Because the dossier is raw intelligence, it's possible Steele got the month of Cohen's jaunt to Europe slightly wrong! But didn't Richard Burr say they had reconstructed the dossier back to June of 2016 or so? Wouldn't August/September (or maybe July) 2016 events in the dossier fall within the timeframe of what the Senate investigators have been able to reconstruct?

We found out last week, for sure, that special counsel Robert Mueller is using the dossier as a map in his investigation, and Mueller is no dumb-dumb. He wouldn't be using it if it was just a buncha made-up bullshit. And now we hear from Senator Whitehouse that Congressional investigators have disproven nothing in it. As in, every time they've looked at at a thing to see if there was "there" there, there has been a "there" there.

So we're back to the original question posed in the headline. Do Republicans and Trump hate this thing because it's TOO TRUE? It seems like that's more and more a possibility.

Wonkette recently had a piece about how, back in February, Trump was tantrum-ing all over the place about the Foreign Corrupt Practices Act (FCPA), because it's just UNFAIR that American companies aren't allowed to do bribes with shady foreigns. We noted that, FUNNY STORY, the dossier features a whole section about how Trump and his people didn't mind all the focus on Russia, because it deflected attention from Trump's illegal business dealings all over the world:

Ooh, bribes and kickbacks! We noted in our piece that in January, just a few weeks before, former FBI Director James Comey had visited Trump to tell him about the dossier, and mused that maybe Comey had shoved the dossier in Trump's face and said, "IF ANY OF THIS IS TRUE, YOU'RE FUCKED."

Maybe this is why Steve Bannon reportedly said Trump only has about a 30% chance of finishing his term as president.

BRING ON THE PEE TAPE!