Do You Think Trans Kids Are 'Satan's Plan'? Congrats, You're A Trump Judge! 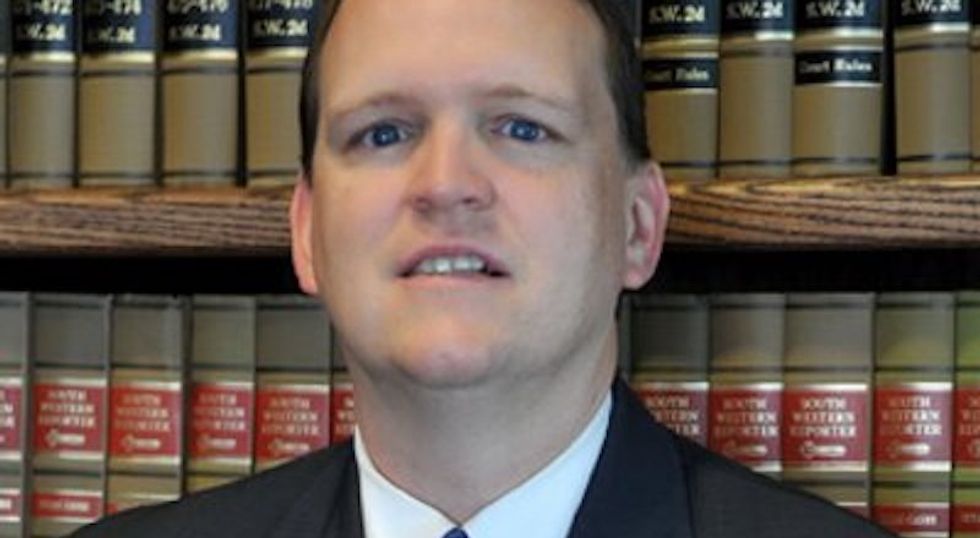 This is his Twitter profile pic, so it's not like I selected it just to be mean. He thinks it's good.

Jeff Mateer, the current first assistant attorney general of Texas, is Donald Trump's nominee for a judgeship in that state. He is also a person with some real interesting ideas about trans children and gay people and polyamorous people and pretty much everyone else who is not pretending to be the gender he wishes them to be or having relationships he does not approve of. Views that might not make him a particularly unbiased judge.

Mateer aired these views in two 2015 speeches given in his previous capacity as the general counsel of the First Liberty Institute (previously known as the Liberty institute), a Christian advocacy organization.

In one speech, titled "The Church and Homosexuality," Mateer explained that transgender children existing and using public bathrooms was all part of "Satan's Plan."

The Church and Homosexuality Part I w/ The Liberty Institute from Rochelle Schafer on Vimeo.

Oh yeah, can you just picture Satan sitting there, on his throne in hell, going "MUAHAHAHAHAHAHAHA! They're allowing children to use public restrooms instead of publicly ostracizing them like how God wants! My plan is all coming together now! Soon, people will be really nice to first graders across the world! Muahahahahaha!"

I mean, no offense Mateer, but if Satan is a bad guy and God is a good guy, then why is God's plan the only plan that involves being shitty to six-year-olds?

If you want something done right, you just have to do it yourself.

In that same speech, Mateer railed against same sex marriage, polyamorous people, and people who want to marry trees or their pets. For the record, trees and pets cannot consent to marriage (and neither can laptops):

"I submit to you that there'll be no line there," he said. "And actually in the arguments Chief Justice Roberts, who's in the center there said, I mean, what is the limiting? Why couldn't four people wanna get married? Why not one man and three women? Or three women and one man? And we're gonna spare you some of those slides. We actually have a presentation that we get into it. And I'll tell you, we say it's PG-13, it may be R, or what do they call the next one? NC-17 or whatever?"

He continued, "I mean, it's disgusting. I've learned words I didn't know. I mean, other than...my assistants here, have you ever heard the word 'throuple'? 'Throuple' so that's three people coming together of different sexes, maybe mixed sexes. Them coming together. There are people who marry themselves. Somebody wanted to marry a tree. People marrying their pets. It's just like -- you know, you read the New Testament and you read about all the things and you think, 'Oh, that's not going on in our community.' Oh yes it is. We're back to that time where debauchery rules."

Are there not better things for Christians like Jeff Mateer to be worrying about than the impending horror of tree marriage? Like, do you think they could ever take some time off from that and go feed some poor people or something? Jesus wasn't sitting around worrying about people marrying trees all the time. He was probably too busy feeding the poor and taking care of the sick and doing magic tricks, and did not have time for that. What a luxury it is, really, to have all that spare time to twiddle one's thumbs and ponder tree marriage.

In another speech, in November of 2015, Mateer lamented the fact that several states did not allow parents to electrocute the gay out of their children:

"Biblical counselors and therapists, we've seen cases in New Jersey and in California where folks have gotten in trouble because they gave biblical counseling and, you know, the issue is always, it's same sex," Mateer says in audio obtained by CNN's KFile. "And if you're giving conversion therapy, that's been outlawed in at least two states and then in some local areas. So they're invading that area."

This, too, is probably part of Satan's evil plan to make people be less horrible to children.

More seriously, if Mateer were to secure a judgeship, it seems pretty clear that he would pose a significant threat to the health and welfare of Texas children and LGBTQIA citizens. It seems likely, given his very passionate views, that he would use his position to prevent Satan's Child Welfare Plan from becoming reality. And that is very, very frightening.

Wonkette is nice to children! Please give us some money!