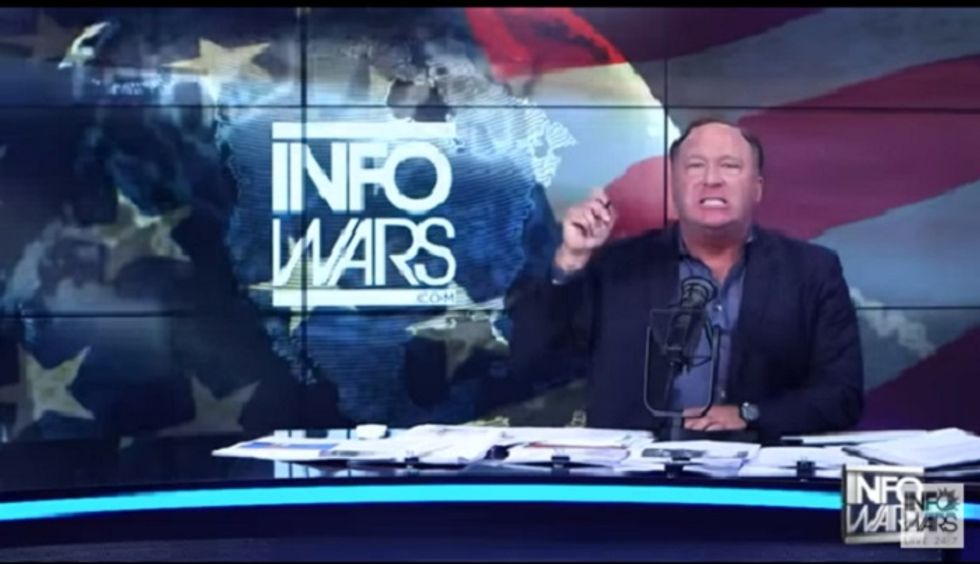 DRUDGE SIRENS EMERGENCY BROADCAST DEEP STATE ALERT WARNING! Some guy who shows up on Alex Jones's conspiratainment complex was grabbed by the FBI and detained yesterday after he got off a plane from London, and now nobody knows where he is and it's all part of a desperate attempt by the DEEP STATE to shut down free speech and maybe even overthrow Donald Trump! Or at least that's what Jones and his InfoWars buddies are all claiming on Twitter and on InfoWars; no real journalism places are touching it (yet), which if you think about it simply proves how deep the conspiracy goes. Here, have some breathless tweetings from the most reliable people on the internet!

Also, don't read the follow-on tweets or your brain may explode. Samples (please hold your skull together):

How true this is. In a Very Special Infowars EMERGENCY BROADCAST last night, Jones said occasional contributor to InfoWars Ted Malloch had made an emergency phone call to WND conspiracy loon Jerome Corsi, saying that he'd been grabbed after getting off his plane and interrogated and told he'd be forced to testify before a grand jury next week. According to Jones, the interrogators told him, "We want to know about Roger Stone, we want to know about Corsi, we want to know about InfoWars" -- because of course the Deep State is out to get everyone who wants to tell you the truth. Jones went on to insist that Malloch had now gone silent, and if anyone's not answering their phone, that is for sure proof they've been spirited off to a Black Site.

The crazy starts around the 18:20 mark if you feel like watching. It's your brain, after all:

Malloch briefly made it into mainstream news last year when he claimed he was Donald Trump’s first choice to be the next US ambassador to the European Union, which isn't exactly true. As in, he was never under consideration for the job at all, no matter how many times he insisted on Twitter that he was. He was in favor of Brexit, wants the EU to disband, and, as the Financial Times noted last year, has a real habit of fibbing about his own brilliant achievements.

In his autobiography, Malloch said a documentary he made for PBS had been "nominated for an Emmy" -- not quite. The station which made the program had actually submitted it for consideration in the "Lower Great Lakes Chapter Regional Emmy" awards, but it hadn't actually been nominated. He also claims that in 1992, Margaret Thatcher praised him in a speech as a "genius" and as a "global sherpa" -- whatever that is. But no, video of the speech shows her saying no such thing. He claimed a knighthood, and said his friends and family all call him "Sir Ted." Maybe they call him that as a joke, since the honor he actually got was "several ranks lower than a knighthood. It does not carry a right to a title and members do not attend an investiture with the Queen." And he also claimed that in a low-level post in the UN, he "helped bring down the Soviet Union," possibly in the same way that anyone who moved any paper involving the Grenada invasion got a medal. Then there's his amusing claim to be related to Theodore Roosevelt -- you know, his full name is "Theodore Roosevelt Malloch." The Financial Times looked into that as well. Rather cattily, at that:

Oh, but that's just a postscript to the article, which is about that time that Malloch and his wife filed for bankruptcy in 2013, but were not allowed to write off $5.9 million in debt to two US banks because the couple had lied to the banks about their assets in the first place, and loans secured under false information can't be written off in bankruptcy court, too bad, so sad. But the Mallochs withdrew their claim for those debts, and at least managed to avoid any actual fraud charges.

So it's entirely possible that maybe not a bit of this supposed arrest by Team Mueller is real, or perhaps Malloch really was detained at customs and questioned -- in any case, there's nothing about this out there in Real World news, and for that matter, no indication that any of this has anything to do with Russia. Maybe Malloch met with Julian Assange! Maybe Malloch wants to hint he did!

Within the last hour, WND crank Dr. Jerome Corsi, PhD, has at least revealed that Malloch is out of stir. If he was in stir at all:

So there you go! MALLOCH CELLPHONE THUGS, we should add, would be a terrible name for a band. With any luck, we'll soon know what REALLY happened, and if it doesn't involve an alligator, a pot stash, and a stripper pole, we'll be very disappointed.

Yr Wonkette is funded entirely by reader donations. Please click here so we can keep bringing you the TRUTH.