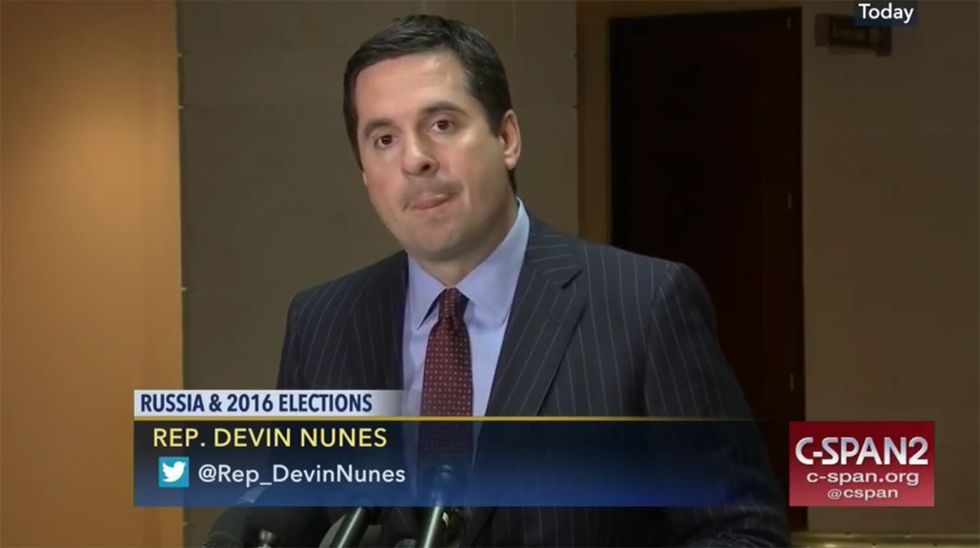 christ what a fucking idiot

What is this, Day Six of Devin Nunes's latest justice-obstructing distraction? Something like that! If you've been playing hooky from life this week or forgot, Devin Nunes, Donald Trump's little buttercup who chairs the House Intelligence Committee, has WRITTEN A TOP SECRET MEMO (or his aides wrote it) that definitely certainly absolutely blows the roof off the biggest scandal since Watergate, which is that there is a deep conspiracy in the FBI to 1) say mean things about Donald Trump via text messages, 2) uphold the Constitution of the United States of America and 3) protect America from foreign interference in elections by hostile powers like Russia. Oh yeah, it is the WORST, and Devin Nunes has the RECEIPTS.

Or at least he says he does, because you're not allowed to see it. Oh, there is a big fake campaign on the internet, led by Russian bots and MAGA trolls, to #ReleaseTheMemo, and to beg Donald Trump to declassify it so everybody in America can see THE HORRORS, but ehhhhhhhhhh, Devin Nunes doesn't really want to #ReleaseTheMemo until it feels right. (House Republicans are currently looking at an obscure prodecural tactic to secure the release when that moment comes!)

Nunes shared it with the entire House of Representatives (which led Democratic committee ranking member Adam Schiff to call it some LOL talking points BULLSHIT) but he won't share it with the FBI or Justice. He's rubbing his special memo down his pants on his No-No Zone, but he won't let Richard Burr, the GOP chair of the Senate Intelligence Committee -- you know, the grownup intelligence committee -- see it. If he showed Richard Burr, Burr might tell reporters Devin Nunes is full of shit, just like he did with Nunes's bullshit "unmasking scandal."

Gah, Richard Burr is such a Deep State Party Pooper!

Nunes also won't show it to Senate Judiciary Committee Chairman Chuck Grassley, which is sad, because Grassley is one of the only GOP senators thoroughly stupid enough to co-sign Nunes's extracurricular activities.

Well now, the Department of Justice has officially cockpunched Devin Nunes in the face over his dumb little memo, and oh boy, the letter DOJ sent him is a doozy! It was written by Assistant Attorney General Stephen Boyd, who is this guy:

As Wikipedia explains, Boyd is not some HILLARY JAMES COMEY BENGHAZI DEEP STATE guy. In fact, he was on Jeff Sessions's staff, when Sessions was a senator, and he's also worked for Alabama GOP Rep. Martha "I don't think you're very funny, Hillary" Roby.

So that is some context for this Let's Kick Devin Nunes In His Dumb Face letter. Let's take a lookie!

First of all, DEVIN, if shit is rotten at the FBI and you know something about it, DEVIN, don't you think you should tell us so we can fix it, DEVIN?

Second of all, DEVIN, if your super secret memo is so highly classified, DEVIN, why would you reveal classified information to the media and the American public without first letting the intelligence community check to see if your disclosures are going to murder our national security, DEVIN?

Third of all, DEVIN, if your dumb memo is what you say it is, DEVIN, it's based on classified information your committee hasn't actually read, DEVIN, and neither have you, DEVIN, you fucking idiot, DEVIN:

And fourthly and finally, DEVIN, if you really are high on your own supply and believe there is a massive conspiracy in the FBI, DEVIN, then you don't even have to give it to FBI leadership, DEVIN, you can give it to the inspector general, DEVIN, and we promise he will treat your memo real nice, DEVIN:

Adam Schiff, appearing on the MSNBC Chris Hayes Tall Cute Nerd Program, underlined the part of the DOJ letter about how Nunes and his BFFs haven't even read the underlying intelligence the memo is based on, and moreover, how House GOP committee members literally voted against allowing themselves to read it, because why would they do something like that? This isn't about real Congressional oversight, this is about Little Devin's crusade to do the bidding of Trump and the Kremlin:

The point was they didn’t care what was in the underlying documents. They wanted to make a political statement and feed the beast on Fox News. They wanted to do what they could to derail the Mueller investigation.

Now, in response to Devin Nunes's latest escapade, everybody wants shit released. Schiff has been forced to write a Democratic classified memo about how Devin Nunes is full of shit (#ReleaseTheMemo!), and Senate Judiciary Democrats Richard Blumenthal and Sheldon Whitehouse have demanded that Chuck Grassley release the transcript of THEIR committee's interview with Donald "WeenerStump McPantyDribbles" Trump Jr.

Blumenthal says its release would be "explosive"! After Junior's testimony concluded back in September, Democratic Senator Chris Coons's office released a statement reminding the world that lying to Congress is a crime. Why? Oh no reason!