Donald Rumsfeld Has Nothing To Say About Torture, But He'd Like Your Money 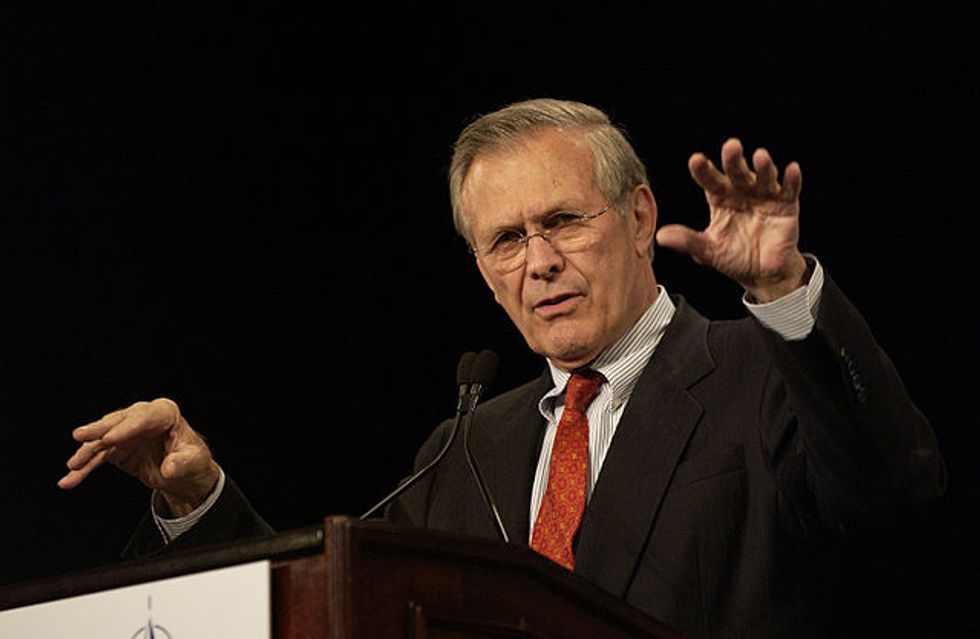 Remember the good old days, of, say, 2004, before we knew for an absolute fact that our government was torturing the hell out of detainees? All we had then were rumors and some photographs and maybe some videos and some blown whistles about some "bad apples" -- and a whole lot of denials from the Bush administration, who would never lie about anything, because "we don't torture."

And in case that wasn't enough for you stupid bleeding heart liberals, our not-torture techniques were nothing extreme, nothing too rough, nothing our very own Defense Secretary Donald Rumsfeld couldn't handle himself:

"I stand for 8-10 hours a day. Why is standing limited to four hours?"

So reads a note scrawled by Defense Secretary Donald Rumsfeld on a memo released by the Pentagon this week, in which he approved for Guantanamo interrogations techniques such as forcing them to stand, stripping detainees nude and threatening them with dogs.

If silly doddering old Rumsfeld could handle the so-called but totally-not-really "torture," what could possibly be wrong with using those same "enhanced interrogation techniques" on the Evil Terrorists Who Hate Our Freedoms?

Now that we finally, after all those years, have the summary of the Senate Intelligence Committee's report on how, yup, we sure did do ALL the torture, you know who hasn't had much to say today? Donald Rumsfeld. Here's what's on his mind today instead:

The Rumsfeld Foundation is supposedly dedicated to doing feel-good things for our troops and their families. And of course "free economic systems abroad." Rumsfeld was so brilliant at spreading democracy fairy dust across the globe, it's almost a shame he doesn't have his own army to help him spread "free economic systems" across the globe too. So yes, if you really care about helping others, the first place you'll definitely want to give your money is to Donald freakin' Rumsfeld and his foundation.

We're sure Rumsfeld will have a reaction to the torture report eventually. Probably something about how he also was "rectally infused" with his "lunch tray" of pureed hummus and pasta and peas and nuts all the time so what's the big deal?

Or maybe Rumsfeld will just keep his mouth shut. That would probably be best.