Donald Trump Already President Of All You Overrated Losers 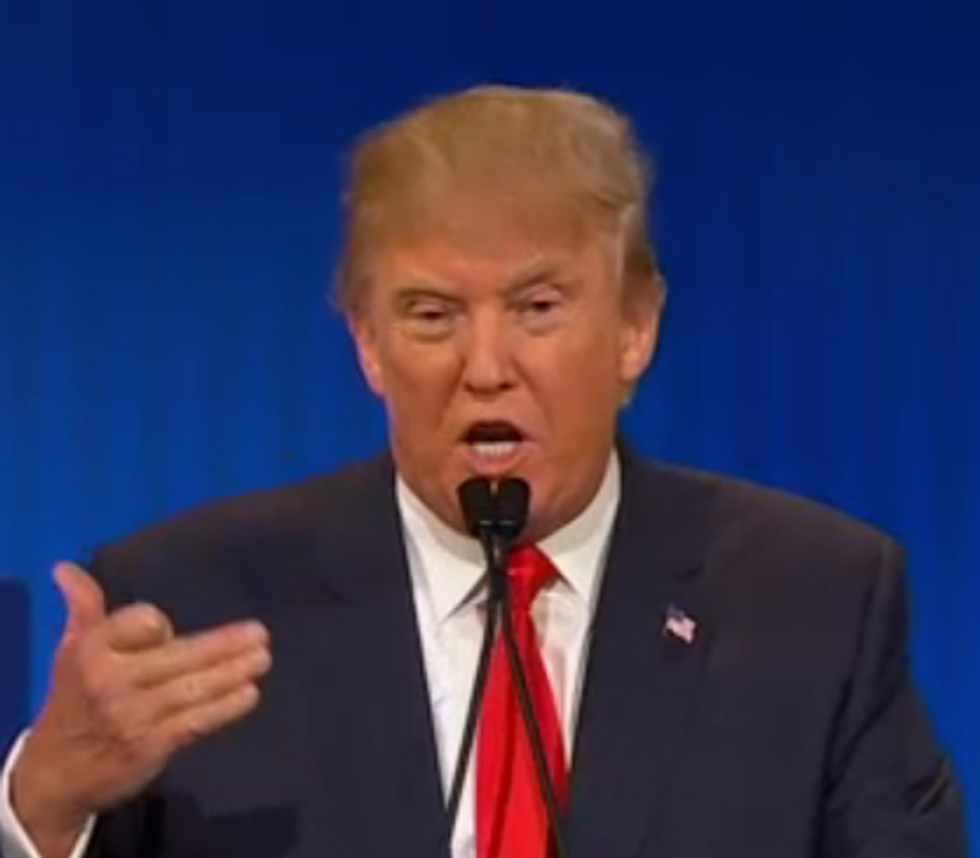 Donald Trump built a fence around the other candidates, and it was luxurious.

So that "debate" thingie last night, you saw it, yes? Where nine of America's biggest losers pulled out their gruesome dick junk and showed it to Fox News's Megyn Kelly and Bret Baier on live television, but nobody was paying attention, because Donald Trump's dick junk is the yooooogest and classiest and most beautiful dick junk in all of America, and also big rapey Mexico? Yes, that thing. So the overwhelming consensus, according to Donald Trump, is that Donald Trump built a fence around that fucking debate and made it his next wife, and if you don't understand that, well, you probably are gay for Megyn Kelly, who is overrated and a loser:

Also a giant loser who should be fired from life? That douchebag Fox News pollster Frank Luntz:

Why is our prince so upset? This completely scientific Time poll says The Donald won the debate, by LUXURIOUS margins. So does The Drudge Report. Of course, both of those polls obviously oversampled dipshits, but we're dealing with the GOP base here, so we'll give them a pass.

No, the debate was unfair, because Megyn Kelly was mean to Donald Trump, by asking him questions about his "past" and his "record" and also the fact he calls ladies "fat pigs." And then, when Trump explained that the only lady he says that about is Rosie O'Donnell (GET IT, WINGNUTS? SHE IS FAT AND A LESBIAN, AND YOU LOVE THIS JOKE BECAUSE YOU ARE EASILY AMUSED), Kelly was like "No, actually you're an asshole to lots of women, but good joke though, I guess."

“Only Rosie O’Donnell,” Trump smirked, prompting applause and laughter from the crowd.

“No it wasn’t,” she replied. “For the record, it was well beyond Rosie O’Donnell. Your Twitter account has several disparaging comments about women’s looks. You once told a contestant on ‘Celebrity Apprentice’ it would be a pretty picture to see her on her knees. Does that sound to you like the temperament of a man we should elect as president?”

So Trump responded to the situation by saying that Kelly is just really bad at her job:

"[T]he questions to me were not nice, I didn’t think they were appropriate, and I think Megyn behaved very badly personally.”

Right. Also, we guess he agrees with this one Twitter follower he has, who called Kelly a "bimbo," which is totally different from calling a lady a fat pig, so what's the problem?

For more reactions to Trump's performance, we now go to Donald Trump some more, explaining to professional dick licker Sean Hannity that he will totally run as a Republican, as long as the establishment people are nice to him. If they are not, he will fuck them up, by losing to Hillary Clinton as a third-party candidate. Oh and also, to people who say Trump doesn't have any political experience, he says, "I have more political experience than anybody," because he gave money to so many politicians:

In other news, there is officially no bad blood between Trump and Jeb! Bush, because Jeb! clearly stated during the debate that he did NOT say Trump is an "asshole," even though he probably totally did. Trump says that for Jeb! to say he is not an asshole is "a class act."

And finally, as we alluded to above, Trump is mad at Fox News pollster Frank Luntz, whose schtick is to get a bunch of homeschooled Republicans in a room and let them pick corn out of each others' poo while yelling, and boy howdy, Luntz's focus group of corn-pickers HATED Donald Trump:

Clearly Luntz picked the wrong Republicans! Instead of doing whatever "science polling" method he does when he picks a focus group, Luntz should have just pulled together a group of Trump's Twitter followers, because they are the real America and you are not. Look, here are some of the Twitter-Twatters Trump has retweeted in the last nine hours, THIS is a good focus group that will Make America Great Again: