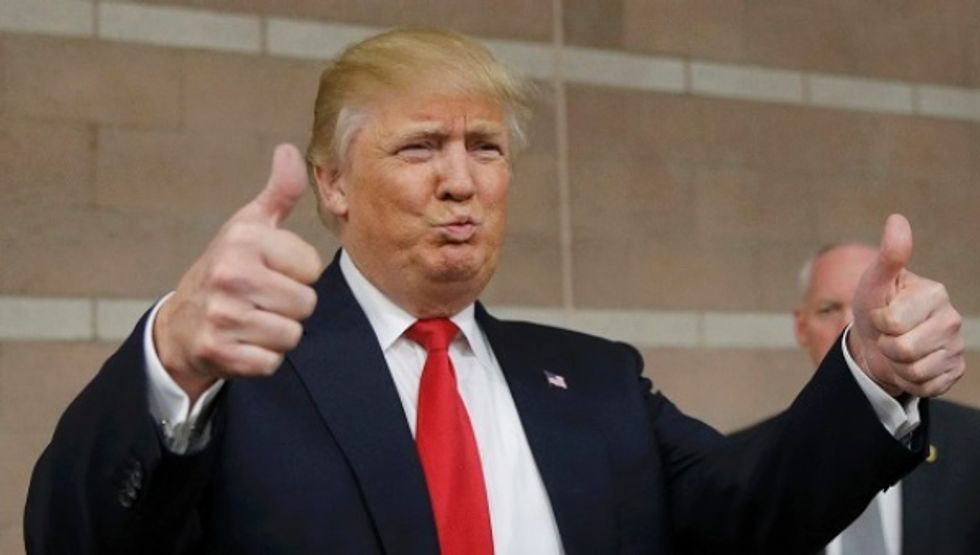 Donald Trump is the smartest, best guy. He wants to do a great job as president, and even though he's terrified us with approximately 102% of his cabinet appointments (we're counting the three million illegal California Mexicans he's appointed to his cabinet in secret, ALLEGEDLY, PROVE US WRONG!), it is very possible that deep in his big league heart he wants to be a president we look back on and say, "Man, that Donald Trump! He was the president of us, and we don't mean that in the bad way!" He told the New York Times he would like us to feel that way!

So we are going to assume that Trump had only the most terrific reasons for wanting to meet with Al Gore Is Fat at Trump Tower on Monday! They said nice words! Gore also chit-chatted with squishy libtard Ivanka Trump, daughter of Donald, who wants to use her time as first lady -- right yeah like that's not what's going on here -- to vanquish global warming once and for all. Lookit!

Gore met with Trump at Trump Tower on Monday and spoke briefly to reporters afterward. He categorized his meeting as a "sincere search for common ground."

He also dubbed it "an extremely interesting conversation" but when asked what was discussed he only said "to be continued" before leaving.

YAY, they love each other so much they are going to do "to be continued"! Sounds like a second date to us! Wonkette has gotten an advance copy of what the meeting with Trump looked like:

When you combine Gore's talky-talk with Trump with Ivanka wanting to keep the sea levels from rising, and also journalist Tom Friedman telling Trump, in the same NYT meeting we referred to above, that the world would be REALLY FLAT (and not in the happy way Friedman likes!) if all Trump's beautiful golf courses were underwater because of global warming sadness, maybe the message will get through. We should all encourage our president-elect to be the hero he was born to be, by saving the world from man-made climate change! (Here's why! Or you can read this link instead, which is better because it is us and not Slate.)

Now look, we know one of the worst climate change deniers out there, Myron Ebell, is doing the "EPA" part of Trump's transition team. And we are also well aware that Trump has been convinced in the past that the entire idea of global warming is a #hoax made up by the mean Chineses who won't even let him talk on the phone with Taiwan lady presidents. But PEOPLE CAN CHANGE!

YAY! We are encouraging our president-elect to not let Planet Earth die in a fire! Feel free to encourage him, in the comments, which are not allowed!