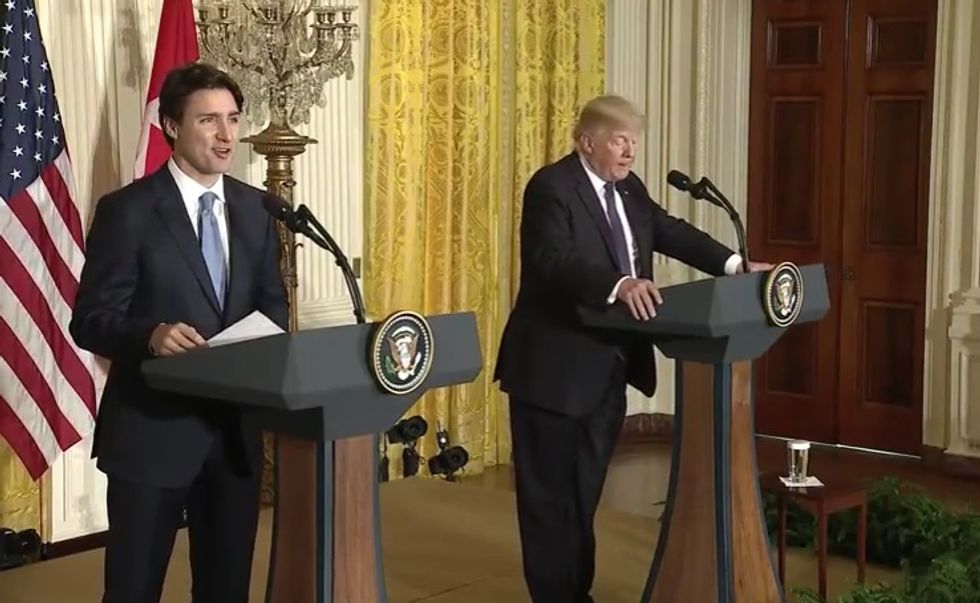 Justin, you gotta be careful playing this sucker. It tilts real easy.

Donald Trump and Canadian Prime Minister Justin "No You Can't All Move Up Here" Trudeau had a largely content-free joint "press conference" Monday, and there was not a lot of news generated; beforehand, they had apparently talked about women in business or something. Nobody even made a big deal out of the fact that Trudeau kept speaking in tongues, moved by the Holy Spirit, in a language unknown to man, yet simultaneously translated by a lady's voice into English (we are informed this was "French"). The tough questions were asked by Canadian reporters; Donald Trump chose to take softball questions about trade and "what is your greatest challenge" from a local rightwing teevee station and from Tucker Carlson's The Daily Caller. Here is our summary:

Question: Is trade with Canada good?

Trudeau: Infrastructure development good, but also you need to protect the environment.

Trump: I won by a huge margin! We're getting rid of the hardcore criminal aliens, the really bad ones, and everyone's very happy about that. [Ed. note: none of that is true. The sweeps have also picked up a 50-year-old house painter who immigration officers found while looking for someone else and an Arizona woman whose crime was using a fake ID when applying for a job a decade ago. Hardened criminals.]

Trudeau: We can take in refugees without danger because we screen them, and we're confident our security is good. We are not pussies like this Trump person [Ed note: implied].

Question: Mr. Trump, What's our most important national security issue? [Ed note: apart from you holding security meetings in the dining room of your own club...] And Mr. Trudeau, how big a dunderhead do you think Trump is with his ban on refugees?

Trump: Everyone loves our stance on security. We're getting the most praise. We're the best.

Trudeau: We've lived next to these clowns forever, so we're used to them being jerks sometimes. I won't lecture another country on how to govern themselves. I'm doing good back in Canada-land, so yeah.

Question: Will renegotiating NAFTA leave Canadians jobless, and Mr. Trump, are you going to screw over Canada?

Trudeau: Trade good! Good jobs for Canadians, and good jobs for Americans! We like America, and we know you make mistakes like this bozo here.

Trump: Trade good! Canada not bad like Mexico! Mexico unfair! Canada fair! I made all the jobs stay in America! I am the best! Should I mention Carrier again? No? I guess I will not! Everyone will be happy! That is all! Goodbye! No questions about Russia and Mike Flynn!

Question (shouted as Trump and Trudeau left): Mr. President, does Mike Flynn still have your confidence?

If you're a glutton for punishment, here's the video! Actual presser starts about 45:30: