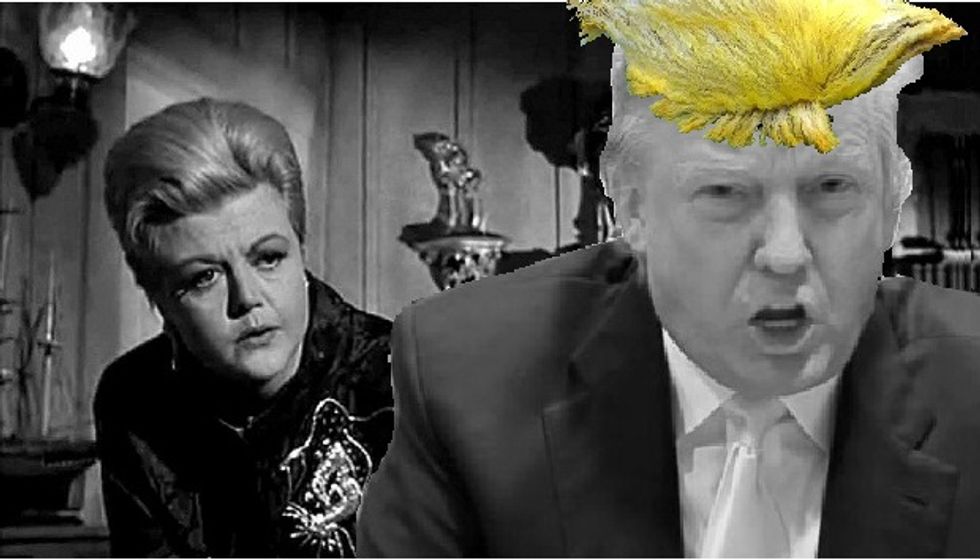 All of us here at Yr Wonkette have a singleminded devotion to pursuing the news, finding the truth of the day's events, sifting the truth from the lies, and then making a bunch of peener jokes about all that. And what better source of news, incidental revenue, and right-wing peeners than Newsmax, with its rich heritage of support from truth-seekers like William Casey, Richard Mellon Scaife, Alexander Haig, and Michael Reagan? But mostly it gets its filthy lucre from Dick Morris? Wait, why DO we have an RSS feed from them again? Oh, yes, the money. The sweet, sweet revenue from people who hate our filthy liberal guts and whose journamalism is always above reproach, even when it's dead wrong.

And you know who else thinks Newsmax is pretty awesome? It was in the headline, did you get it?

It is noted connoisseur of Fact-Based Truthiness FuckFace Von Clownstick, that's who! In a wholly-unsolicited tweet that came directly from his heart, noted flannel-moth-larva impersonator Donald Trump kvelled, for no apparent reason, over the general awesomeness of Newsmax, simply because he thinks it's awesomely awesome. We're pretty sure he just says stuff like this all the time, in between saying that wind power is wrecking the planet and that Anthony Weiner is a pervert who can never be cured of being a perverted pervert:

We figured that "Chris Ruddy" is just a name Trump picked at random out of a remaindered copy of Trump: The Noir Detective Novel, but he turns out to be a real guy who got his break in conservative journamalism by flogging the notion that Vincent Foster was not a suicide, and that Bill Clinton arranged to have Commerce Secretary Ron Brown shot in the head and then covered it up by killing 34 other people in a plane crash, because that is just how the Clintons do.

And as the rest of the article points out, Newsmax has some pretty awesome web stats, which Newsmax just happened to have on hand in case a major right-wing sleazeladle just happened to say that Newsmax is one of the top media outlets in the country. Talk about excellent timing! There is absolutely nothing in the following paragraph of self-puffery to suggest that Trump's tweet was anything but a completely spontaneous expression of love and support:

Newsmax is indeed a "top" media outlet — Newsmax.com has reached the No. 1 position in comScore’s News/Politics category.

You know what? That is a fuckload of "readers"! And we can guarantee no more than four of them were directed to Newsmax by your Wonkette. You guys hate that place!

Readers of Mr. Trump's tweet also commended Newsmax as "much better than Cats. We're going to read it again and again."