Donald Trump Does Not Want To See Your Disgusting Baby-Feedbags 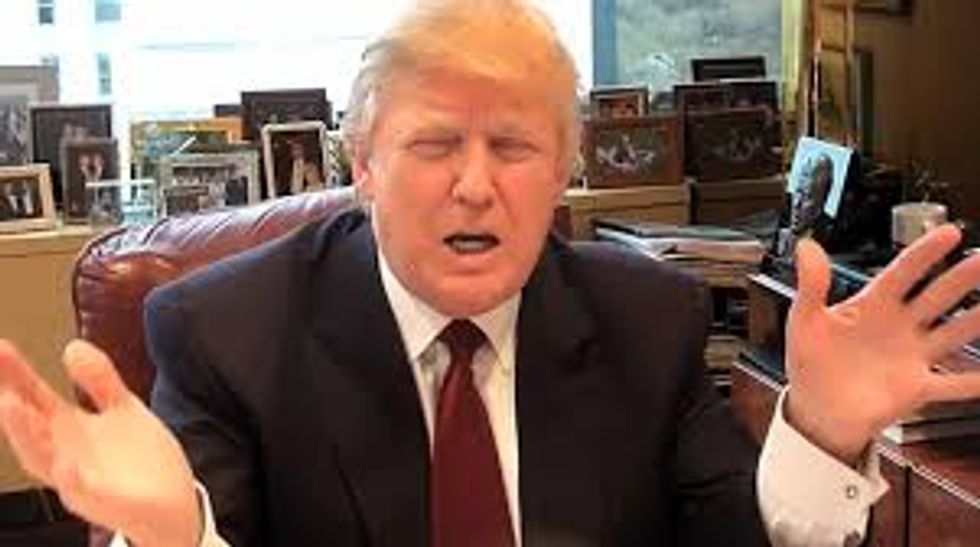 BREAKING: Donald Trump is kind of a dick! No, really, that's the latest scoop from the New York Times, which reviewed "hundreds of pages of sworn testimony" from a decade's worth of Trump lawsuits. (He is, as we have previously mentioned, a litigious shouty-faced douche-jockey.)

So this one time, when Trump was being deposed by a lady lawyer named Elizabeth Beck, whose questions he described as "very stupid," he was DIS-GUSTED when she asked for a medical break:

Mr. Trump and his lawyers objected, demanding that the deposition continue. Ms. Beck said it was urgent — she needed to pump breast milk for her 3-month-old daughter, and she took the pump out to make her point.

“You’re disgusting,” he told Ms. Beck, in a remark that is not disputed by either side. He then walked out of the room, ending the testimony for the day.

Trump, being Trump, denies nothing and is not sorry. He is, however, mad as hell that this stupid lawyer went on the TV this week to talk about what a dick Trump was to her, and the stupid loser haters on the TV didn't even mention the highly relevant FACT that Trump personally and gleefully kicked her ass, as he noted on the Twitter machine dot com:

Ooooh, stupid disgusting lawyer lady, you just been Trump'd! What do you have to say to that, huh?

As for Mr. Trump’s descriptions of her, Ms. Beck said: “I don’t think his opinion of me is important. I’m not the one running for president.”

She added: “The question is, How does he behave in a situation that is contentious and uncomfortable? Can he act with grace under fire or does he have a meltdown?”

Ms. Beck continued. “Why does a breast pump make him have a fit? What other contraptions are out there that would make this man have a fit? I’d like to know.”

Well, those are some good points. And come to think of it, we'd also like to know what other contraptions might cause Trump to have such a hissy? Donald Trump buttplugs, maybe, for your butt? Nah. Besides, Trump is far too busy being really proud of yet another poll that shows just how well he's doing in the presidential race:

Wow! That's a hell of a poll. Gateway Pundit Jim Hoft, the second stupidest man on the internet, sure is sexcited about it! Just one tiny detail Trump's overlooking:

As PPP explained to Business Insider:

However, the overall survey was much less positive for Trump. While the real-estate developer continued to dominate the Republican field, the Democratic-leaning firm's president said the results suggested that Trump would be an "unmitigated disaster" in a general-election match-up against former Secretary of State Hillary Clinton.

But as long as you ignore just how badly Trump would lose the general election, this is EXCELLENT news for Trump. YOOGE. Watch out Hillz, he's gonna beat you too, the way he always beats all the stupid women and their disgusting boobs. He's just that good.