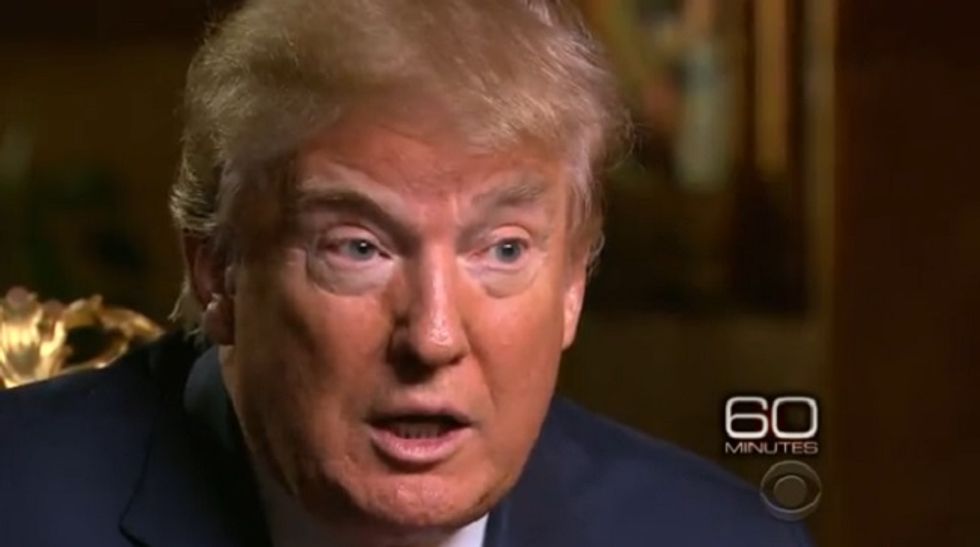 It's possible to slur whole categories of people without being a bigot, you know.

Donald Trump has finally found someone he's willing to be nonjudgmental about. Unfortunately, it's that moron at his New Hampshire rally last week, the one who said America's top problem is Muslims, the President is a Muslim, and also too there are Muslim training camps right here in America "where they want to kill us." All the nice man wanted to know was "when can we get rid of 'em?" So that's who Trump has decided it would be premature to call a "bigot," because he's never met the guy and given him a bigot test, we guess.

In a preview teaser for this coming Sunday's edition of CBS's "60 Minutes," Scott Pelley asked Trump why he'd elected not to challenge the questioner who described Muslims as "a big problem" for America:

As usual, Trump reframed the question to make it clear to Pelley that if anyone is the victim of bigotry, it's Donald Trump:

Well, he said much more than that. That was part of the statement. He then went on to say other things [...]

Look, he said mostly about Obama, that whole question was about... I don't have to defend President Obama. He's not gonna defend me. So whether you agree with the man or don't agree -- and there were people in that audience, as you probably noticed, that did agree with him.

So, hey, let's put things in perspective here. It's not Donald Trump's job to decide what truth is, especially when it comes to the possibility -- which many, MANY people besides Donald Trump have talked about -- that Obama is a Muslim. He's just saying.

Pelley pressed on, asking if it wasn't important for a presidential candidate to speak up in the face of something like that: "Here you had a bigot..."

Pelley incredulously asked if saying "there's a problem in this country and it's Muslims" might just possibly be seen as a tad bigoted, at least in a theoretical sense whereby slurring everyone in a group as a national problem could be considered bigotry of a sort (with Scott Walker out of the race, journalists are once again feeling free to ask hypothetical questions, it would seem).

Well, he said there's a problem in this country and it's Muslims. All right. I love the Muslims. I have many, many friends -- people living in this building, Muslims. They're phenomenal people. But like everything else you have people where there are problems.

Glad to clear that up: We can't be sure there's anything bigoted about the guy who said that America has a Muslim Problem and that we've got to "get rid of them" -- and maybe he only meant we need to get rid of the jihadi training camps that exist only in the minds of internet wingnuts, in which case, problem already solved! But Muslims, well, 19 of them from other countries hijacked airplanes and killed thousands of Americans fourteen years ago, so it's certainly not bigoted to keep a wary eye on the 2.6 million Muslims in America. They've really been a problem, you see.

Besides, do we even know that the guy wasn't a plant from the Democrats or Karl Rove, to make Trump supporters look anti-Muslim, exactly like the polls say they are?