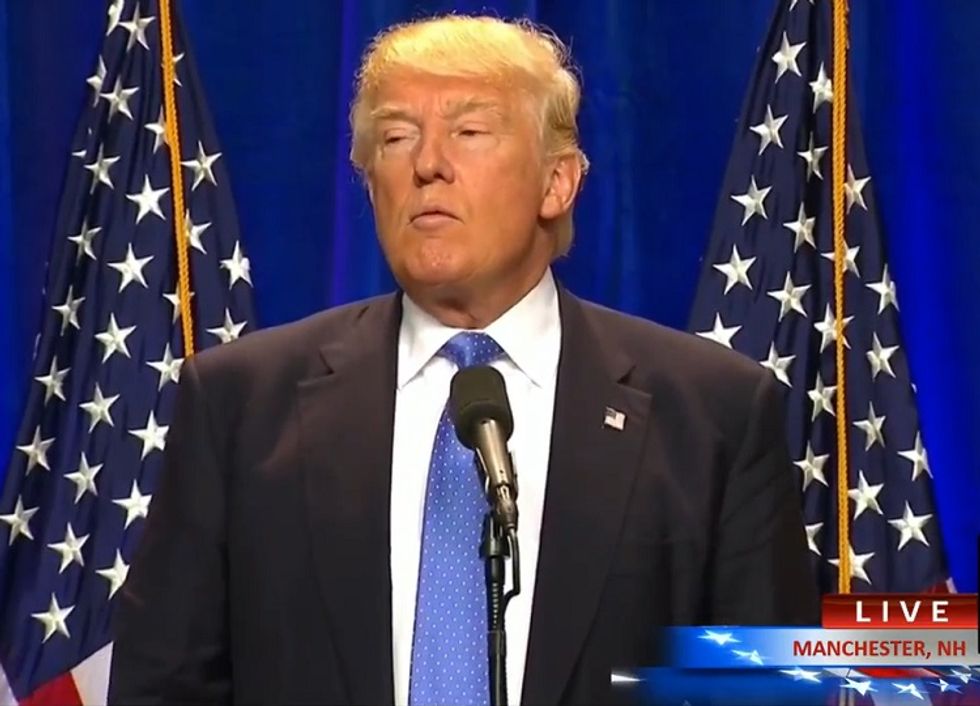 In a speech delivered in Manchester, New Hampshire, Monday, Donald Trump explained how U.S. immigration policy killed 49 people at the Pulse nightclub this weekend; how Barack Obama is a very Bad Ally, unlike Donald Trump; and how Hillary Clinton, trust me, she is just terrible. Here is how Donald Trump began a very serious, very important speech about the national defense:

This was going to be a speech on Hillary Clinton and how bad a President, especially in these times of Radical Islamic Terrorism, she would be.

Even her former Secret Service Agent, who has seen her under pressure and in times of stress, has stated that she lacks the temperament and integrity to be president.

There will be plenty of opportunity to discuss these important issues at a later time, and I will deliver that speech soon.

Well, we are pretty excited to hear that speech, but for now, this one will have to do.

(Speech starts about 11 minutes in.)

The killer, whose name I will not use or ever say, was born in Afghan ["an Afgahn"?] -- of Afghan parents who emigrated to the United States. [...] The bottom line is that the only reason the killer was in America in the first place was because we allowed his family to come here.

That is a fact, and it's a fact we need to talk about.

Oh, teleprompters -- Trump's prepared text very carefully said only that the shooter was "born of Afghan parents who emigrated to" the U.S.A., so obviously, since Trump also wants to do away with birthright citizenship, he was never really an American, no not really. As Rachel Maddow pointed out, "The killer was actually born in Queens, New York. Just like Donald Trump." But what about the citizenship of presidential candidates whose mothers immigrated from Scotland? Their loyalties should be examined very carefully at least.

Trump went on to explain that we're simply drowning in immigrants, and we have absolutely no control over the hordes of scary foreigners:

We cannot continue to allow thousands upon thousands of people to pour into our country, many of whom have the same thought process as this savage killer.

Except for how, you know, he grew up here and acquired that thought process along the way. Maybe we need better thought monitoring. Don't worry, Trump has ideas about that, too.

Trump went on to claim that Hillary Clinton "says the solution is to ban guns," and to abolish the Second Amendment, which of course she doesn't, but why would anyone care whether Trump lies? What kind of ridiculous standard do you want to hold him to? He explained that firearms restrictions did nothing to stop the Paris terror attacks, which he's certain could have been stopped if only some guy in the Bataclan nightclub had had a pistol, then all the terrorists with automatic weapons could have been stopped.

But you'll be glad to know Trump plans on meeting soon with leaders of the NRA to "discuss how to ensure Americans have the means to protect themselves in this age of terror." We're feeling safer already.

Trump warned that Clinton plans to import "vastly more Radical Islamic immigration into this country," because you know how she is with the hating and destroying America. It's probably the top line on her campaign page. Once these Islamic terror hordes have arrived, Hillary will simply ignore them and maybe encourage them to go on murderous rampages, as one does:

Even a single individual can be devastating, just look at what happened in Orlando. Can you imagine large groups?

Having learned nothing from these attacks, she now plans to massively increase admissions without a screening plan, including a 500% increase in Syrian refugees.

This could be a better, bigger version of the legendary Trojan Horse.

We can't let this happen.

Altogether, under the Clinton plan, you'd be admitting hundreds of thousands of refugees from the Middle East with no system to vet them, or to prevent the radicalization of their children.

Donald Trump Tells Syrian Refugees To Go Back To Mexico

Of course, as we've only been saying since last fall, we actually DO have a system to vet refugees, it's a very thorough system. But in Trump's brain, there's no system at all, and that's the only thing that matters. Well, that and some begging the question:

The burden is on Hillary Clinton to tell us why we should admit anyone into our country who supports violence of any kind against gay and lesbian Americans.

Darned if we know why this burden is on Hillary. If Donald Trump really wants to restrict immigration of rightwing Christians and Ultra-Orthodox Jews, he should come out and say so.

Trump also said we must "stop the tremendous flow of Syrian refugees into the united States," a "flow" that as of last November consisted of 2,290 Syrians. Since 2011. We have begun admitting more -- between January and April 2016, a whopping 1,295, most of whom were women and children. Indeed, it is getting hard to get up and go to the fridge for another beer without tripping over one of these Syrian refugee children. If you're fond of statistical comparisons, Donald Trump has told more lies in the last week (including pronouns) than the total of Syrians admitted to the U.S. since the start of the Syrian civil war. (If he can make shit up, so can we.)

Hillary Clinton can never claim to be a friend of the gay community as long as she continues to support immigration policies that bring Islamic extremists to our country who suppress women, gays and anyone who doesn’t share their views.

She can’t have it both ways. She can’t claim to be supportive of these communities while trying to increase the number of people coming in who want to oppress them.

Also, has Hillary Clinton stopped beating her wife yet? Trump also managed to go off script in a thoroughly bizarre digression, in which he suggested that Barack Obama has been oppressing gay people. See if you can spot where Trump leaves his prepared text and begins his weirdass improvisation:

Ask yourself, who is really the friend of women and the LB...and LGBT community: Donald Trump with actions, or Hillary Clinton with her words? I will tell you who the better friend is, and someday, I believe, that will be proven out, bigly. And by the way, the LBGT [sic] community, is just, what's happened to them, is just, so sad, and to be thinking about where their policies are currently with this administration, it's a disgrace to that community, I will tell you right now.

Clinton wants to allow radical Islamic terrorists to pour into our country. They enslave women and they murder gays. I don't want them in our country.

You know who the real friend of the LB, or LBGT, or maybe the Ford GT community is? It is the man who speaks his mind and cares so much about the community, which is a great community, so neglected by the current administration who forces the community into unhappy marriages instead of protecting gays and lesbians from getting married, as Republicans would do. Bigly.

Still, Trump has a point. He asks, "Why would we admit people who support violent hatred?"

Don't we have enough of those running for president already?