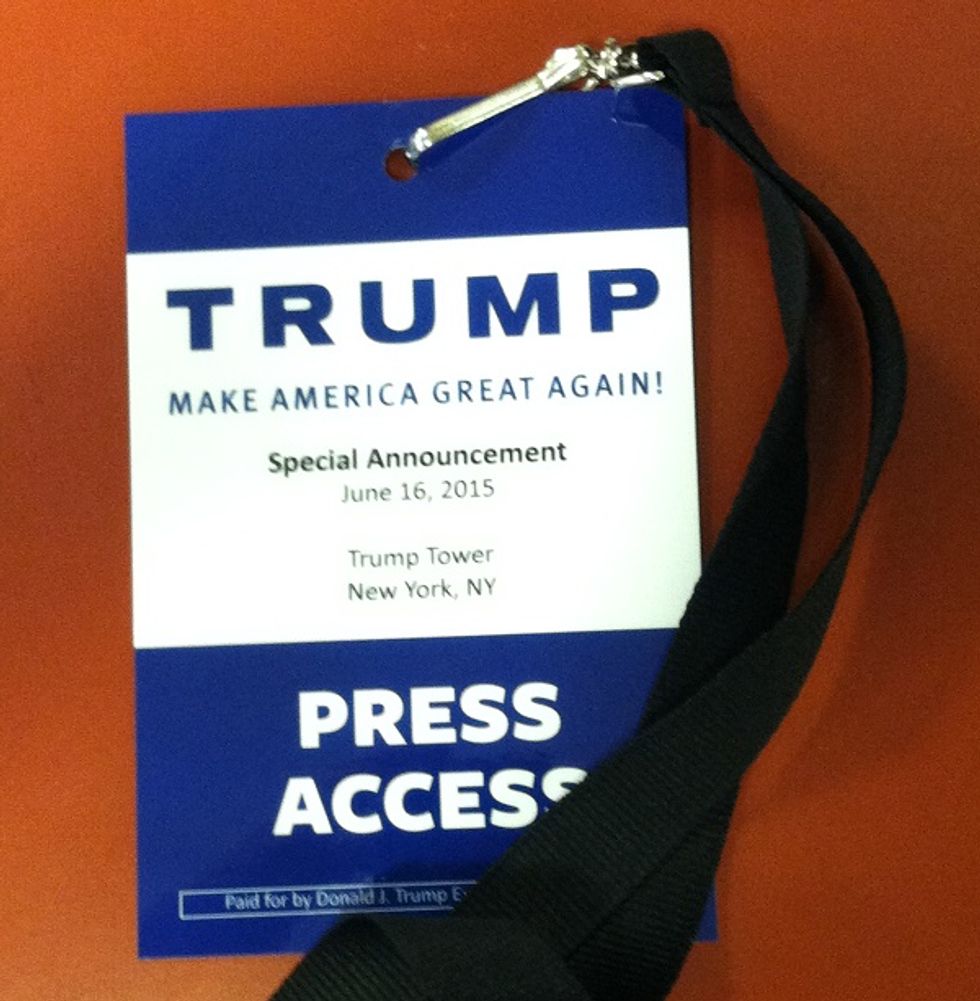 Decrepit sewer vulture Donald Trump finally answered our years of prayers to the comedy gods by announcing he will run for president in 2016. The mogul-shaped puddle of feral rat spooge made the announcement from the yoogest, classiest skyscraper ever constructed by man, Trump Tower in New York City. And yr Wonkette, tired of summering in Connecticut like a drunken dilettante in a Cheever story, thought attending this laugh-fest would be a nice way to spend a morning. Come, let us squint through the glare of the Trump Tower lobby’s miles of marble and gold flake together.

The Trump press office had ignored our email requesting media credentials, so of course we’re not on the list. We are set to pretend to be shocked, but the pretty young thing at the check-in table (there are lots of pretty young things working for Trump walking around) takes our word for it that we’re from the political blog Wonkette, which we have to spell for her. Twice. She hands us a pass on a lanyard and has a bored-looking security guard lead us to the press area.

We’re crammed into this space at the bottom of an atrium in Trump Tower. The first person we recognize is ace Breitbart cub reporter Matthew Boyle. Must be some Dominican hookers nearby! Matt is wearing a tie and blazer. We’re feeling seriously underdressed.

Ed Schultz is also here, apparently upset because the Trump Ice Cream Parlor is closed and hoping there is another branch on an upper floor.

Meanwhile there are dozens of Trump fans, all wearing T-shirts reading “Trump: Make America Great Again!” lining the halls. We’re betting there are as many media people here as members of the public. And yet Trump is out-polling Marco Rubio in New Hampshire. Go figure.

By the way, the pre-speech music assaulting our eardrums? “Memories.” Inspiring! And keeping with Trump’s theme of “America sucks, but I’ll lead us back to the light.”

Trump progeny Ivanka Trump comes to the podium to introduce her father, and a forest of Burberry-clad arms sprouts in the atrium as everyone holds up their phones to snap pictures. We can see nothing, so we just hold up our own phone and hope for the best. We end up with an image that is either Ivanka or her Madame Tussaud statue melting in the sun. Curse our stubby legs.

Then The Donald himself is here, walking onstage to the strains of “Rockin’ in the Free World.” Someone get Neil Young’s lawyer on the line.

Trump is wearing a red power tie and an American flag lapel pin. From this distance, his infamous toupee looks tame, but his eyebrows are so bushy, Simba could be hiding in them, waiting for a herd of unwitting gazelles to wander by. If that’s not a metaphor for Trump running for president, we don’t know what is.

The speech is vintage Trump bullshit. The Japanese are beating us. And the Chinese. And the Mexicans, who are swarming across our border like little brown locusts. Scary and weirdly colored foreigners stealing all our jobs, and money and oil is a huge theme of this speech, though Trump assures us he loves the Chinese and the Saudis who buy apartments in Trump Tower. So let that be a lesson to Mexican migrants: Get some money if you want Donald Trump’s seal of approval.

White supremacy dressed up in a tailored suit and surrounded by acres of expensive marbled luxury is still white supremacy.

If the speech seemed long on television, we can assure you it felt interminable while crammed into the press pen. There is no way this man is a serious candidate for president, but he is pretending otherwise so the assembled members of the Fourth Estate have to pretend right along with him. We hear some laughter and see some eyes roll, but mostly everyone seems bored as they type on their phones or scribble in their notebooks.

Then, mercifully, it’s over. We join the shuffle of ink-stained wretches toward the escalator that will take us back up to street level and blessed freedom. Only a security officer stops us. The Trump family is walking down the short hallway, heading for a nearby elevator. The women are impossibly thin and blonde, and the older sons are so oily they look like they just climbed out of a derrick in the Bakken oil fields.

Then there is the great man himself, pausing to shake a few hands and throw us some thumbs-up. He’s in his element: All the attention of the press and the public, of several cable nets, this whole day is about him, the shyster real-estate developer gone big time. He and his family get into a private elevator, cordoned off behind a wall of security, and then they are gone, headed off to the campaign trail.