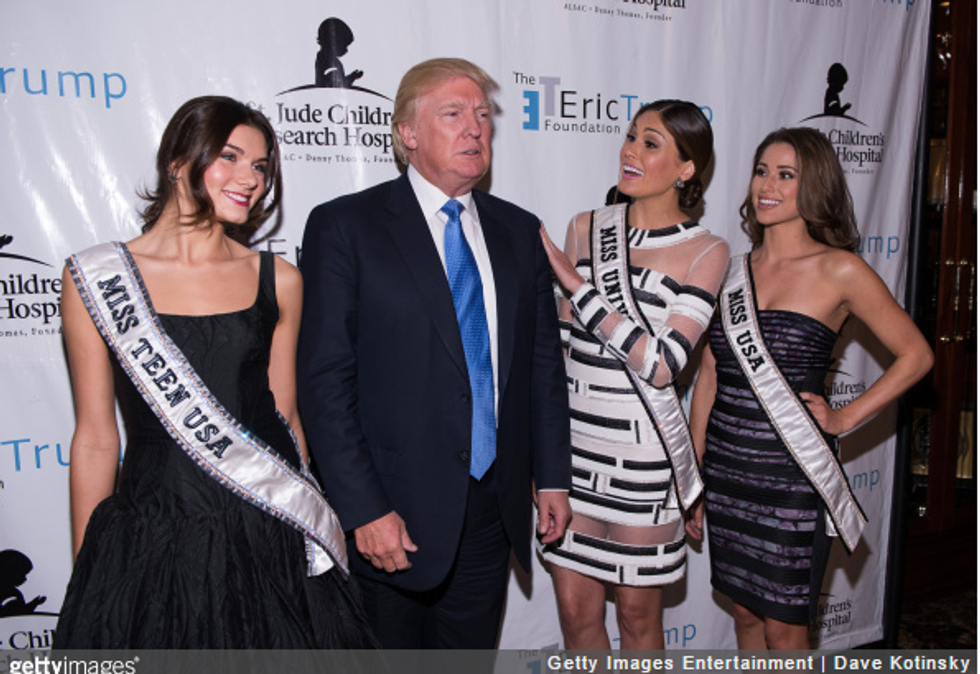 You're not gonna believe this, but there are several new reports of Donald Trump being a pervert around women. We know, brace yourself for the shock. We will tell you today about new allegations that Trump groped four women, and also how he was pretty sure he'd get to bang some 10-year-old girls when they got a little bit older, but first! Turns out Trump was a giant orange ball of Stranger Danger around underage teen girls. Trump now faces allegations that he not only used his position of power to leer at grown-up Miss USA contestants, but also decidedly NOT grown-up Miss Teen USA contestants.

On an April 11, 2005, airing of “The Howard Stern Show,” Donald Trump bragged about some of the special perks he enjoyed while he was owner of the Miss USA pageant. They came not in a locker room but a dressing room.

“I’ll go backstage before a show, and everyone’s getting dressed and ready and everything else,” he said. “And you know, no men are anywhere. And I’m allowed to go in because I’m the owner of the pageant. And therefore I’m inspecting it.” [...]

CBS 2 Los Angeles did a little fact-checking and, guess what, this time, no Pinocchios. Tasha Dixon, Miss Arizona in 2001, told the TV station that Trump just came “waltzing in” while contestants were nude or half-nude as they changed into bikinis.

"You know, the dresses. 'Is everyone okay?' You know, they're standing there with no clothes. 'Is everybody okay?' And you see these incredible looking women, and so, I sort of get away with things like that. But no, I've been very good," he added.

Dixon illustrates the predatory, manipulative nature of Trump using his position in that way:

To have the owner come waltzing in, when we’re naked, or half naked, in a very physically vulnerable position and then to have the pressure of the people that worked for him telling us to go fawn all over him, go walk up to him, talk to him, get his attention.

Dixon adds there was no place to file a complaint about rapey old Trump, because "everyone there works for him."

Gross us out more, Buzzfeed, by making it about underage teenagers:

Four women who competed in the 1997 Miss Teen USA beauty pageant said Donald Trump walked into the dressing room while contestants — some as young as 15 — were changing.

“I remember putting on my dress really quick because I was like, ‘Oh my god, there’s a man in here,’” said Mariah Billado, the former Miss Vermont Teen USA.

Trump, she recalled, said something like, “Don’t worry, ladies, I’ve seen it all before.”

[wonkbar]<a href="http://wonkette.com/607159/donald-trump-thought-some-ladies-on-the-apprentice-were-almost-as-fckable-as-ivanka"></a>[/wonkbar]Buzzfeed says Ivanka Trump, who was 15 at the time, was Trump's co-host for that pageant. And when Mariah Billado, Miss Teen Vermont, complained to her about it? "Yeah, he does that," she said.

Buzzfeed also says it contacted other Miss Teen USA contestants from that year, and several were skeptical Trump could have just gallivanted in and eye-fucked all the kids. Former Miss Maine Teen USA Crystal Hughes went further, saying these girls are lying, probably because they love Hillary Clinton so much. We'll simply point out here that, before Roger Ailes was ousted for sex-sliming on half the female employees at Fox News, there were several women, like Greta Van Susteren, who ALSO initially had a "bitches be lyin'" reaction to the rampant sexual harassment allegations against Ailes by Gretchen Carlson,Andrea Tantaros,Megyn Kelly and others. We'll also note once again that Ailes and Trump are BFFs and birds of a feather in their treatment of women.

[wonkbar]<a href="http://wonkette.com/607121/nobody-gives-donald-trump-credit-for-not-wanting-to-fck-12-year-old-paris-hilton"></a>[/wonkbar]Oh well, at least Trump didn't try to fuck Paris Hilton when she was 12, because that would be too young and off limits. He noticed how hot she was, of course. But he didn't try to bang her.

The Miss Teen USA contest, on the other hand, is open to girls from ages 14 to 19, which we guess is way more age-appropriate, in Trump's mind.

We don't have any reports that Trump grabbed any of these particular adult or teen girls by the pussy, but the second we do, we'll let you know.