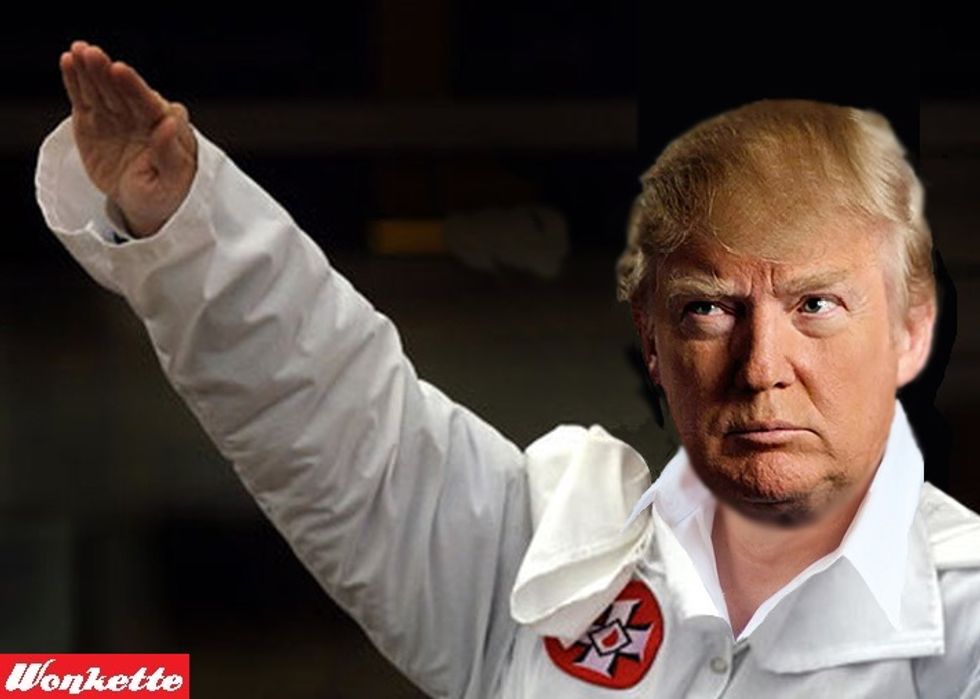 Donald Trump is simply shocked, shocked that anyone would think he's friendly to racist groups, although over the weekend he seemed unwilling to say they were exactly bad. On CNN's "State of the Union" Sunday, Trump refused to disavow an endorsement by former KKK leader David Duke when host Jake Tapper asked him about it:

Trump also insisted that he wasn't about to issue a blanket condemnation of people who might turn out to be really nice folks under their white robes:

I have to look at the group. I mean, I don't know what group you're talking about. You wouldn't want me to condemn a group that I know nothing about. I'd have to look. If you would send me a list of the groups, I will do research on them and certainly I would disavow if I thought there was something wrong. You may have groups in there that are totally fine — it would be very unfair. So give me a list of the groups and I'll let you know.

By Monday morning, Trump had figured it all out and decided he simply hadn't heard the question, because CNN gave him a "lousy earpiece," as he explained on NBC's "Today" show:

I'm sitting in a house in Florida, with a very bad earpiece that they gave me, and you could hardly hear what he was saying. What I heard was "various groups." And I don't mind disavowing anybody and I disavowed David Duke.

[contextly_sidebar id="izvHX7yfdzmywMBbxJjFKFp0UtF1m4Sm"]Strange, since he certainly heard it well enough to claim he'd never heard of this David Duke fellow, whom he had in fact condemned Friday. Trump was happy to disavow Duke, he said, but then Tapper had to go and ask him about "groups," which threw him. Groups and groups! What is "groups"? How can anyone ask Donald Trump to disavow "groups," when he needs all the support he can get? Won't anyone recognize that the real victim here is Donald Trump, who is being hounded by the politically correct media? Besides, as Trump pointed out, he had already disavowed David Duke "all weekend long on Facebook and Twitter. Obviously, it's never enough." Won't anyone cut Donald Trump a break? He's already said he's against Hitler, isn't that enough for you people?

Sadly, even though Donald Trump now has a 100 percent airtight explanation for his remarks, the CNN appearance was enough to lose Trump the love of one media BFF, MSNBC's Joe Scarborough, who said Monday morning he is no longer in love, and he and Donald will are never ever getting back together:

That’s disqualifying right there. It’s breathtaking. That is disqualifying, right there. To say you don’t know about the Ku Klux Klan? You don’t know about David Duke? And the most stunning thing is … this isn’t buying him a single vote. I mean, is he really so stupid that he think southerners aren’t offended by the Ku Klux Klan and David Duke? Is he really so ignorant of southern voters that he thinks this is the way to their heart, to go neutral...when you're talking about the Klan?

We're looking forward to seeing whether Scarborough buys Donald's "earpiece" story. Can this relationship be saved?

Not surprisingly, Trump's opponents in both parties immediately jumped on poor misunderstood Donald. All the Republicans took pains to remind Trump that racial animus has to be confined to dog whistles, after all. Marco Rubio said at a rally Sunday:

We cannot be the party that nominates someone who refuses to condemn white supremacists and the Ku Klux Klan [...]

By the way, not only is that wrong, it makes him unelectable. How are we going to grow our party with a nominee that refuses to condemn the Ku Klux Klan? Don't tell me he doesn't know what the Ku Klux Klan is. This is serious.

Ted Cruz also issued the mandatory condemnation of Trump on the Twitter machine:

John Kasich tweeted: "Hate groups have no place in America. We are stronger together. End of story."

While Ben Carson hadn't said anything about Trump's remarks as of late Sunday, we're sure he'd condemn them, although it's entirely possible he didn't hear the question either.

Bernie Sanders tweeted, "America's first black president cannot and will not be succeeded by a hatemonger who refuses to condemn the KKK," and Hillary Clinton, on hearing about Trump's remarks from a reporter, simply said, "Oh, that's pathetic":

Not everyone was quite so quick to say Trump had misspoken, of course. Mike Huckabee emphasized on MSNBC's "Morning Joe" show that Trump had indeed disavowed the Duke endorsement, adding that you'd have to be crazy to think Trump tolerates racism:

“Does anybody think Donald Trump is a racist?” Huckabee asked. "I don’t. I mean, I really don’t. I don’t know of anything in his life that indicates that this man has racist tendencies.”

[contextly_sidebar id="TaC9VPajSoofetirxh85gyJBs63OuotD"]It's purely coincidental that a whole bunch of open neo-Nazis and white supremacists love him, after all. Besides, Huck added, nobody makes any bones about Hillary Clinton's friendly relationship with the late Robert Byrd, rolling out a racist dodge that's way older than the '69 Charger in "Dukes of Hazzard."

NPR spoke to Paul Noel, who identified himself as a research scientist from Madison, Alabama. He wasn't having any of this nonsense about "racism":

"That is only intended by certain persons to split us apart as a nation rather than solve problems," Noel said. When asked if he was concerned by the fact that there were hardly any people of color at the Trump rally, he responded, "The problem is the black people in America."

Noel said he believes African-Americans are too quick to vote for Democrats.

"American blacks are unsophisticated in understanding that they need to make people earn their vote," he said. "We have had a batch of people who played like race was an issue. I don't see anybody here wanting to hurt a black person or cut their opportunities or anything."

[contextly_sidebar id="h4mgVyWfOrtLQlJau4ho2jzGXLAfSlZ3"]See? No racism at all, except for those unsophisticated blacks who refuse to get off the Democrat Plantation, where they're addicted to all the free Obamaphones, no doubt. Donald Trump has always had a great relationship with the blacks. How great a relationship does he have with the blacks? Well, as his son, Donald Trump Jr. explained on "Fox and Friends," if black celebrities like Whoopi Goldberg don't want to stay in the USA under President Trump, then the Trump clan is perfectly fine with that:

“I’ll buy them their airfare,” Trump Jr. said, laughing. “I’m more than happy to chip in."

Trumpmerica! Love it or leave it, or you're the real racist.