Donald Trump Fixin' To Deport ALL Y'ALL, But *Very Compassionately* 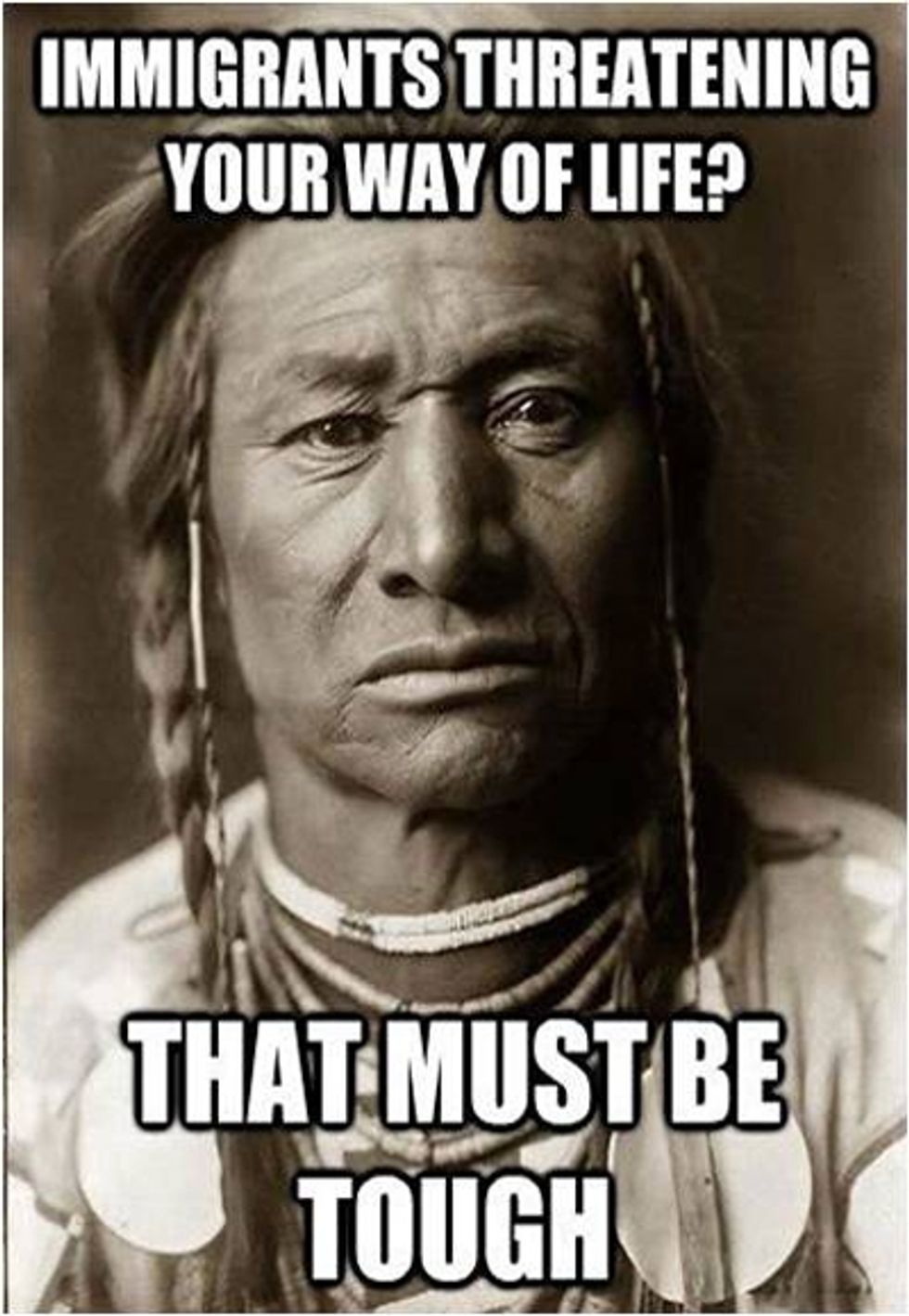 Send 'em all back to Ireland or whatever.

The New Cruelty took a great big step forward this week as the Trump administration released its plans for arresting and deporting undocumented immigrants. You might recall that at one point during the campaign, Mad Lord Snapcase promised his deportation plan would actually be a lot like Barack Obama's, focusing on deporting "dangerous criminal aliens," not your average everyday gardener or housekeeper or mom type person. And it really is focused only on dangerous criminal aliens -- except the Trumpers have now redefined virtually everyone in the country without proper authorization as a dangerous criminal. As of now, virtually anyone who's not a citizen, resident alien, or traveler with a valid visa (aw hell, and sometimes them too) can be considered a "bad hombre," regardless of whether they've committed any legal infraction more serious than the civil offense of not having their papers in order.

Despite the extremely broad reach of the enforcement policies released Tuesday by Secretary of Homeland Security John Kelly, Trump still insisted Thursday morning that the entire mass deportation scheme, which could result in millions of deportations, was actually quite limited, because the man is a pathological liar, duh:

At a meeting with manufacturing CEOs, Trump lied like a lying liar whose lies are run through a Word Salad Shooter:

You see what's happening at the border. All of a sudden for the first time we're getting gang members out, we're getting drug lords out, we're getting really bad dudes out of this country, and at a rate that nobody's ever seen before, and they're the bad ones. And it's a military operation, because what has been allowed to come into our country. When you see gang violence that you've read about like never before, and all of the things, much of that is people who are here illegally. And they're rough, and they're tough, but they're not tough like our people, so we're getting them out.

An analysis of the Homeland Security documents by the Los Angeles Times, however, found the policy actually allows for a far wider range of deportations:

Far from targeting only “bad hombres,” as Trump has said repeatedly, his new order allows immigration agents to detain nearly anyone they come in contact with who has crossed the border illegally. People could be booked into custody for using food stamps or if their child receives free school lunches.

The L.A. Times estimated that as many as 8 million people might be subject to immediate deportation, with wrenching results going far beyond the humanitarian crisis of breaking families apart (because who even cares about those people's families; they knew they were breaking the law when they came here).

Crops could be left to rot, unpicked, as agricultural and other industries that rely on immigrant workforces face labor shortages. U.S. relations could be strained with countries that stand to receive an influx of deported people, particularly in Latin America. Even the Social Security system, which many immigrants working illegally pay into under fake identification numbers, would take a hit.

Anti-immigrant propagandists often claim undocumented workers are a drain on the welfare system, but in reality, all that money going into the Social Security system under fake I.D. numbers is never collected -- migrant workers have Social Security withheld, but they don't try to collect the benefits when they reach retirement age.

The new guidelines encourage immigration officers to treat almost every illegal immigrant as a criminal; instead of deporting only those who were convicted of serious crimes, which was the Obama policy, the Trump rules call for Immigration and Customs Enforcement (ICE) to deport people who haven't even been charged -- anyone who an ICE officer believes has committed "acts that constitute a chargeable criminal offense." And as Terry Pratchett's fictional policeman Sam Vimes observed, "at the end of the day, everybody's guilty of something."

There's exactly one slightly un-terrible aspect of the new policies: Young people who qualified for the Obama administration's Deferred Action for Childhood Arrivals (DACA) -- those who were brought to the U.S. while still minors -- would be exempt from deportation unless they actually commit crimes. Their criminal border-crossing parents, of course, could be deported, as could Central American parents who came to the U.S. illegally then paid to have their children come join them a couple years ago during the Great Child Migrant Panic. Send 'em all back, and tough for them if they're murdered, as several asylum-seeking kids already have been.

Another fun feature of the New Cruelty: Anyone caught crossing the southern border to make an asylum claim, regardless of their country of origin, would be deported to Mexico to await adjudication of their asylum case. Until now, asylum seekers have been allowed to stay in the U.S. until a decision is reached. This policy was announced without any consultation with Mexico, which would be expected to bear the costs of imprisoning Central Americans awaiting action on their refugee cases, which would be handled by teleconferences. Big surprise: Mexico isn't so hot on the idea. Is that even legal? Hell, it's the Trump administration! We don't care!

Former senior Mexican and American immigration officials said it could very well create new security problems along the border, as authorities in each country push unwanted migrants back and forth.

The American Immigration Lawyers Association said that the proposal would violate U.S. law and international treaty obligations. Mexico is as likely to embrace the plan as it did the notion of paying for a wall. “I would expect Mexico to respond with an emphatic ‘No,’” said Gustavo Mohar, a former senior Mexican immigration and national security policy official.

In addition to the broad assumption that all undocumented immigrants are probably dangerous criminals, since they entered the country illegally, Kelly's memos call for the hiring of 10,000 new immigration enforcement officers, expanding the number of detention facilities (hello, big money for private prison companies), and for creating a new office within ICE to assist families of people killed by undocumented migrants. Families of crime victims assaulted or killed by American citizens don't get anything extra, though, because where's the propaganda value in that?

The plan would also renew and expand the "287g program," which allows local law enforcement to be deputized as immigration enforcers, a program that former (we do enjoy that adjective) Maricopa County Sheriff Joe Arpaio was so enthusiastic about that Maricopa County deputies ignored investigating sex crimes and child abuse so they could go do immigration raids instead. Seems like every bad idea from past immigration plans is back! Since Trump has praised Dwight Eisenhower's "Operation Wetback," which deported millions in the late 1950s (he never mentioned the program's name, so it's fine!), maybe we can look forward to U.S. citizens being scooped up and dumped in Mexico again, too.

And how will Trump pay for all the new law enforcement agents and detention centers and god knows what else, maybe border drones and waterboarding robots? They'll get to that later. America's safety is on the line here, even though study after study shows immigrants commit fewer crimes than citizens. But a lot of people are really pissed off at ever having to hear "Press '1' for English," so this is going to be worth every penny, not to mention all the lives that are torn apart. It's not like they're really people, anyway.

Yr Wonkette is proudly ad-free! That means we depend on your generous support to write bitter black humor about this depressing madness we're all living through together. Help us stay inebriated and productive, won't you?