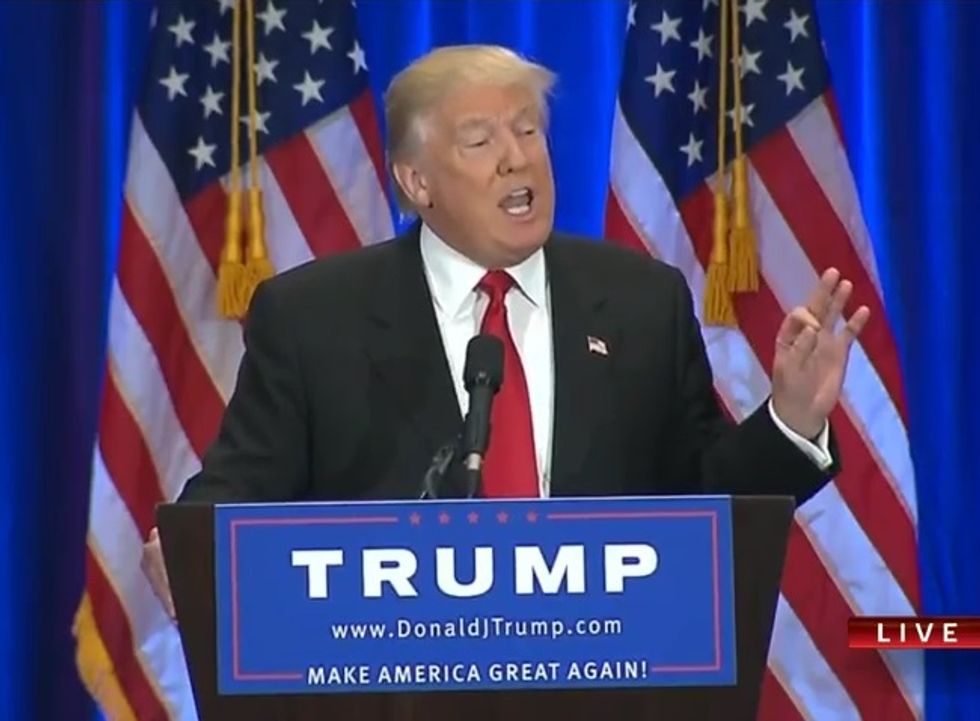 All the lies, none of the energy.

Donald Trump finally gave his Great Big Anti-Hillary Speech Wednesday; he had planned it for last week before the unpleasantness in Orlando forced him to instead yell at Muslims and tell some lies about immigration and why Hillary Clinton hates The Gays. Constrained again by teleprompters, Trump did his very best to sound Presidential, but instead sounded like Donald Trump under heavy sedation. We aren't sure it was an improvement. But it was definitely a Trump event: It was held at the Trump SoHo in New York, so we can look forward to seeing at the end of the month how much the campaign paid Trump's hotel for the day. And he got through the 45-minute speech without saying "bigly" even once.

Speaking to a room of handpicked supporters whose applause seemed every bit as wooden and choreographed as the speech, Trump laid out the usual load of lies, with a few variations on familiar themes, so get ready for some intense media entrail-deciphering to find evidence of the new moderating influence of Paul Manafort. There were a couple of genuinely pathetic standing ovations that would do Charles Foster Kane proud, and masochists can see the whole awful spectacle below. (The actual speech begins around the 35-minute mark.)

Compared to some of his other teleprompter outings, Trump seemed to stick mostly to the text; his ad libs didn't go skittering off into crazy digressions, but for the most part were merely weird repetitions of words from the written text, as if he had developed a bad case of teleprompter Tourette's. As he went along, folks on Twitter were happy to provide instant fact-checks, and the New York Times prepped a quick-n-dirty summary, with helpful annotations for the reality-based community. Let's hit a few highlights!

Much of the speech was based on bullet points from Peter Schweizer's book-shaped object Clinton Cash, which may have set some kind of record for the most pre-publication debunkings before it even hit bookshelves last year. The book argues that Hillary Clinton used her job as Secretary of State to personally enrich herself and Bill, and was full of claims for which Schweizer had little or no evidence. Not that Trump speeches are expected to include facts, anyway. But they're in a book, so that's probably truthy enough for Trump supporters. How credible is Schweizer? Before his book came out, he was publicly worrying that the Clinton Death Squads might come after him, and yet darned if he isn't still alive. They may be waiting to come after him with a sneaky slow-acting poison which will kill him in thirty years, at which time the murder will be officially ruled to have been "old age."

Among the other fun lies Trump spouted was that Clinton "accepted $58,000 in jewelry from the government of Brunei" -- which could only be considered "true" if you ignored the detail that, as with all gifts given by foreign leaders to government officials, Clinton turned the jewels over to the government exactly as required under the law. The stuff "must go to the National Archives or General Services Administration, unless recipients reimburse the U.S. Treasury for them." Clinton didn't keep 'em. Still, the gift gave Trump the chance to suggest Clinton obviously agrees with everything the Sultan of Brunei does, especially his offenses against the LGBT community:

The Sultan of Brunei has pushed oppressive Sharia law, including the punishment of death by stoning for being gay. The government of Brunei also stands to be one of the biggest beneficiaries of Hillary’s Trans-Pacific Partnership, which she would absolutely approve if given the chance.

And speaking of the TPP, we liked the bit where Trump took credit for pushing Clinton to finally say she opposes it. Which really she doesn't, of course, because she's a liar. Silly us -- we thought if anyone deserved credit for Clinton's opposition to the TPP, it was Bernie Sanders, the guy she was actually running against in the Democratic primaries.

Trump also tried to pretend he was taking a more nuanced position on some issues. That whole ban on Muslims thing that he said last week might have to be expanded? In his New York speech, that had morphed from something patently unconstitutional into something that was merely impossible, plus a gratuitous lie. Speaking of Syrian immigrants, Trump said,

I only want to admit people who share our values and love our people. Hillary Clinton wants to bring in people who believe women should be enslaved and gays put to death.

Again with how Hillary Clinton can never be a friend to the gays because she does the Sharia. It would be a little more convincing if Trump could manage to choke out the phrase "the LGBT community" without sounding like he was trying to order a sandwich. Nonetheless, the New York Times jammed its tongue deep into its cheek and tried to take Trump's new tack seriously:

Mr. Trump has proposed temporarily barring all noncitizen Muslims from entering the United States; he has never made distinctions about Muslims who “share our values,” and it would be impossible to verify that immigrants “love our people.”

Trump also repeated his thoroughly-debunked claim that immigration authorities have no way to screen refugees for potential terrorist ties. Since he repeated his lie, we'll repeat the debunking: Refugees actually face a two-year screening process that's far tougher than any vetting faced by students, tourists, or people who get visas for investing in real estate owned by Donald Trump's son-in-law.

As Trump wound up, he struggled more to resist the impulse to ad-lib, resulting in some beautiful moments in the transcript where the script and the Trumpetition collide, leaving only subatomic particles of meaning:

I'm also going to appoint great Supreme Court Justices. So important. One of the most important factors in this election. I'm going to have many appointments, could be as many as give. Probably will be three, could be four. One of the really big factors in this election. We are going to appoint Supreme Court Justices who will be outstanding. Outstanding. So important.

We think he wanted to say something about Americans in America there. Bigly.

[wonkbar]<a href="http://wonkette.com/602830/trumps-favorite-clinton-fantasy-author-awfully-fond-of-n-word"></a>[/wonkbar]So here is your new, more disciplined, more "Presidential" Donald Trump for the next few hours, at least until he goes on "Fox & Friends" and starts babbling stuff from one of his other favorite Clinton conspiracy books.