Donald Trump Has Come Up With The Solution For Drug Deaths, And It Is Bootstraps! 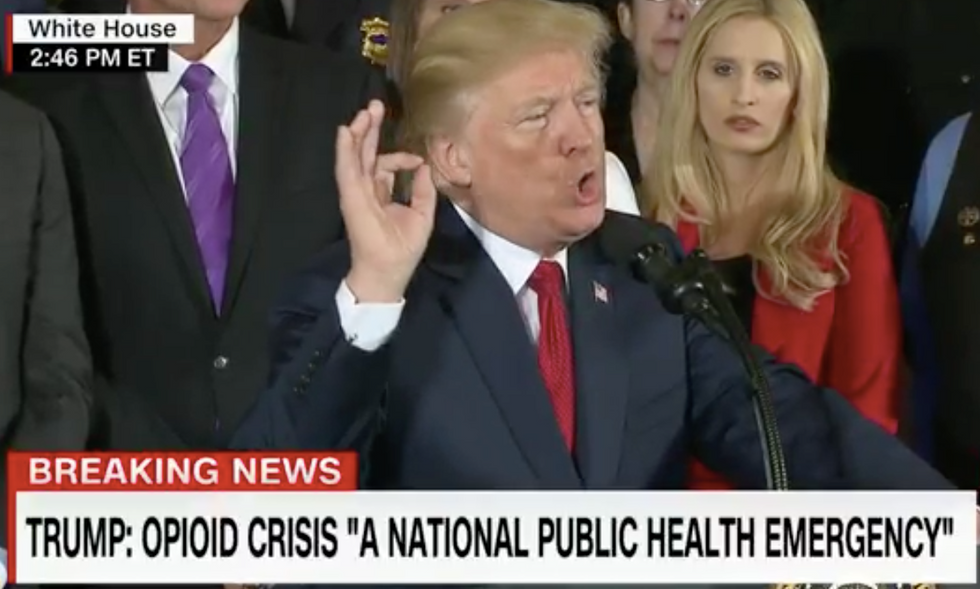 This afternoon, the President declared a Public Health Emergency in response to the epidemic of opioid overdoses that is killing 170 Americans every day. Which is all well and good. We're certainly not opposed to allowing doctors to treat patients in Appalachia over Skype. But it's just a lot of one-handed clapping if you're not going to spend any more money on the problem. And we're not.

President Trump: "There is nothing desirable about drugs. They're bad." https://t.co/l0dZgpa0j1https://t.co/AwaVSaudh9

It all started so well! Donald Trump dropped some knowledge on the kids.

Then Tom Price and Kellyane Conway hopped on a private jet and flew around the country on a "listening tour." Chris Christie assembled a commission of experts, only to throw out two-thirds of their report in hopes that Donald Trump would read it. Via GQ,

He's much more of a, give him a short bit of writing and then verbally talk to him. And that's what we did on the report.... I wrote the report for him. It's not like a white paper that is 80 pages that he wouldn't look at. I knew who my audience was.

Trump even demonstrated his seriousness by un-nominating that opioid lobbyist for drug czar once the papers got ahold of the story.

Yessir, we were going to get a NATIONAL EMERGENCY. Or so they said on August 10, October 16, and October 18. But today is October 26, so we're getting a Public Health Emergency instead. Instead of allocating more money for drug treatment, we're going to let agencies cannibalize other programs and shift funds to deal with the opioid crisis. Hooray! Oh, and we're freeing up the $57,000 currently in the Public Health Emergency Fund. Please clap.

And if you don't put more money into it, then you're really not doing a goddamn thing. Or, as Sarah Huckabee Sanders puts it,

It's still considered a national emergency but your funding vehicle is different.

By which she means, they're kicking the ball to Congress. Sadly, Congress is busy right now trying to steal money from Medicaid so they can shovel more cash into the bank accounts of the super-rich. And Medicaid is a primary source of funding for drug treatment. But once that trickle down economics kicks in, we'll all be able to afford our own methadone without government help. Many people are saying that the cycle of dependence causes drug addiction. The only cure is bootstraps!

And we don't mean to sound churlish, but we are old enough to remember when the solution to the crack epidemic was mandatory minimums and three-strikes laws. We are very glad to see that our understanding of addiction as a disease has evolved in the past 25 years. Via WaPo:

The Department of Labor will make Dislocated Worker Grants available to those with opioid addictions and others who were dislocated by this health crisis or who have had trouble finding work because of their addiction.

But we can't help noticing that this understanding coincided with the arrival of opioids and methadone in rural, white-people parts of the country. So anyone talking shit about the crime problem in Chicago and Baltimore is cordially invited to go fuck themselves.

Too subtle? We mean you, Donald Trump. GFYS!

Click here to fund the snark! We're relying on you, Wonkers!