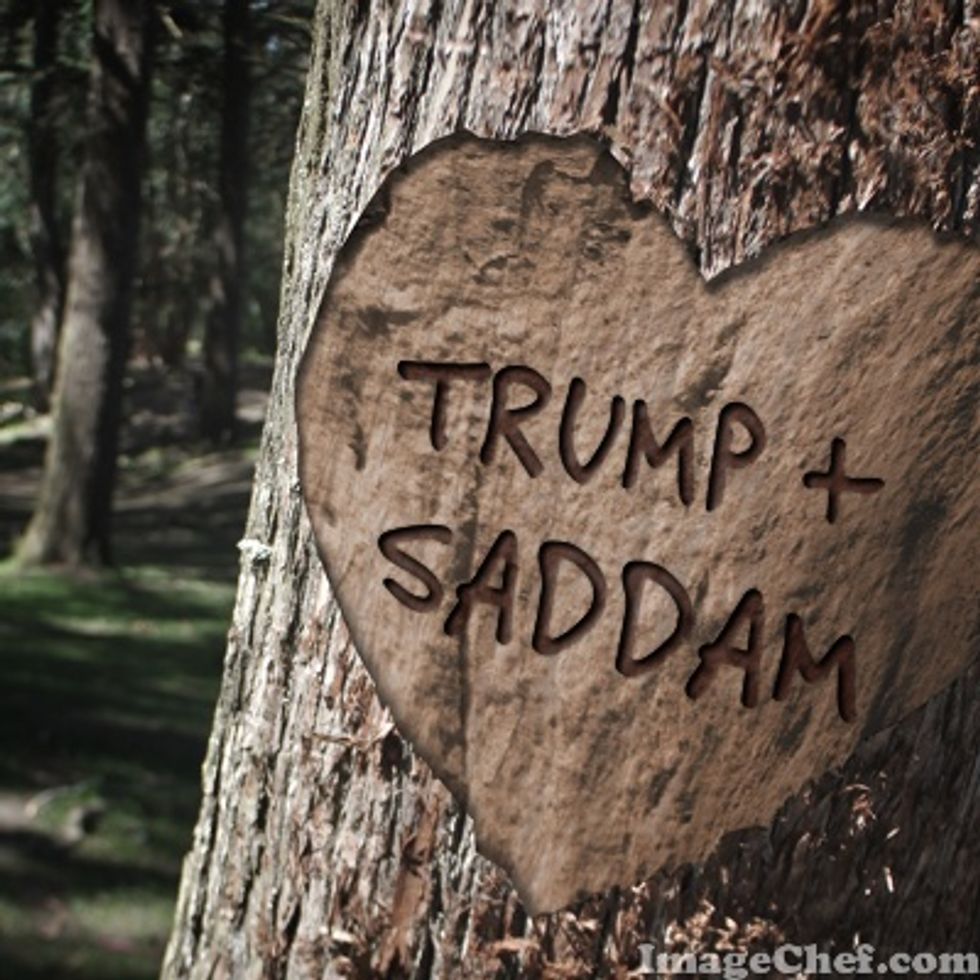 Donald Trump just loves him some totalitarian dictators; he can't help it. It's how he operates. So it shouldn't be the least bit surprising that at an appearance in North Carolina Tuesday, Trump had to go and admire what a terrific job Saddam Hussein did when it came to stopping terrorists. He did at least mention that Saddam was "a really bad guy," so he's covered. But man oh man, you shoulda seen how awesome Saddam was when it came to fighting terrorists (and anyone else he decided, on a whim, was an enemy of the State):

Moments later, he added that after Mr. Hussein’s country was destabilized by the 2003 invasion under President George W. Bush, it became a breeding ground for terrorists.

“Today, Iraq is Harvard for terrorism,” Mr. Trump continued. “You want to be a terrorist, you go to Iraq. It’s like Harvard, O.K.? So sad.”

If only we could be more like Saddam when it came to terrorists. Just take 'em out. And their families. And other people who haven't earned due process, like that traitor Bowe Berghdahl, who Trump also fantasizes about shooting. And protesters. We used to be tough on protesters. Now we have to be nice to them. What's happened to our beautiful country, where we used to be able to just shoot people or at least rough them up?

The New York Times gently reminds us that this isn't the first time Trump has pined for the good old days of the Iraqi strongman, noting that "Mr. Trump’s warm words about Mr. Hussein date to the Republican primary in South Carolina, when he first said that the strongman stood out for killing terrorists."

Now, we hope you're sitting down for this one, but the Times also points out that Trump's fond reminiscences of the Iraqi dictator "are not grounded in fact." It's true that Iraq wasn't an ally of al Qaeda -- no matter how much the Bush administration wanted that to be true, and used it as one of several pretexts for the 2003 invasion. But the State Department did list Iraq as a state sponsor of terrorism for years before the invasion. Oh, and maybe he did some other bad stuff?

In the 1980s, Mr. Hussein fired scud missiles at Israel and used chemical weapons on tens of thousands of Iraqis.

Right, that. Well, you can't really criticize Trump, because he did say Saddam was a "really bad guy."

Confronted with the task of polishing yet another steaming turd laced with large chunks of undigested stupid from his party's candidate, House Speaker Paul Ryan simply couldn't bring himself to even pick up the ShamWow. In a guest spot on Fox's "The Kelly File," Ryan said Saddam was

one of the 20th century’s most evil people...He was up there. He committed mass genocide against his own people using chemical weapons.

Yeah, but he was tough on terrorists is the point. Didn't bother with a bunch of dumb old "rights" -- civil or human -- and he got things done. What's not to like? And now we can look forward to a week of Trump backing and filling, explaining he was only talking about Saddam's cracking down on militants, and then not knowing that Saddam gassed Kurds and Shiite civilians because he considered them terrorists, then Trump insisting he really did know that, and no he didn't mean them, and finally Trump will say something incredibly stupid about something else and the Circle of Derp will begin again.

Saddam is, after all, just one more strong man to go into Trump's deck of Admirable Totalitarians Trading Cards, along with Vladimir Putin, the Chinese government (for their crackdown on protesters at Tiananmen Square), and Arab dictators like Moammar Gaddafi and Hosni Mubarak, who also kept things nice and orderly until the rabble overthrew them, and the Saudi royal family, although he thinks they need to pay us more to keep them in power.

All in all, it was a really nice favor Trump did for Hillary Clinton. A day after the FBI handed him a whole bunch of potential talking points about emails 'n' stuff (overblown though that "scandal" is), Donald Trump, true to form, pissed it all away with some bizarre statements that are far more interesting to cover. Let Trump be Trump!