Donald Trump: How Can We Win If Obama Keeps Saying 'ISIL'? 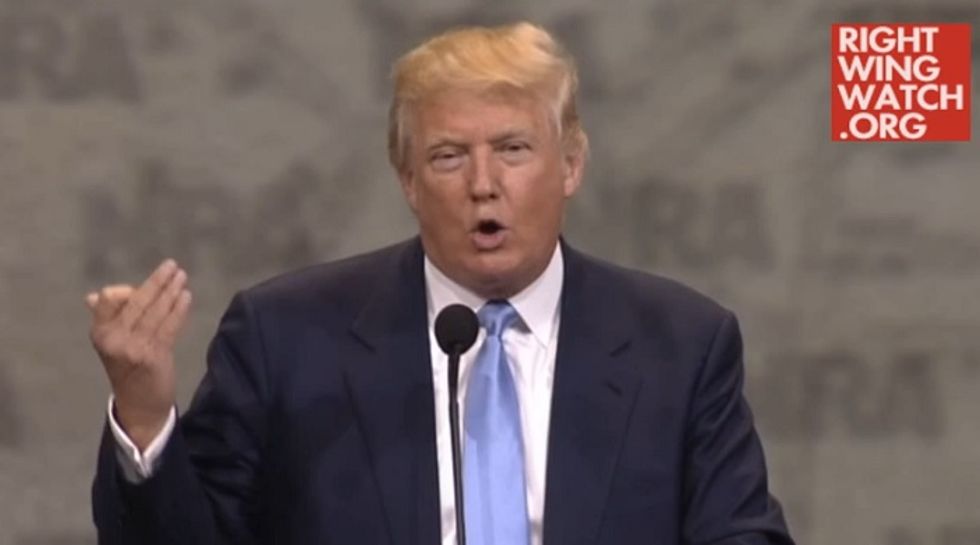 Donald Trump was welcomed to the National Rifle Association's annual meeting this weekend, and of all the minds analyzing the situation in the Middle East, the finely tuned think-organ of Donald Trump is definitely one of them. He has discovered the real reason  the terrorist group known in Arabic as الدولة الإسلامية في العراق والشام (ad-Dawlah al-Islāmiyah fīl-ʿIrāq wash-Shām ) is so darned much trouble: Because our so-called "president" uses the wrong danged acronym for it in English!

First off, Trump observed that come 2016, we are definitely gonna need a new president, which proves that he is a really smart man. We are the Rodney Dangerfield of international relations! "Putin has no respect for our president. ISIS has no respect for our president." We guess what Donald Trump is saying is that he is a lot like Vladimir Putin and ISIS, which is an odd campaign slogan.

And did you ever notice, it's never "ISIS," it's "ISIL." The only one that says "ISIL" is Obama. He’s the only one. He talks about "ISIL," everyone else says "ISIS." He’s got a little reason because there’s a little part of the region -- but he’s the only one. Just not a good person and perhaps -- go ahead, you can hear it, if you believe it.

That monster. If we refuse to call ISIS by the best possible English acronym, which is whichever one Obama isn't using, then we can never win. It's not merely a matter of house style, it's actually proof that Barack Obama hates America or something. Glenn Beck knows it's because Obama wants them to take over Israel. On the other hand, Lt. General James L. Terry, the Pentagon commander who's actually leading the U.S. effort against the group, has adopted the acronym Daesh, which is based on the transliteration of their name in Arabic. Does that make him more correcter, or does it indicate that Obama has ordered our generals to betray America by using foreign words? Or is it a sign of a rift in the administration? The answer is obviously yes.

We need a leader. A strong leader with lots of gold trim. Just remember that despite the daily bombing raids, we aren't actually fighting them, whatever they're called. We need to call them ISIS, so they'll respect us.

Trump also said a lot of other nonsense about how maybe the President cares about the country, or thinks he does, but he's weak, and needs to be strong like bull, and also China is terkin' are jerbs and Mexico is sending its entire population "right through the border and we’re taking pictures and watching them." What should we do about that, Mr. Trump?

Good idea! We should just stop it, problem solved. And the ones who are here already need to be sent back unless they have a green card, and even those ones had better learn English and use the right acronyms, or we as a nation are through, my friend, through. Yooge.