Donald Trump Is Best Populist Guy, Will Do Populism So Great Your Head Will Spin Right Off Your Body 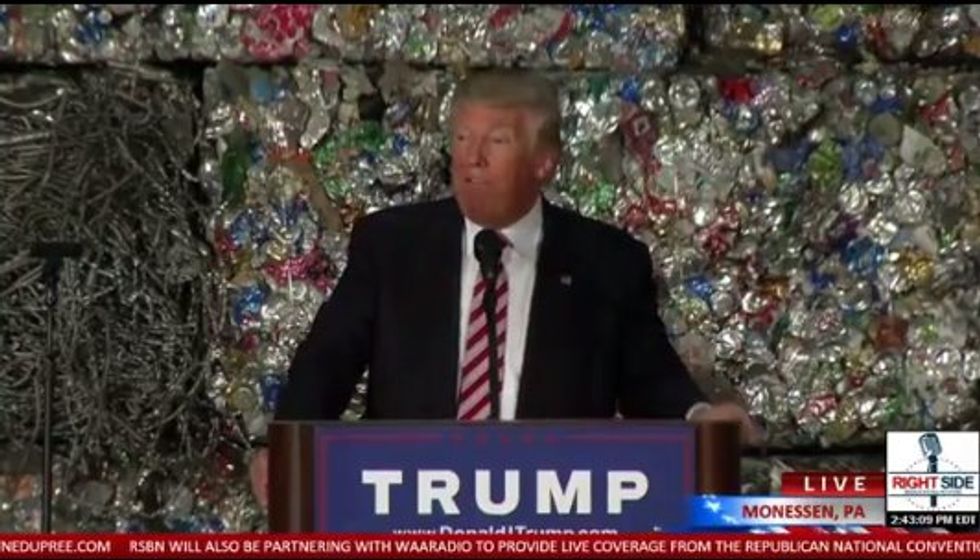 What have we here, Washington Post photographer Marvin Joseph?

Oh, goody, Donald J. Trump has finally given us the detailed low down on how he plans to #MakeAmericaGreatAgain! Trump fired up his teleprompters just outside Pittsburgh Tuesday, and laid out a detailed seven-point plan to give every Great American a high-paid union factory job with health benefits and a pension, like so:

Step 1: Screw foreigners over bigly. Step 2-7: What part of Step 1 did you not understand?

Seriously, it was about that "detailed." Trump gave a book report cribbed from Bernie Sanders about how every trade deal sucks, but NAFTA sucks most of all, then said he'd fix them all by being a better negotiator than the dummies and traitors who set up the current system. Like his plan to finance a Super Wall between the U.S. and Mexico, Trump's "plan" is as dumb about economics as his foreign "policy" plans are about The Foreigns.

Politico posted the prepared text of Trump's remarks, saving us the trouble of having to watch his whole speech, appropriately staged in front of a pile of trash. We read it, so you don't have to!

Photo from @swish on Twitter, who assumes it means Trump will fix economy by collecting cans

His prepared remarks start with a "stab-in-the-back" lie about U.S. manufacturing, in particular the steel industry.

The legacy of Pennsylvania steelworkers lives in the bridges, railways and skyscrapers that make up our great American landscape. But our workers' loyalty was repaid with betrayal. Our politicians have aggressively pursued a policy of globalization - moving our jobs, our wealth and our factories to Mexico and overseas.

This is twaddle. The American steel industry suffered a deep slump in the 1970s, leading to the newspaper headlines and Billy Joel songs that Trump relies on in lieu of actually knowing things. There were a lot of factors involved in that, including dumping of foreign-produced steel, and a lot of American steel mills closed. But international agreements like the World Trade Organization allowed the U.S. to fight against dumping, and the steel industry recovered steadily from the early 1980s to the 2008 fiscal collapse. Today, the U.S. is the world's third-largest producer of iron and steel.

Just look at that post-NAFTA free fall in the '90s!

But no, according to Trump we're all just sitting around cooking hobo beans on the jungle campfire. But he can fix that, pronto!

This wave of globalization has wiped out our middle class. It doesn't have to be this way. We can turn it all around - and we can turn it around fast.

But how, Mr. Cheeto Face?

But if we're going to deliver real change, we're going to have to reject the campaign of fear and intimidation being pushed by powerful corporations, media elites, and political dynasties.

By rejecting Bushillary, slave to the in'erests, and her corporate fat cat media oligarch shills, and voting for populist Every Man Donald J. Worthington Trump the 12th Esquire. Brilliant!

See, according to Trump, the fat cats have battened upon the American middle class by allowing foreign governments to cheat on trade rules. Only by returning to "economic independence" provided by 18th century tariff levels can every kid in Allentown finally get as much as their old man got.

George Washington said that "the promotion of domestic manufactur[ing] will be among the first consequences to flow from an energetic government.”

Alexander Hamilton spoke frequently of the "expediency of encouraging manufactur[ing] in the United States." The first Republican President, Abraham Lincoln, warned that: "The abandonment of the protective policy by the American government… must produce want and ruin among our people."

That was his text, anyway. What he actually said was more Quaylesque. "He understood it much better than our current politicians. That's why he was Abraham Lincoln, I guess."

Our original Constitution did not even have an income tax. Instead, it had tariffs - emphasizing taxation of foreign, not domestic, production.

And how did we get from there to here, so shoeless and bereft of hope? According to Trump, because Billary pushed through NAFTA and let China (pronounced Chuayna!) into the afore-mentioned World Trade Organization. Boom, manufacturing jobs disappeared and China took all our munnies.

Again, that's a popular narrative among yokels and socialists, but it ain't so. U.S. manufacturing employment has definitely decreased, and is down about 40 percent from the late 1970s peak of nearly 20 million workers. But the Chinese didn't terk most of er jerbs; robots did. Computer-automated manufacturing needs far fewer people today than 40 years ago to manufacture everything from onion rings to airliners.

NAFTA occurred WHILE American manufacturing companies were moving factories to Mexico; it didn't cause that. The major change in trade relations post-NAFTA were lowered tariffs on the Mexican side. Auto manufacturing in the U.S. actually increased as a share of exports between the implementation of NAFTA and now. [pdf] Mexico got the lion's share of the benefits, but mainly because they dropped economy-clogging tariffs and were able to buy cheaper products made in the USA and Canada, who both also benefited on a macroeconomic scale. The fact that the 1 percent got most of that benefit is not NAFTA's fault.

Trump claims letting China into the WTO allowed them to just cheat like a bunch of cheating cheaters, devaluing their currency to stimulate exports, blowing up our trade deficit, etc. While every country tries to get the best deals they can, and cheats when nobody's looking (sound familiar?), China is no worse than others.

Trump also said the Trans Pacific Partnership will be more of the same selling out of America's robots, and sure, TPP has some sketchy elements. B. Barry Bamz claims it's a better deal than we currently have in all respects, while Hillary has pushed away from it (we suspect because pro-trade arguments are WAY too complicated and less emotionally satisfying than anti-trade ones that fit on a bumper sticker).

We think she should just soft-pedal the subject (because it is complicated and contentious; half of you are calling bullshit on this very post). But what she COULD do is continue talking about how you improve the quality of real American jobs without waving a magic wand and making it 1955 again. Things like using the tax code to improve infrastructure, education and job training while decreasing fixed costs for workers. Y'know, stuff other than bankrupting the Treasury with tax breaks for richie riches like SOMEBODY wants to do.

Anyways, up to the end Trump's speech wasn't much different from Bernie Sanders's typical stump speech in pushing the trope that trade = screwing the American worker. But his "solutions" read like something he sketched on a napkin at McDonald's. With a crayon.

One: I am going to withdraw the United States from the Trans-Pacific Partnership, which has not yet been ratified.

Two: I'm going to appoint the toughest and smartest trade negotiators to fight on behalf of American workers.

They'll be the most luxurious, smart and tough negotiators you've ever seen, believe me. The best.

Three: I'm going to direct the Secretary of Commerce to identify every violation of trade agreements a foreign country is currently using to harm our workers. I will then direct all appropriate agencies to use every tool under American and international law to end these abuses.

The "waste, fraud and abuse" grift, beloved of the information-bereft.

Four: I'm going tell our NAFTA partners that I intend to immediately renegotiate the terms of that agreement to get a better deal for our workers. And I don't mean just a little bit better, I mean a lot better. If they do not agree to a renegotiation, then I will submit notice under Article 2205 of the NAFTA agreement that America intends to withdraw from the deal.

And if that doesn't work, I will hold my breath until I turn a bluish shade of orange.

Five: I am going to instruct my Treasury Secretary to label China a currency manipulator. Any country that devalues their currency in order to take advantage of the United States will be met with sharply.

Six: I am going to instruct the U.S. Trade Representative to bring trade cases against China, both in this country and at the WTO. China's unfair subsidy behavior is prohibited by the terms of its entrance to the WTO, and I intend to enforce those rules.

How much you want to bet he thought the WTO was a wrestling league as recently as 2015?

Seven: If China does not stop its illegal activities, including its theft of American trade secrets, I will use every lawful presidential power to remedy trade disputes, including the application of tariffs consistent with Section 201 and 301 of the Trade Act of 1974 and Section 232 of the Trade Expansion Act of 1962.

Sure you will, bub; you'll stop China from dumping underpriced crap on U.S. markets just as you've done in the past. In your imagination, which is the only place you'll ever be president other than The Hair Club for Men.