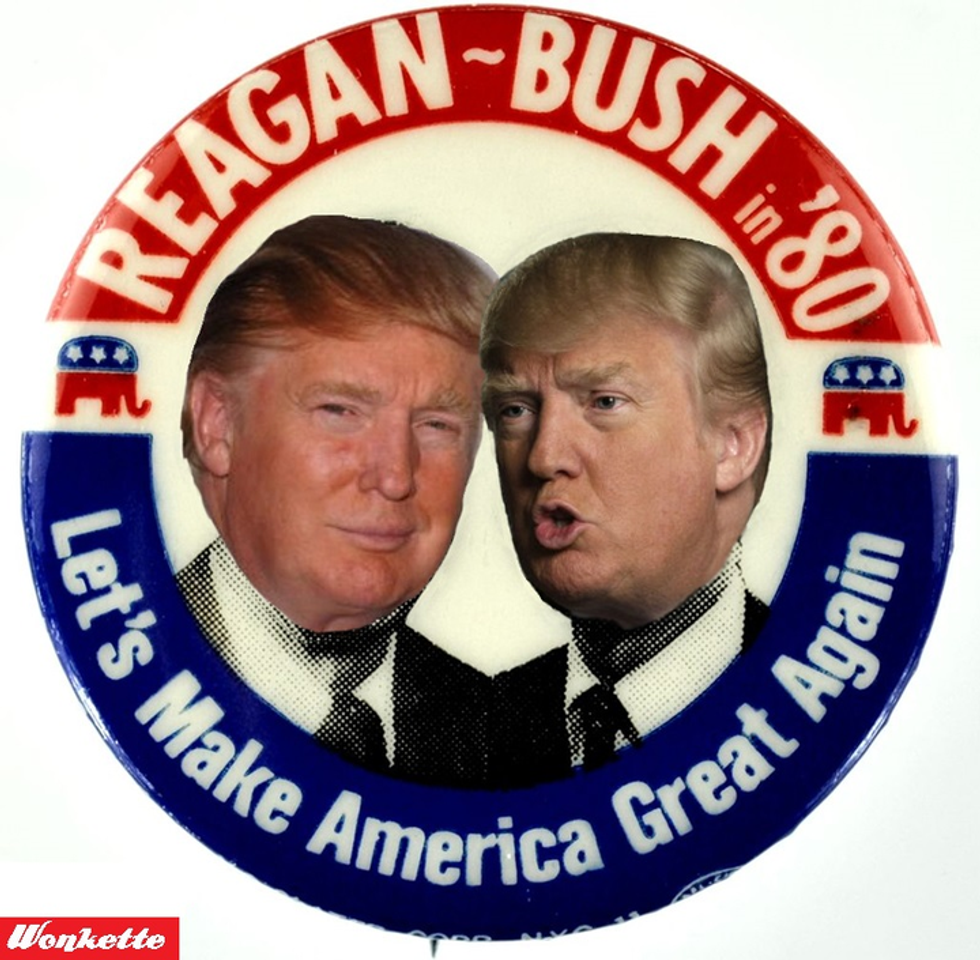 Here is a thing we didn't really expect to see in 2015: a mainstream press article (sorta mainstream, at least -- CNBC.com isn't exactly a niche website like "Marine Propulsion News," whose newsletter we inexplicably got signed up for) with the completely unironic headline "How family values helped Donald Trump build his empire." We saw that and wondered how exactly we could top its snarky winking tone. But no, this is a completely sincere paean to the values that made Donald Trump a great man, and "writer" Eric Schiffer is either a complete Trumpsucking boob or the best satirist since Paul Verhoeven (Starship Trooperswas satire, right? Please?) We just can't tell -- it reads like Waylon Smithers writing a C. Montgomery Burns fanfic.

Note the subtle closing words of this lede:

Watching Donald Trump in action, whether as a prospective presidential candidate or on his show Celebrity Apprentice, can help anyone become a better leader. I know it's helped me at my eight companies.

Why, yes, I too am a business super-genius, an author who is truly worthy of the person I am profiling. We had never heard of this Eric Schiffer person, but he has one hell of an IMDB profile for a guy who has had tiny, sometimes uncredited roles in all of four films and TV shows:

Eric Schiffer is an internationally famous celebrated leader and visionary. A Renaissance man in the truest sense of the word, Eric made his name achieving an unparalleled level of success across diverse fields. A best-selling author, a successful entrepreneur, and a mainstay in New York, London, and Los Angeles high society, Eric Schiffer has founded two companies listed on Inc. Magazine's 500/5000 Fastest Growing Companies, and serves as a trusted advisor to multiple Fortune 500 CEOs, Presidents of Countries, foreign leaders, and Forbes 400 billionaires. He has been featured on the cover of the Saturday Evening Post and Entertainment Today; BusinessWeek named him alongside Richard Branson and Russell Simmons in their list of the Top Ten Entrepreneurs in the World; and he was prominently listed as a Top Bachelor in Cosmopolitan Magazine.

You know, an asshole. This, dear wonkers, is the man's publicity photo:

Again, we cannot rule out the possibility that this is all performance art, like Andy Kaufman's loathsome "Tony Clifton" alter-ego.

But enough about him. Let us learn more of the family values that made Donald Trump worthy of Eric Schiffer's attention! The main thing to remember is that he involves his family, whichever one he has at the moment, in his business! And the family values that have made Trump a success include remembering that "It's ultimately about winning" -- did you know that Donald Trump is not burdened by false modesty? Also, it's important to "Do it your own way," according to Trump's son Eric:

"If you ask 99 out of 100 people, they would all do it that way. He (The Donald) goes, `Why don't you try this? ... He says, `Just trust me. I've been around this block a couple of times,' and he does the exact opposite of what a lot of people would do, and it's turned out remarkably well."

There is a part of us that's perfectly willing to believe Trump has actually mandated that his own children refer to him as The Donald.

Also there are other blahblahblah "rules" about finding hidden competitive advantages and other bullshit you'd expect to find in a tongue bath of vague praise for the "insights" of America's Greatest Dealmaker, who has only filed for bankruptcy four times (it's an opportunity).

Honestly, we couldn't finish the thing, because we were wondering when we'd get to the real Trump family values, like trading in the old blonde for a new one every 10 years or 100,000 miles, whichever comes first, or the importance of slathering your baby in caviar. And always remember, it's fresh caviar for the child's skin, rancid caviar for the customers at your restaurant. Also, threaten to sue people for making you look stupid by letting you be you.

Also, we're definitely setting up a Google alert for this "Eric Schiffer" bird, because he sounds like one hell of a peach in his own right. Look at his twitter feed. JUST LOOK AT IT!

When Donald Trump is sworn in as president, expect The Eric to be appointed Secretary of the Sycophancy.