Donald Trump Is Your New Ronald Reagan, But Dumber And Less Classy 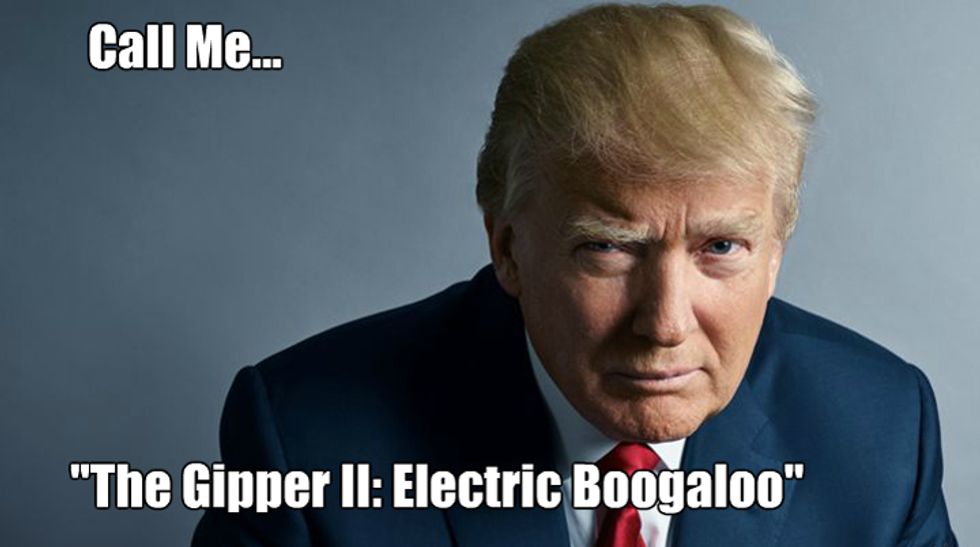 OK, but what if the fucker actually won?

What you kids need to do sometime today -- and we do mean today; don't put this off -- is to go read Paul Solotaroff's terrific profile of Donald Trump in Rolling Stone, which hit the web Wednesday evening and should leave you feeling more than a little unsettled. It's a serious look at a ridiculous human being who is convinced that he will be president of the United States, and the horror of the article is that, more than any other piece we've read about the Ferret-Haired Boy, it makes us begin to wonder if this bombastic shithead might actually get himself elected. Man, are we ever going to be relieved when we turn out to be dead wrong to have worried at all. But what if the bastard pulls it off?

There's plenty in the profile that makes it clear Donald Trump is no intellectual. Solotaroff shows us Trump's fractured mental processes in a hilarious vignette that involves the billionaire lackwit "preparing" for a speech in New Hampshire on his luxurious 757, flitting hyperactively from one idea to another, from New Hampshire's heroin epidemic to ISIS ("We gotta waterboard 'em, don't you agree?"), going over his notes, and then finally delivering his speech:

In those 26 minutes, he'll devote some 90 seconds to his typewritten notes, diverted instead by the mentions of him on Fox and the crowd of whims and tangents in his head. To sit alone with Trump is to be whipsawed and head-snapped by his sentences that start and stop, his thoughts that take hard detours or suddenly become questions in midstream. But as I learn in Hampton, exactly none of this will matter once Donald Trump takes the stage.

It's the loose attention to those notes that made us think, "Jesus. This is like Reagan and his goddamned index cards of clippings from Reader's Digest." And we start wondering: Wasn't the very idea of Ronald Reagan becoming president only slightly less laughable in 1979 than the idea of President Donald Trump seems today? Damned if Paul Solotaroff hasn't written one hell of a compelling nightmare here. After spending 10 days following Trump around and trying (and only occasionally succeeding) to get a straight answer from him about anything, Solotaroff concludes:

What I saw was enough to make me take him dead serious. If you're waiting for Trump to blow himself up in a Hindenburg of gaffes or hate speech, you're in for a long, cold fall and winter.

There, in those words, is his campaign. I am strong; politicians are weak. I speak truth and never retreat; they lie and wave the white flag to our foes. They have stripped us bare; I will build us back, make this country feared the whole world over. Everything he utters is a version of this, dressed in different raiment or reference...

And who cares if it's complete bullshit and he doesn't have any actual policy positions, which only stupid reporters care about anyway? Trump has his middle finger up their ass so deep, and it's hitting just the right spot behind their nuts -- and because he says things a politician isn't supposed to say to you out loud, it feels naughty and dirty and so amazingly good that they are fucking ready to explode. (Ladies, please substitute whatever G-spot imagery works for you here.)

Sure, he's playing the rubes for suckers, like a con artist who becomes the mark's best pal, plays on their fears, their hopes of finally breaking that losing streak, that belief that It's Morning In America again. Except that Trump might be more dangerous because he deeply believes in his product too, which is simply the best, and will have us winning so much that we might even get tired of winning!

Solotaroff also grasps why Trump's supporters love him even though he's a filthy rich billionaire with a mansion and a yacht: He plays a great game of being the Good Rich Guy who shares the resentments of working-class whites who are scared of this strange new America that is no longer great. And he promises to unrig the game just a little, raising his own taxes some and making the jobs come back -- don't ask about details; he'll make incredible deals, tough, smart deals, that will rein in the bad rich guys and bring all the factories back -- once we've kicked out the Mexicans, of course.

Now, if you insist too loudly on pointing out that there's no real wizard behind the curtain, you get thrown out of Oz, possibly retroactively, like the Twitterstorm and compliant Breitbart attack piece that Trump unleashed on BuzzFeed's McKay Coppins when Coppins was insufficiently deferential to Trump last year.

Solotaroff may get similar treatment for a seriously unflattering anecdote near the end of his Trump profile. On the flight back from New Hampshire, Trump and his yes-men are gathered in the plane's dining room, watching news coverage of his speech. Trump mocks Scott Walker and the "staffers at the conference table howl and hoot" appreciatively, and then there's this:

When the anchor throws to Carly Fiorina for her reaction to Trump's momentum, Trump's expression sours in schoolboy disgust as the camera bores in on Fiorina. "Look at that face!" he cries. "Would anyone vote for that? Can you imagine that, the face of our next president?!" The laughter grows halting and faint behind him. "I mean, she's a woman, and I'm not s'posedta say bad things, but really, folks, come on. Are we serious?"

That's the pull quote that's going to be reprinted everywhere for decent people to be disgusted by, as Trump's poll numbers climb a couple more points as well. Donald's already Trumping back the comment, insisting that he was "talking about persona, I’m not talking about looks,” but admitting that yeah, he probably did "say something about Carly, in a jocular manner.” Besides, if anyone gets upset about this, it proves Donald Trump is the victim of a double standard:

“I say that about a lot of people – ‘look at that! That’s not going to be the president,’” Trump said on Thursday.

“When I get criticized constantly about my hair, nobody does a story about, ‘oh, isn’t that terrible, they criticized Donald Trump’s hair,’” Trump added.

In the Rolling Stone profile, we also learn that Trump is still terribly pleased by his bizarre way of complimenting his daughter; after Solotaroff meets Ivanka and compliments her, Trump just can't resist one of his favorite witticisms: "Yeah, she's really something, and what a beauty, that one. If I weren't happily married and, ya know, her father..."

For all of his awfulness, we'll say this much about Ronald Reagan: He never made leering jokes about how he'd have loved to fuck his daughters. But then, Trump is a much meaner, dumbed-down Reagan for a much meaner, dumbed-down America, and he stubbornly refuses to implode. If that prospect doesn't scare you, go give Solotaroff's Rolling Stone piece a read, and then maybe volunteer to register voters. Or look into job prospects in New Zealand.