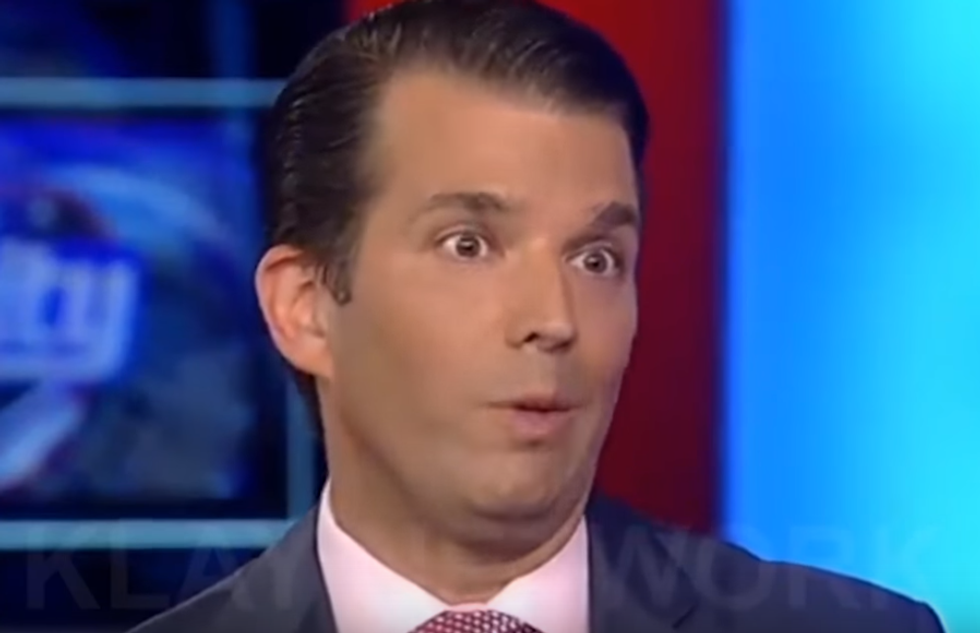 As we speak, wad of flesh and disappointment BabyShits McTrumpenStuff, AKA Donald Trump Jr., is sitting with staffers from the Senate Judiciary Committee, trying to figure out how to weasel his way out of whatever questions they're asking about his Russia ties without getting himself or Daddy in big trouble. Reportedly he's told them he didn't collude with Russia, which is possible. Russia may have simply deemed him too stupid to collude with. We sure as fuck would've.

Ahead of Junior's testimony, the New York Times got its hands on a copy of his statement to the committee about precisely why he took a Russian spy meeting with Russian spies. Was it to get scandalous dirt on Hillary Clinton, like the Russians promised, and to which he responded, "I love it"? Was it just about BOUNCY RUSSIAN BABIES, as he said in his first statement on the meeting? Does he have some new, weird excuse? BINGO, THAT'S THE ONE.

In fact, he has THREE new weird excuses. One is that he felt it was his sworn duty as Donald Trump Jr., heir to the pussgrabbing throne, to at least LISTEN to whatever scandalous information the Russians allegedly had on Hillary Clinton, because he just wanted to make sure the little lady had what it takes to be president. Hell, maybe at that point Junior was an undecided voter LOLOLOL:

“To the extent they had information concerning the fitness, character or qualifications of a presidential candidate, I believed that I should at least hear them out,” he said. “Depending on what, if any, information they had, I could then consult with counsel to make an informed decision as to whether to give it further consideration.”

See? He would find out -- from the Russians -- whether Hillary was qualified to be president. He would do it FOR AMERICAN PATRIOTIC REASONS. Of course, if they gave him some really good shit, he would do that weird toddler bouncy run through the halls of Trump Tower -- you know, the one they do when they're carrying a full diaper load -- all the way to the Trump lawyer's office to see if PLEEEEEEASE can they use the dirty Russian dirt on Hillary PLEEEEEEEASE?

(Also, which Trump counsel? His personal lawyer Michael Cohen, who is also under investigation for all his MASSIVE Russian ties? He probably would've just been like, "Oh you think YOU'RE doing Russian conspiracies for your dad, let me show you MY Russian conspiracies!" Allegedly.)

Junior's second new excuse is a (horseshit) insight into his state of mind when the Russians tried to have foreign relations with him:

... [T]he younger Mr. Trump said he was initially conflicted when he heard that the lawyer, Natalia Veselnitskaya, might have damaging information about Mrs. Clinton. [...]

The acknowledgment by the president’s eldest son that he intended to seek legal counsel after the meeting suggests that he knew, or at least suspected, that accepting potentially damaging information about a rival campaign from a foreign country raised thorny legal issues.

He was CONFLICTED. He was TROUBLED. He was HAUNTED and DISMAYED. Being approached by the Russians PERPLEXED him and sent him into a TIZZY. He was VERKLEMPT and DIED OF CONSUMPTION right there on his FAINTING COUCH.

Yet we guess he didn't tell anybody about the troubles he's seen, not even Jesus.

And what of the part where Dipshit said "I love it!" about the possibility of getting sexxxy dirt on Hillary from the foreign enemy nation? His third stupid new excuse is about that:

“As much as some have made of my using the phrase ‘I love it,’ it was simply a colloquial way of saying that I appreciated Rob’s gesture,” he said in his statement on Thursday.

It's just a thing he says! Collude with Russia to steal the election for Daddy? I LOVE IT. Murder exotic animals in their cribs for sport? I LOVE IT. Get punched in the face repeatedly? I LOVE IT.

Of course, Benjamin Wittes reminds us of the context of Junior's "I LOVE IT":

Exactly. The full quote was "If it's what you say [Hillary dirt] I love it especially later in the summer." So ...

Wonkette salaries are fully paid by lovely readers like YOU! If you love us, click below and donate so we get paid!