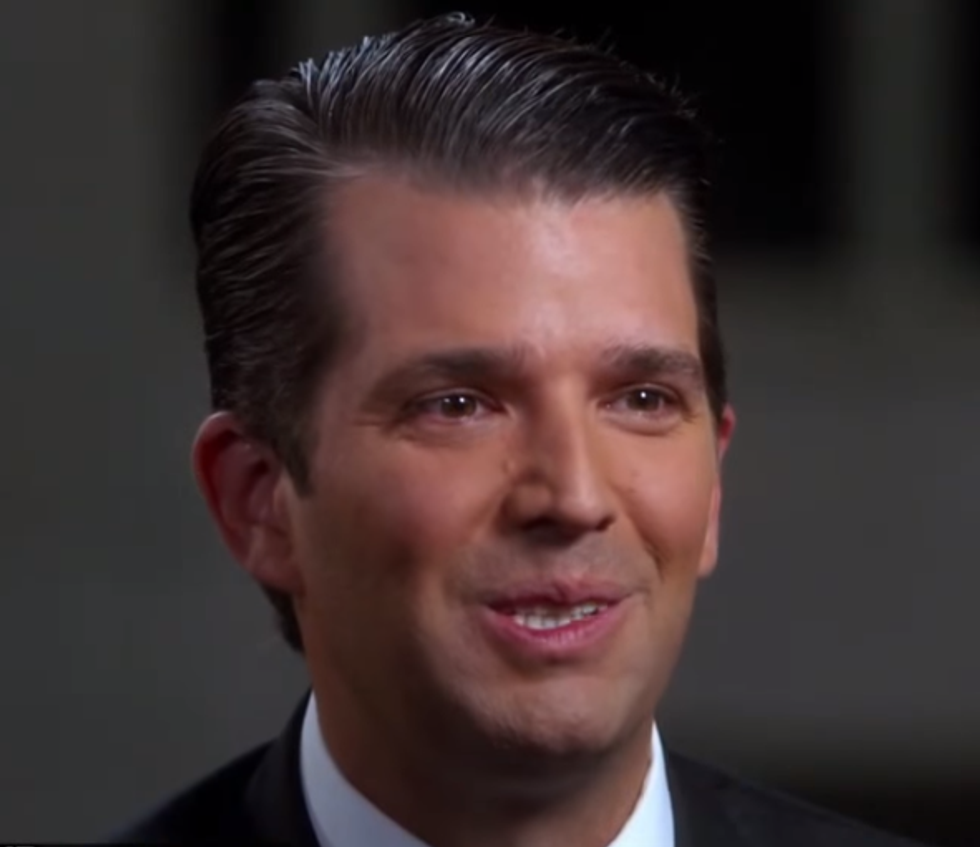 the dumbest thing Daddy ever spermed into existence

Our favorite part of this Buzzfeed story about how General John Kelly, as White House chief of staff, is doing his part to choke off the constant flow of fake news vomit into Donald Trump's baby bird mouth is this:

[SERIOUS JOURNALIST Mike] Cernovich said he's not worried about the choking of information lanes to Trump because, "if it's good enough, Don Jr. will give it to him." The source close to the administration confirmed that fact, though with a far different response.

"Don Jr. is a huge problem," the source said, saying he passes questionable articles to the president. "He needs to be a galaxy away from that place."

Oh dear God. Donald Trump Jr., who was recently promoted to Stupidest Thing Daddy Trump Ever Spermed Into Existence, who probably took that Russian conspiracy meeting because he's a pathetic freak who for some reason still wants the approval of God's Little Mistake in the Oval Office, who retweets bullshit conspiracy theory articles ALL THE TIME, will make sure his father gets his daily bread of fake news. He will go behind Kelly's back, according to Mike Cernovich, because the truth is that the apple didn't fall far from the tree, by which we mean Junior, like his stupid brother Eric, got literally NONE of his mom's good brain genes.

The rest of the Buzzfeed article is the usual suspects bellyaching about how if Trump can't read their alternate reality "news" and has to rely on sources read by people with three-digit IQs, then all their hopes of turning America into an Alex Jones fever orgasm are lost. Lucian Wintrich, the boy child wonder love-baby of Stupidest Person On The Internet Jim Hoft and a dirty gym sock, worries that the "military complex" is doing a coup to the White House, and doesn't even understand why Kelly would try to keep Trump from reading The Gateway Pundit, because they "might get one thing wrong every couple of months," but otherwise they're a respected news webs-LOLOLOLOLOL cannot finish typing that sentence.

AWARD-WINNING JOURNALIST Chuck C. Johnson says it's all OK, because Melania reads his GotNews website (oh, Melania!) and responds, "Is John Kelly going to get between the president and his queen? Good luck, pal." We just ... can't get past the idea that Chuck C. Johnson is trying to convince us that Donald and Melania's marriage is strong enough that he would think of her as his "queen." But hey, maybe she lures him into the bedroom in the residence each night wearing nothing but Infowars exclusives on her bosoms. We are not aware of all their sexual traditions.

And speaking of Infowars:

Paul Joseph Watson, an Infowars editor, [said] Kelly's information directives are "pretty futile given that Trump has a direct line" to far right media, he said in a text message, adding an emoji, smiling with sunglasses.

All these fucking creeps. We just ... how many more days of this shit do we have to endure?

In related news, remember how Trump reportedly gets a folder every day that White House staffers refer to as the "Propaganda Document," which is only full of stories about how smart and sexxxy Trump is? We surely hope he's still getting it, as his tiny self-esteem is very tiny, and he obviously needs it. But Andy Hemming, the White House director of rapid response, whose job it was to find really good news about Trump and send it to the talking heads and the news influencers, has exited the White House building. According to the Independent, it was a "mutual decision" for him to leave. We get that. Trump was probably unhappy that after what were reportedly SEVENTEEN-HOUR work days, Hemming couldn't find any good news about Trump to send anybody. Hemming, likewise, was probably feeling exhausted and dejected (and feeling sorely underpaid, at $89,000 a year, considering the task) doing what the Independent calls an "impossible job," since nobody with any sense has one damn nice thing to say about Donald Fucking Trump.

Hey, maybe they should give the job to Junior, since he's already printing out all the sack-licking articles about his dad he finds, likely highlighting the best parts and decorating them with glitter so Daddy can put them on the fridge in the White House. Junior could just forward those articles to the news people too!

Wonkette salaries are fully funded by lovely souls like you! If you love us, click below to pay us some salaries!