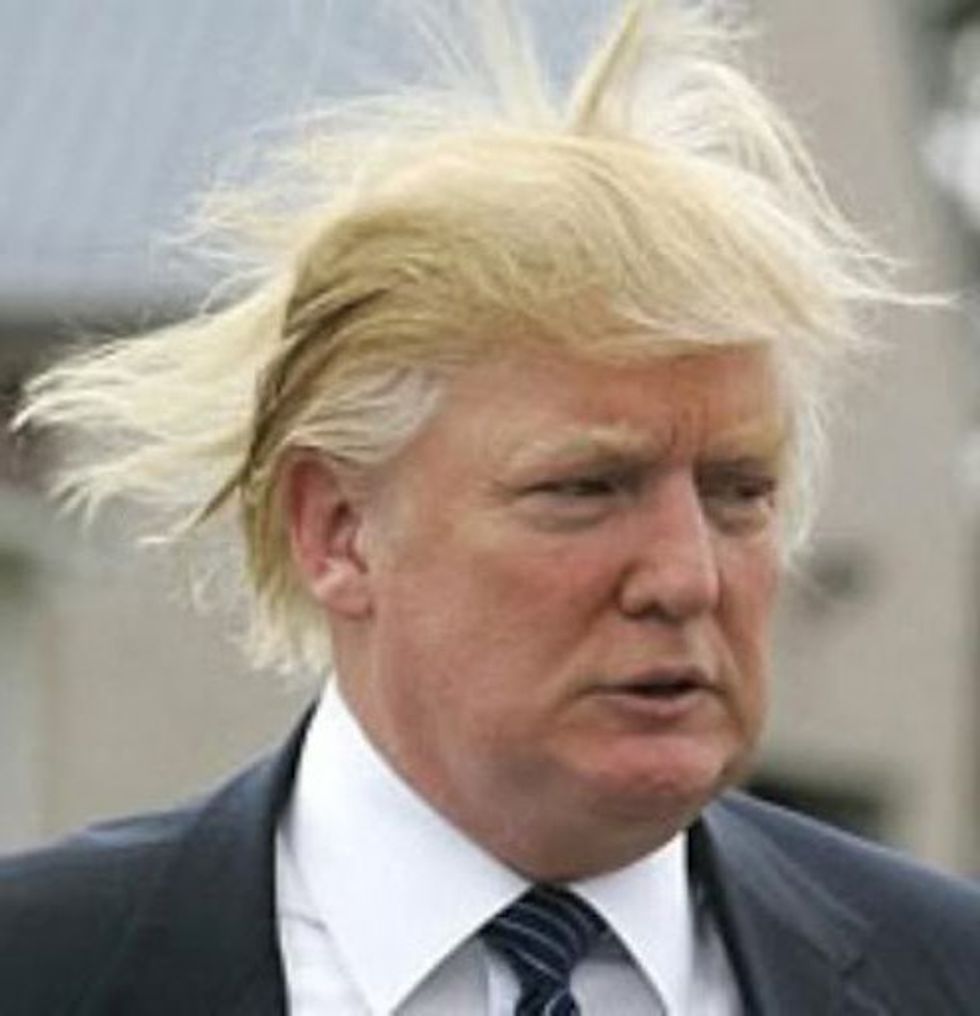 Donald Trump would build a YOOOOOOOGE fence around climate change, if it even existed:

This is just sad, because it reveals that Trump is too weak and stupid to come up with a plan to combat climate change. Because clearly he knows how to deal with all the Mexicans who are rapists, and he has a super-secret plan to do bad things to ISIS, which we assume is the group chopping off heads to which he refers, and we guess the "nuclear climate change" he's talking about in some way involves some tweet he's sent to Iran or some other nation of foreigns.

A real president would have a plan to combat climate change, and that plan would be LUXURIOUS and CLASSY. Apparently, climate change is the one thing that's too sophisticated to be tamed by Donald The Trump, aside from the dumb animal pelt atop his dumb head.

OH WELL. Guess we'll have to listen to him making a bunch more WEAK EXCUSES:

“You look back and they were calling it global cooling and global warming and global everything, but if you look back and the biggest tornados were in the 1890s, the biggest hurricanes were in the 1860s and 1870s. It’s weather. You’re going to have bad weather. So often I watch the evening newscasts and every time there is a rainstorm some place, and then they wonder why they don’t do well, they say, ‘It’s raining here and it’s raining there,’ usually leading the program. I call it weather. Maybe there’s a little bit of change, I don’t happen to believe it’s man-made.”

If it was man-made, it probably would have been built by one of Trump's construction crews, which don't have any Mexican rapists on them, and it would be beautiful and encrusted with gold and diamonds.

For the record, Trump is a fucking moron when he actually says that he "calls it weather." Climate change and weather are two completely different things, and when he says things like this, it leads us to believe that ... WAIT A MINUTE!

Wingnuts ALWAYS have trouble understanding the difference between climate and weather, because they are stupid, which is why they say things like "WHAR'S YR GLOBAL WARMIN' NOW LIBERALS!" while they scoot their anus holes along snowdrifts, but they never actually SAY the words "climate" or "weather." Donald Trump is actually saying their stupid beliefs out loud, back to them, in words which illustrate how stupid they are.

He is trolling this election for his friend Hillary Clinton, it's official, you heard it at Wonkette first, MUST CREDIT WONKETTE.

Anyway, for all the idiots out there, here is your video of Neil deGrasse Tyson -- yes, again, shut up, we love this video -- explaining, with the help of his dog, the difference between climate and weather. It's really not that tough.