Donald Trump Loves Sunday School So F*cking Much, It's Terrific And Elegant And You Get Juice Boxes 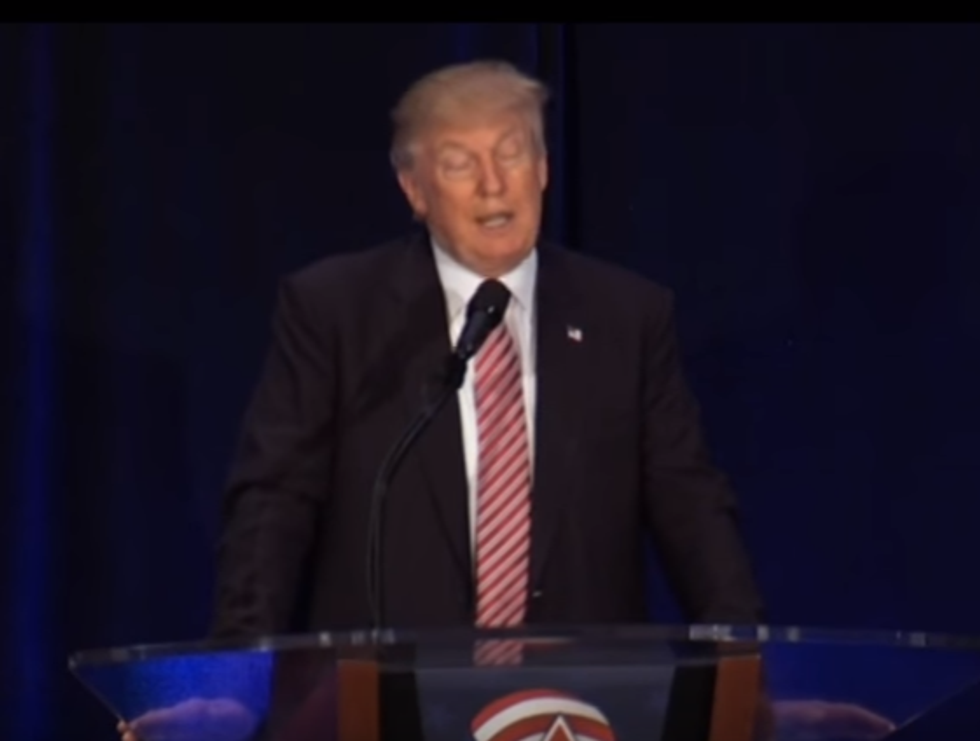 Are you excited to hear what Donald Trump said at the big gay confab for gay-hatin' religious right fuckbrains in Florida on Thursday? You'll remember we LOLed earlier this week at a Washington Post writer who #SlatePitched us in the face about how Trump isn't anti-gay, he's just teaching Republicans how to love the homosexuals in their own special way. It was funny because Trump was headlining a conference of the American Renewal Project, a collection of some of the MOST insane gay-hatin' fools in all of US America, THE VERY NEXT DAY.

The WaPo writer was all "Trump loves the gays so much he mentioned the Pulse nightclub shooting victims while he was inciting anti-Muslim hatred at the RNC!" So what did he say to the bigot group, whose leader David Lane speaks of things like "homosexual totalitarianism"? What did he have to say to Kim Davis's lawyer Mat Staver, who really was grossed out by all the fagalicious love that happened after the Pulse shootings? Buncha horseshit is what.

[wonkbar]<a href="http://wonkette.com/597984/donald-trump-terrific-at-saying-classiest-bible-verses-almost-perfectly"></a>[/wonkbar]He didn't call for the burning of all homosexuals, he didn't cry into his soiled panties about OUR WIVES AND DAUGHTERS making potty with transgenders, he didn't even say God hates fags. Nope, it was just a bunch more Two Corinthians shit about how he loves eating Jesus crackers at church.

Or, more specifically, at Sunday School, which he is planning to Make Great Again. Have you been missing going to Sunday School and drinking juice while you learn all the hand motions to the "Father Abraham had many sons" song since it was unceremoniously banned by Obama? Donald Trump has, it was his favorite:

YOU GUYS HE LOVES SUNDAY SCHOOL SO MUCH HE CAN'T EVEN FUCKING STAND IT. Now, let us illustrate what he was doing with his tiny right hand when he was saying malarkey about "you're going this way, but you're gonna go that way." He was talking about church attendance, and was using his hands to say right now church attendance is going down (with an accompanying downward motion), but when he is preznit, it will go up (with an upward motion). Got it? Here are some screen shots in case you don't get it:

Anyway, his overall point was that wingnut Christians have been "silenced," which is obviously true because we never hear from them anymore, ever. Where have they gone? We should give them a ringy-dingy on the telephone to ask why they are so "silent," that is what we should do.

Trump also says he will repeal the Johnson Amendment, which some of those silenced (and very stupid) pastors claim stifles them from ever saying anything about the political process. Actually, the only thing it does is prohibit churches from explicitly and officially endorsing candidates. But it's an important part of fundamentalist fuckweasels' victimization script, so that's why one of Trump's Jesus pals probably told him to say "Johnson Amendment BAD, Trump GOOD."

That's why, as Right Wing Watch points out, it was kinda funny that he also begged all the pastors and religious right leaders to use their tiny silenced squeaker voices and their undersized influence to make him president. Wonder why he asked them, since they're so weak and sad!

He asked them to pray for him, because he prays for them, obviously a yooooge lie. And please make him president:

Go out and spread the word [like Jesus said to his disciples! - ed.], and once I get in I will do the thing that I do very well. [ogle Ivanka's funbags??? - ed.] And I figure it's probably, maybe, the only way I'm going to get to Heaven, so I better do a good job, OK?

LOL Donald Trump is not going to Heaven, because Jesus does not love Trump, this Wonket knows, for the Bible tells us so.